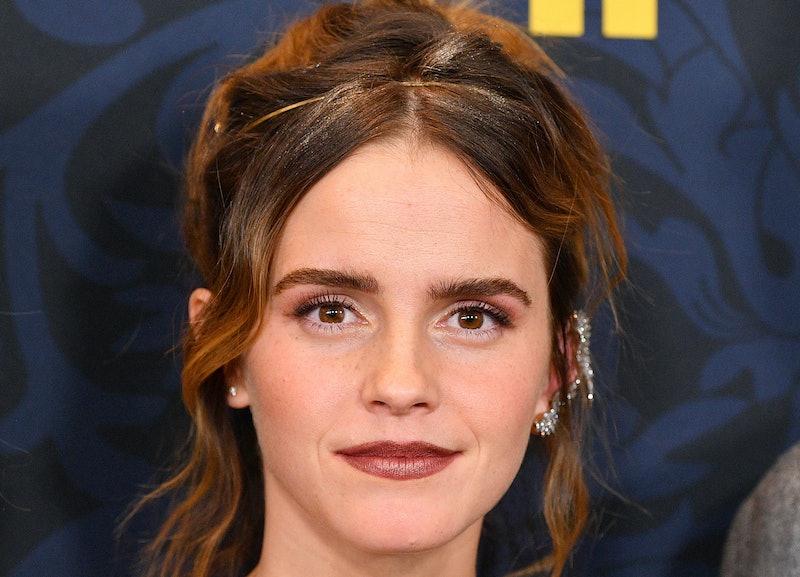 Between starring in a true classic to standing in front of world leaders, Emma Watson has never been far from the headlines in 2019. On the run up to the release of her new movie Little Women she found herself at the centre of a social media storm, but the actor says she's happy people felt empowered by being “self-partnered.” The comment she made almost in passing in an interview for the November issue of British Vogue invoked a big reaction, but Watson's response was as cool as expected.

Watson walked the red carpet in New York last night for the premiere of the adaptation of Little Women, directed by Greta Gerwig and starring the sensational Watson, Saoirse Ronan, Florence Pugh, Eliza Scanlen, and Meryl Streep to name a few. When asked by E! News what her reaction to “self-partnered” going viral was she said, “I literally said it as a throwaway comment, thinking it would go no further, and then I woke up the next morning and my phone’s blowing up and I don’t know why. It’s all my friends messaging me being like, 'Self-partnered, this thing’s gone crazy.'” She continued: “I’m so happy people feel empowered by my stressful moment. It’s great.”

Watson said she considered herself to be “self-partnered” in an interview with Paris Lees for Vogue. As part of the conversation, Watson spoke about what it’s like to be turning thirty and how, despite the fact that she’s a world renowned activist and Hollywood actress, she’s still subjected to the same pressures as everyone else. She said, “I never believed the whole ‘I’m happy single’ spiel. I was like, ‘This is totally spiel.’ It took me a long time, but I’m very happy [being single]. I call it being self-partnered.”

I for one am all too aware of the prying comments and questions from people that come with being single. And Watson’s creation of a “self-partnered” status definitely struck a chord with people. Expanding on what she meant in the interview, she told E! News, “For me, it’s much more about your relationship with yourself and the feeling of you’re not somehow deficient, in some way, because you aren’t with someone. You’re like, ‘I’ve got this. I’ve got myself.’”

Quite fittingly, Watson is starring in the empowering Greta Gerwig adaptation of Louisa May Alcott’s Little Women. The film comes to screens in the UK on Dec. 15, 2019, and has already received recognition by the Golden Globes with Saoirse Ronan receiving a nomination fir Best Actress for her role as Jo. Speaking about her role in the movie, Watson told Lees for Vogue, “With Meg’s character, her way of being a feminist is making the choice — because that’s really, for me anyway, what feminism is about.” I can’t wait to see Watson and the rest of the cast in action.