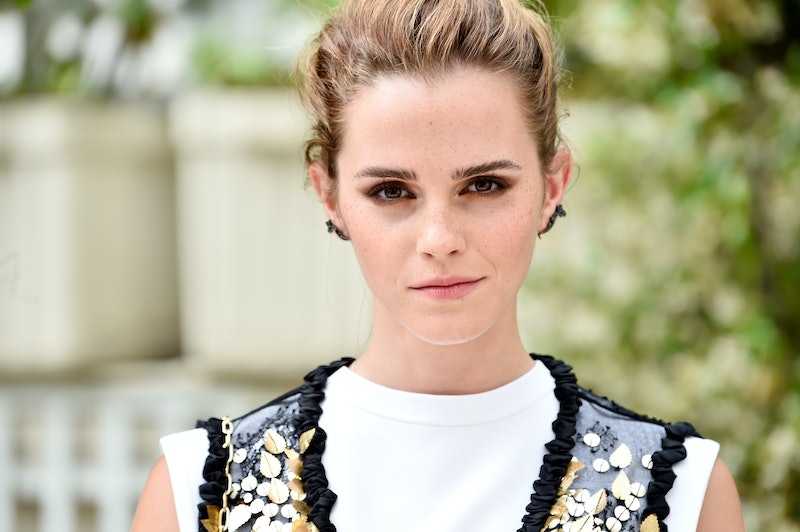 Emma Watson has gone from being a fictional childhood hero to an IRL adult one, working as an activist and UN ambassador alongside her flourishing Hollywood career. But, as with anyone who has a public platform, her love life has always been a hot topic of speculation. But Emma Watson has said she identifies as self-partnered after years of feeling totally differently about being single. There’s no denying that, when it comes to relationship labels, "single" is still a pretty loaded terns, but Watson has flipped it on its head and proven how outdated it is to still be fixated on whether someone is "with" someone.

Watson chatted with Paris Lees for Vogue on the run up to the release of Little Women. Speaking about her relationship status, Watson said:

“I never believed the whole ‘I’m happy single’ spiel. I was like, ‘This is totally spiel.’ It took me a long time, but I’m very happy [being single]. I call it being self-partnered.”

While she has been linked to a few people in the past (including Harry Potter co-star Tom Felton), she has confirmed she isn’t seeing anyone romantically right now and couldn’t be happier.

However, she also revealed she isn’t totally exempt from societal pressures. She said in Vogue, “I was like, 'Why does everyone make such a big fuss about turning 30? This is not a big deal' .... cut to 29, and I’m like, 'Oh my God, I feel so stressed and anxious.' And I realise it’s because there is suddenly this bloody influx of subliminal messaging around.”

It would seem that no matter how far we’ve come, the pressure to couple up by a certain age is still there. Statistics from eHarmony reveal that 81% of singles in their mid-twenties to mid-thirties feel pushed into settling down. "With [these stats] in mind, we need to support our single friends and relatives and stop stigmatising their experiences," says relationship expert Rachael Lloyd. "To echo Emma Watson’s sentiments – independence is an individual choice and you can find happiness and fulfilment without rushing into a hasty relationship."

Watson continues to be a pretty inspirational gal and you can catch her alongside equally phenomenal women, Meryl Streep, Saoirse Ronan, and Laura Dern, in Little Women, which airs Dec. 26-28 at 8.30 p.m. on BBC One.

More like this
4 Surprising Celeb Throuples That Got The Internet Talking
By Sophie McEvoy
Stephen Graham & Steve McQueen Are Working On A Wartime Drama
By Darshita Goyal
Channing Tatum “Nearly Killed” Salma Hayek During 'Magic Mike' Lap Dance
By Sam Ramsden
Jemima Khan Used Her Own Life As Inspo For 'What’s Love Got To Do With It?'
By Darshita Goyal
Get The Very Best Of Bustle/UK
Sign up for Bustle UK's twice-weekly newsletter, featuring the latest must-watch TV, moving personal stories, and expert advice on the hottest viral buys.