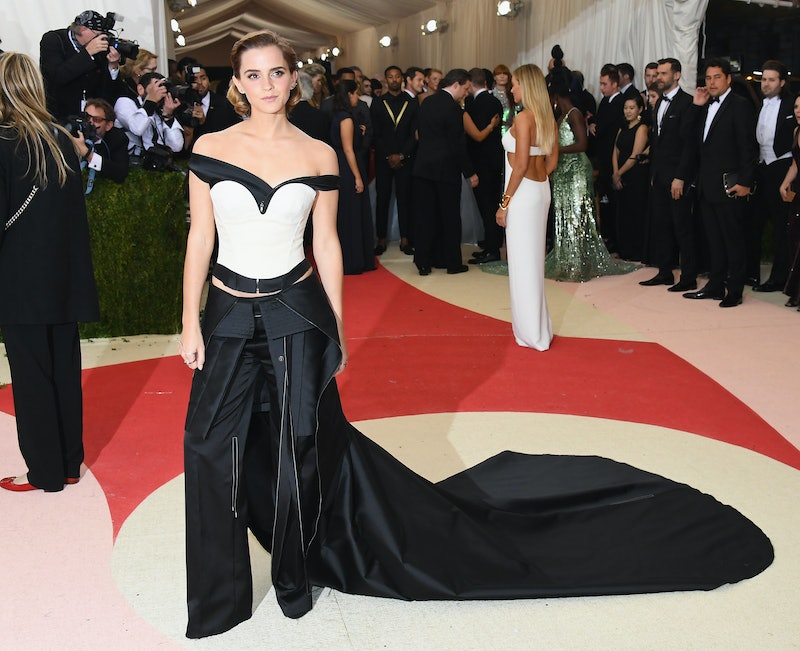 The live action remake of Beauty and The Beast is one of the year's most anticipated movies. And why wouldn't it be? Emma Watson stars as Belle in a feat of genius casting and Downton Abbey's Dan Stevens growling in character as the Beast. The film premieres on March 17, but in the meantime, the Beauty and the Beast sneak peek during the 2017 Golden Globes on Sunday night and viewers got their first taste of Watson singing as Belle, along with gorgeous visuals from the film. It's a clip that'll make fans want to fast-forward the calendar to March already.

The new trailer is the first trailer for the film to featuring Watson singing and she sounds lovely as she belts out the song "Belle." The montage of scenes include Belle entering the Beast's home for what seems like the first time, the Beast's famous rose, a British Chip (remember him?), Gaston being him, and Belle in the famous yellow ball gown made famous by the original Disney animated movie. Dare I say it, the live action version of the classic tale looks even more beautiful and who knew Watson would have such a gorgeous singing voice? She is the perfect choice for Belle.

The sneak peek is one of many preview morsels given to fans in advance of the film's premiere. Last week, a new trailer for Beauty and the Beast premiered, showing some romantic banter between Belle and Beast. Last month, a short clip of Watson singing "Something There" as Belle leaked and charmed the entire internet with its perfection.

If this new sneak peek is any indication, Beauty and the Beast will be worth the wait.

More like this
12 ’90s Movie References You Missed In 'Do Revenge'
By Radhika Menon
Harry Potter's Viktor Krum Has Undergone A Huge Transformation Since Hogwarts
By Sam Ramsden and Meguire Hennes
What Does Nancy Jo Sales Think Of 'The Real Bling Ring'?
By Arya Roshanian
Netflix Reveals First Look At Wednesday In The 'Addams Family' Spinoff Series
By Bustle Editors
Get Even More From Bustle — Sign Up For The Newsletter