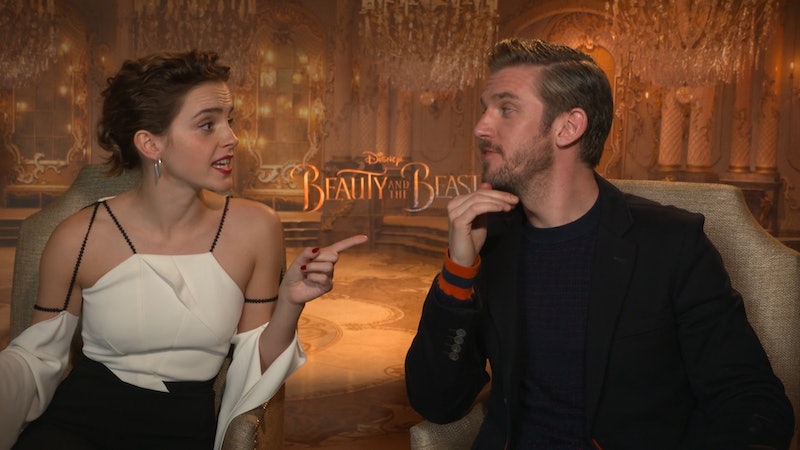 Classic Disney films are known for many things: Princesses, family-friendly morals, impressive animation, and of course — gorgeous, memorable scores (often composed by Alan Menken). With the live action version of 2015's Cinderella, and in 2017 the Emma Watson-led Beauty and the Beast (out March 17), Disney has taken precious care to include all of the beloved songs fans have come to cherish in these rebooted classics. So when I had the chance to sit down with Watson, Dan Stevens, Josh Gad, Luke Evans, Gugu Mbatha-Raw, and Audra McDonald from the upcoming iteration during the Los Angeles press day, I thought it would be fun to test their Disney music knowledge. After all, they may have to croon the songs of Beauty and the Beast on the big screen, but how well do they know other songs from films like Aladdin, Mulan, and The Jungle Book?

So here's how the game went down: I offered the beginning of a famed Disney lyric, then, the cast members in question had to finish the lyric. Simple, right? Well, sort of. While some of the cast knew their Disney hits like the back of their hands, others, well, struggled. And spoiler alert: Gad is basically running this show.

If this doesn't make you want to break out an old karaoke machine and belt out some Disney songs, I don't know what will.