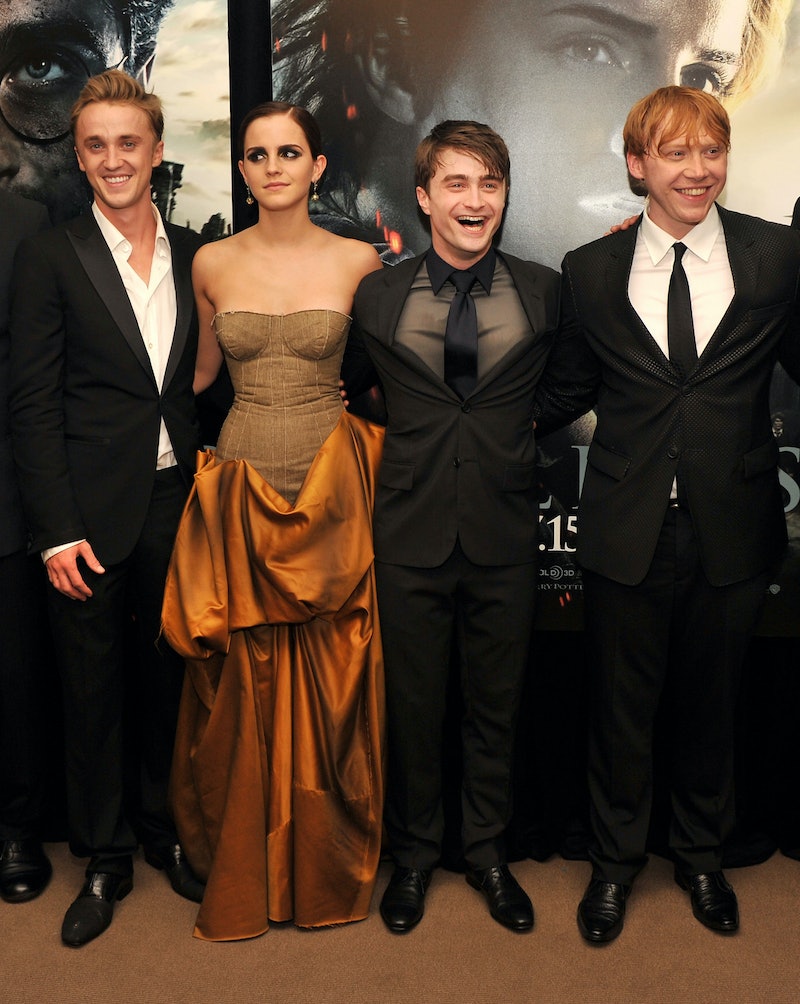 Christmas has come early for a few beloved students of Hogwarts. Harry Potter stars Emma Watson and Tom Felton reunited with a few of their former co-stars for a recent holiday gathering, and the photo evidence of the magical event is so adorable it's downright riddikulus. Aside from Watson and Felton, who played Hermione Granger and Draco Malfoy, respectively, attendees included Evanna Lynch (Luna Lovegood), Bonnie Wright (Ginny Weasley), and Matt Lewis (Neville Longbottom). Typically, you wouldn't expect to see a Slytherin hanging out with a bunch of Gryfindors and a Ravenclaw, but that's the yuletide season for you — bringing everyone together regardless of their Hogwarts house.

"Seasons greetings from my school mates. @mattdavelewis & I mid debate x #gryfindorVSslytherin," Felton captioned several group photos on his Instagram, which show the gang having a blast together as if no time has passed. Watson also made a point of posting one of the same images to her own Instagram account alongside the caption: "Merry Christmas from us ☺️."

It's worth noting that Watson and Felton are standing right next to each other in the images with Felton's arm securely around Watson, adding further fuel to the ongoing rumor that the two of them are dating. Could this holiday photo be a subtle hint at their reported relationship?

Speculation about Felton and Watson's friendship has run rampant over the last few years. The duo themselves have denied the validity of the romance rumors, with Watson notably referring to herself as "self-partnered" in British Vogue this year. However, their former Harry Potter co-star Rupert Grint spoke on the matter during an interview with Entertainment Tonight back in November.

Grint hinted that they actually could be a real-life couple, stating that "there was always something," between the two actors when they were on set, adding that "there was a little bit of a spark" in regards to their chemistry. However, he also felt that it's just as possible that nothing came from it. "We were kids," he explained. "It was like any kind of playground romance."

This isn't the only instance where Watson and Felton have been shown hanging out together. Back in August, Felton posted a pic of himself on the beach and gave photo credit to Watson, hinting that the two of them were on some sort of vacation together. Then there's the photo he posted that same day of him teaching her guitar.

But even if Watson and Felton are together, they, of course, have every right to keep their relationship private. Though as the holiday photo clearly indicates, they certainly seem to enjoy one another's company, regardless of whether they're dating or not.