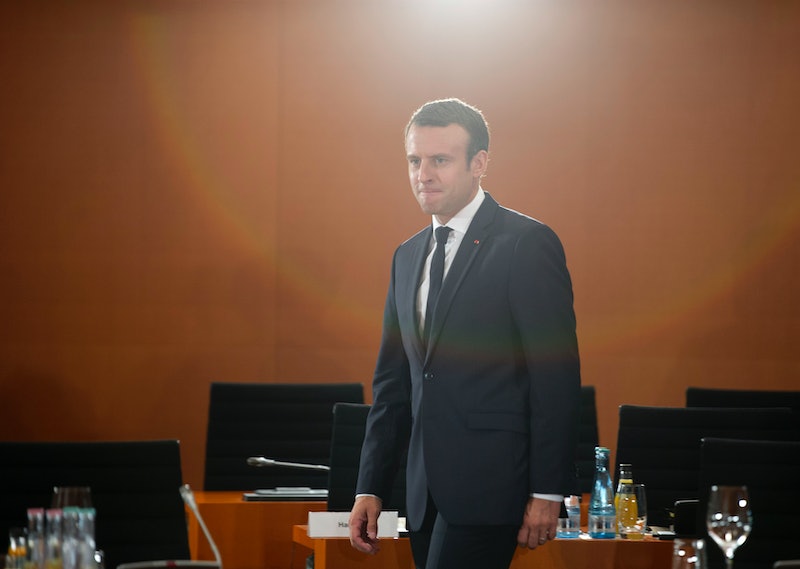 While attending the G20 Summit in Hamburg over the weekend, Macron tweeted Saturday that a new climate summit will take place on December 12. As translated from French, Macron's tweet read, "On December 12, 2017, two years after the adoption of the Paris Agreement, France will hold a new summit on climate mobilization." He also tweeted a video of himself addressing the G20 Summit with the statement, "There's no going back on the Paris agreement." In yet another tweet, he used the hashtag, "Make Our Planet Great Again."

Macron's message was clear, but he wasn't the only world leader to strike back at Trump's decision to withdraw from the Paris agreement. In closing the G20 Summit, German Chancellor Angela Merkel, who hosted the event in her home country, condemned the U.S. withdrawal. In her remarks, Merkel called Trump's decision unfortunate.

The weekend's summit did not do much in the way of convincing Trump to change his mind. The world leaders in attendance affirmed their support for the landmark climate agreement adopted in 2015 by signing a document that encourages implementation of the accord. Out of the 20 leaders in attendance, the U.S. president was the only one not to make such a commitment.

Perhaps the December summit in Paris will bring another opportunity for Trump and his foreign counterparts to come together. While not many details were released about the summit, Macron reportedly said Saturday that the climate summit would seek to mobilize public and private funding for the projects outlined by the Paris climate agreement, according to Reuters.

The funding that Macron seeks to mobilize in December may actually represent part of Trump's motivation for withdrawing from the climate agreement in the first place. Announcing his decision in June, the president accused the accord of placing "draconian financial and economic burdens" on the U.S.

According to NPR, the climate accord mandates that the developed world will provide $100 billion a year in funding to support alternative energy sources in the developing world. The accord challenges all countries to work together to limit the increase in global temperatures to below 2 degrees Celsius (3.6 degrees Fahrenheit). As much of the international community remains committed to financing that goal, Trump's decision to do otherwise may continue to draw criticism as Macron's climate summit comes into view.