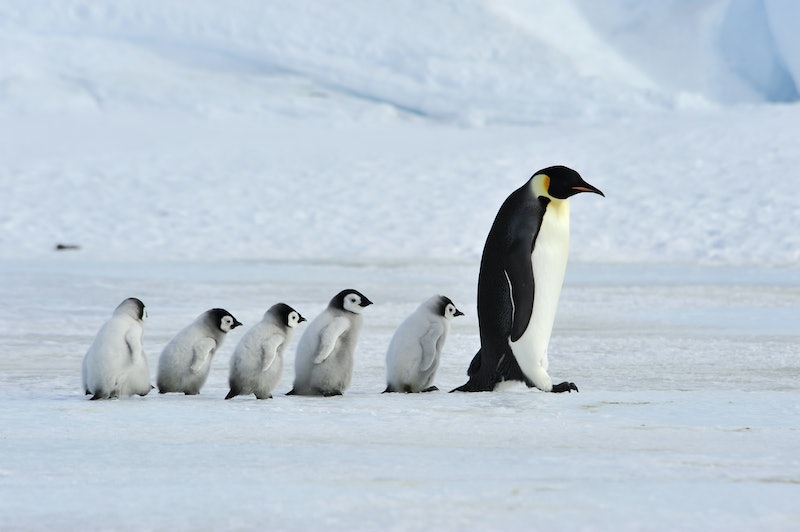 The second episode of ground-breaking documentary Our Planet, titled Frozen Worlds, showed how global warming had a detrimental impact on the homes of polar bears, penguins, seals, and walruses, often with fatal results. As national hero David Attenborough narrated: "the stability of nature can no longer be taken for granted," and we watched in horror as we saw this to be true. And recent news shows the situation may be worsening, as huge numbers of emperor penguins have disappeared off the coast of Antartica, on Halley Bay.

The British Antarctic Survey (BAS) have reported a "catastrophic breeding failure" for emperor penguins who have been unable to raise their young. Emperor penguins, as the name suggests, are the largest breed of penguins and, according to National Geographic, they live 15 to 20 years in the wild, where they spend long winters on the ice braving temperatures of -76C.

According to the BAS, emperor penguins need stable sea-ice on which to rear their chicks. For the past 60 years, the sea-ice at Halley Bay has been stable, allowing the colony to thrive. However, the sea-ice was destroyed in 2016, the BAS writes, due to "abnormally stormy weather." This has resulted in a breeding failure for the past three years.

Through satellite imagery, BAS are able to see the emperor penguin guano (excrement), which enables them to determine colony sizes. Since 2016, they have seen a dramatic decrese in guano in Halley Bay.

BAS remote sensing specialist Dr Fretwell told the BBC: "The sea-ice that's formed since 2016 hasn't been as strong. Storm events that occur in October and November will now blow it out early. So there's been some sort of regime change. Sea-ice that was previously stable and reliable is now just untenable."

In the first episode of Our Planet, Attenborough states: "All across our planet, crucial connections are being disrupted, the stability that we and all life relies upon is being lost. What we do in the next 20 years will determine the future for all life on Earth." A poignantly sad reality.

Although BAS penguin expert Dr Phil Trathan says it's "impossible to say" whether the sea-ice issue at Halley Bay was definitely determined by climate change, he does state that "published models suggest that emperor penguins numbers are set to fall dramatically, losing 50-70 percent of their numbers before the end of this century as sea-ice conditions change as a result of climate change."