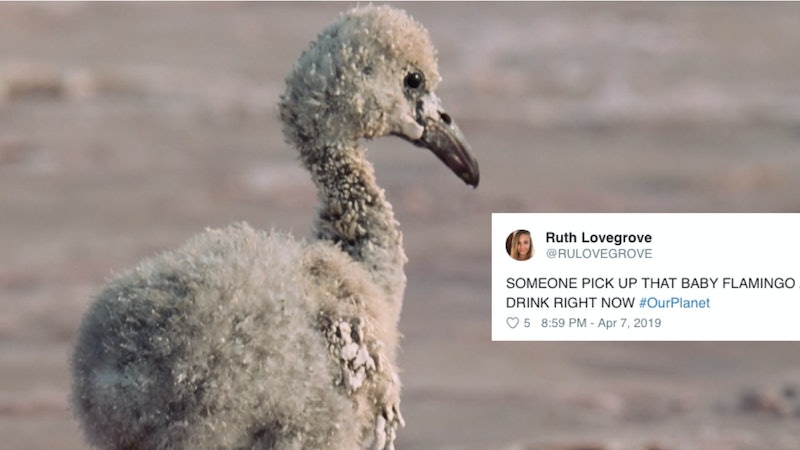 Netflix's latest docu-series Our Planet captures a beautiful yet heartbreaking depiction of the world's wildlife, and how climate change is having a detrimental impact on their habitats across the globe. Over the course of an hour, it's hard not to end up forming an emotional connection with the animals that are being followed on-screen and the hardships they face — which was certainly the case in a sequence during the first episode of the series. So if you're wondering what happened to the baby flamingo on Our Planet, you better get some tissues because it's not a happy ending.

In the opening episode of the eight-part series, viewers were shown the diverse nature that our planet has to offer. From the plains of the Serengeti to the depths of the ocean, the docu-series demonstrates how important these habits are to the animals that call them their home. One such place is a vast salt pan in Africa, where flocks of lesser flamingos feed on the once dormant algae and breed once rains have deluged the area. It's a spectacular sight to see, especially those adorable little fluffballs hatch from their eggs 30 days later.

However, despite the rain that led the flamingos to the salt pan, it is a rare occurrence. After the water dries up, the flock travel around fifty kilometres to find a new source for the newly hatched chicks. As David Attenborough explains through his narration, as the chicks can't fly they have to follow the adults along the dried pan and sadly some find it hard to keep up. This was the case for one little guy who ended up having salt deposits solidify around its feet and legs, making it even harder for it to keep up with the rest of the flock.

I've reached out to Netflix to see whether or not they know anything regarding the chick's eventual fate, but from the shot of it tripping and falling from the weight of the deposits and Attenborough describing how most of the chicks reach the fresh water, it's not hard to infer that this lone chick didn't make it. It was a short but emotional moment, and many viewers took to Twitter to display their anguish.

As sad as that scene was, it's part of nature's course. As much as everyone wants someone to intervene in moment's like this, you have to accept that this will happen the next time a flock of lesser flamingos nest and the time after that, no matter how emotionally tormenting it is to watch a baby animal struggle like that. Mother Nature is a wonderful but formidable after all.

However, earlier this year humans did actually intervene with a flock of lesser flamingo chicks due to a drought that had struck their breeding ground at a South African dam. The chicks were moved to a bird sanctuary in Cape Town, where they were kept hydrated and fed. "There are still several thousand birds breeding in the dam in areas that still have water," Katta Ludynia told Reuters in January. Ludynia is the research manager at the Southern African Foundation for the Conservation of Coastal Birds (SANCCOB).

"The damn in Kimberley is so important because it is manageable, so we can secure the water level there and that might be the only site the flamingoes can breed in Southern Africa, if the drought continues in other areas," she added.

Despite the chick shown in Our Planet not having the best of luck, at least you can be safe in the knowledge the chicks at this breeding site were saved.