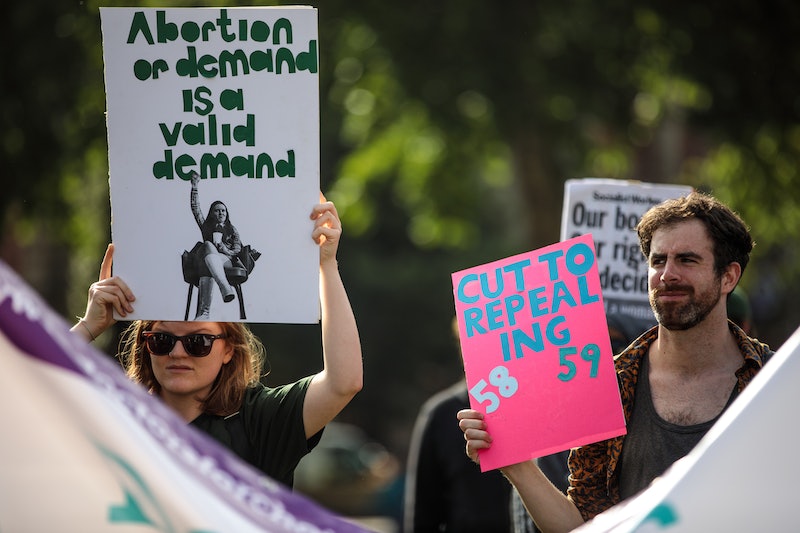 A new plan to legalize the at-home use of an early medical abortion drug in England aims to increase not only women's reproductive choices but also their access to safe and dignified care. Under England's new abortion pill plan, people will be able to take the second abortion pill at home. The plan will make England the next country to legalize the at-home use of misoprostol, following Scotland and Wales earlier this year.

"Today's news shows the power of women's voices," Claudia Craig, a woman who launched a campaign advocating for home use of the abortion pill earlier this year, said in a statement released Saturday. "It shows what we can achieve when we come together to fight for change... women's reproductive rights are human rights and should never be up for debate."

Women and people in England who seek to end a pregnancy within the first 10 weeks must currently take both mifepristone and misoprostol — two pills used in conjunction to facilitate a medication abortion — at a clinic 24 to 48 hours apart from each other, according to the Guardian. Under the new plan, which is expected to go into effect before the year's end, people will still take mifepristone at a clinic. They will then be given the choice of taking misoprostol, the second pill, in the comfort of their own home or at the clinic.

Lesley Regan, the president of the U.K.'s Royal College of Obstetricians and Gynaecologists, also cheered the government's plan to legalize home use of the abortion pill, calling it "a major step forward for women's healthcare" in a statement released Saturday.

"This simple and practical measure will provide women with significantly more choice and is the most compassionate care we can give them," Regan said. "It will allow women to avoid distress and embarrassment of bleeding and pain during their journey home from an unnecessary second visit to a clinic or hospital. It will also improve access to safe and regulated abortion care and take pressure off NHS services."

In legalizing the at-home use of misoprostol, England aims to not only increase available reproductive health options but to also reduce a person's risk of miscarrying on their way home from the clinic, the BBC reported.

In advocating for the at-home use of the abortion pill, Craig began speaking out about her experience in beginning her medication-induced miscarriage while in a taxi traveling home from the clinic. "When you are having an early medical abortion like I was, you take two pills roughly two days apart, and it is the second pill that triggers a miscarriage," Craig wrote in an op-ed for The Guardian earlier this month. "You had to take the pill in the hospital or clinic in front of a nurse, place it under your tongue, wait for it to dissolve and travel home. The abortion can start within 30 minutes of taking the pill. Do you live within 30 minutes of a hospital?"

Although Craig lived about 15 minutes away from where she was required to take the second pill, she began feeling the symptoms of misoprostol before she got home. "I was extremely nauseous, the cramping was almost unbearable and I thought I was going to pass out," she wrote. "All I could focus on was getting home and being near a toilet. I arrived home just in time to collapse on the bathroom floor."

Craig said Saturday that sharing her experience with the public was "one of the hardest and scariest things" she's ever done. "But seeing today's result and feeling like it's actually made a change has made it all worthwhile," she said in a statement. "I'm so relieved that our voices have finally been heard and that experiences like mine will not be a thing of the past for women in England."

More like this
24 History-Making Black Women You Probably Didn't Learn About In School
By Ayana Lage and JR Thorpe
25 Inspiring Quotes From Black Women To Celebrate Black History Month
By Kyli Rodriguez-Cayro and JR Thorpe
Twitter Is Identifying With Sally Field & Jane Fonda’s Friendship In New Viral Video
By Jake Viswanath
Here’s Where The NHS Nurses’ Strike Currently Stands
By Sophie McEvoy
Get Even More From Bustle — Sign Up For The Newsletter
From hair trends to relationship advice, our daily newsletter has everything you need to sound like a person who’s on TikTok, even if you aren’t.