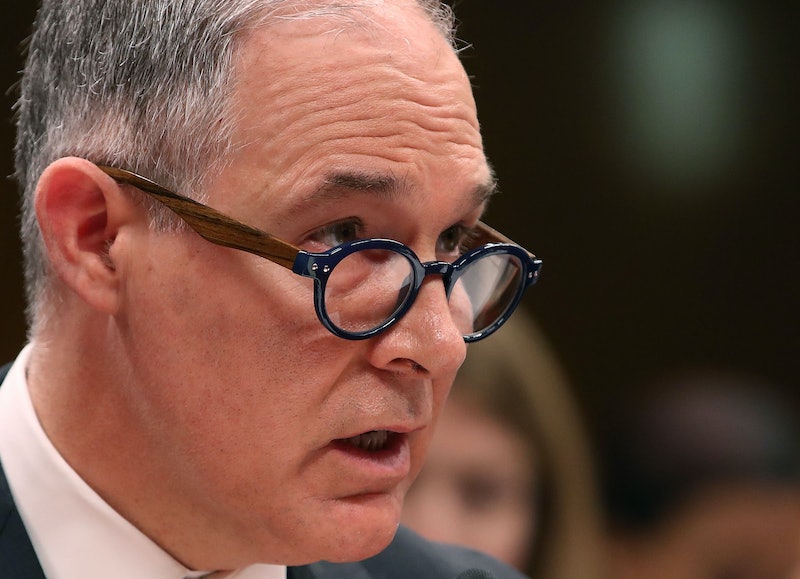 How much money would you spend on high-class pens? Well, for the administrator of the Environmental Protection Agency, the answer is apparently pretty sizable ― Scott Pruitt's EPA spent $1560 on 12 fountain pens at a pricey Washington, D.C. jeweler, just the latest revelation in a long list of controversial expenses for the agency's chief.

Now, before you assume that's a ridiculous amount of money to spend on pens, you should know that he actually got a dozen of them for that price, which means each one averaged out to about $130. Which is... still a really huge amount of money to drop on pens. For a sense of perspective, although housing costs vary wildly based on which part of the country you live in, that's more than the average cost of a month's rent.

According to The Washington Post, the pens were purchased by an EPA staffer at the Tiny Jewel Box, a high-end jewelry shop in the nation's capital, and the purchase was signed off on by a top Pruitt aide. The pens were silver, and came complete with an EPA logo, and Pruitt's signature, on each. The total sum of the purchase was $3,230, although that number reportedly included additional money for personalized journals, which also must have been pretty fancy.

This information was revealed thanks to a public records request from the Sierra Club, an environmentalist advocacy organization that's long been critical of Pruitt. First nominated to run the EPA during the presidential transition, Pruitt was a heavily scrutinized choice from the very beginning, owing to the fact that as attorney general of Oklahoma he was involved in multiple lawsuits against the agency, aimed at demolishing federal environmental standards.

Since taking over the job, however, he's become embroiled in a constantly escalating series of scandals regarding his use of taxpayer funds. He's not the only Trump administration cabinet secretary this has been true of ― former Health and Human Services secretary Tom Price ultimately resigned in 2017 over his use of private, chartered flights, which cost taxpayers more than $1 million.

In Pruitt's case, the price tag to taxpayers has been even higher, thanks to his flying first-class while keeping a robust travel schedule, and to a variety of elaborate security measures, reportedly including a 20-man team tasked with protecting him. According to The Independent, this large security detail has accompanied Pruitt not just on public business, but during private travels too, with security working to protect him 24 hours a day.

The EPA has justified the additional and pricey security measures due to threats made against Pruitt; he reportedly faced 16 threats in fiscal year 2017, out of a total of 50 that were sent to the agency over that time. By way of comparison, in fiscal year 2016 44 threats were sent to the agency, according to BuzzFeed. It's worth noting, however, that not everybody agrees about what constitutes a threat, as a postcard to Pruitt shown in the tweet below demonstrates.

During his first four quarters as EPA administrator, according to CNBC, Pruitt's security costs topped $3.5 million, and all of that comes out of the pockets of the taxpayers. It remains to be seen whether he'll face any consequences for the unusually high expenses, and in the most recent case, his penchant for expensive pens.

To this point, the Trump administration cabinet has experienced a higher rate of turnover than any other presidential administration in the modern era, so it wouldn't exactly be unprecedented for Pruitt to be shown the door. Again, however, there hasn't yet been any public indication that his spending controversies will bring the same results that Price's did.