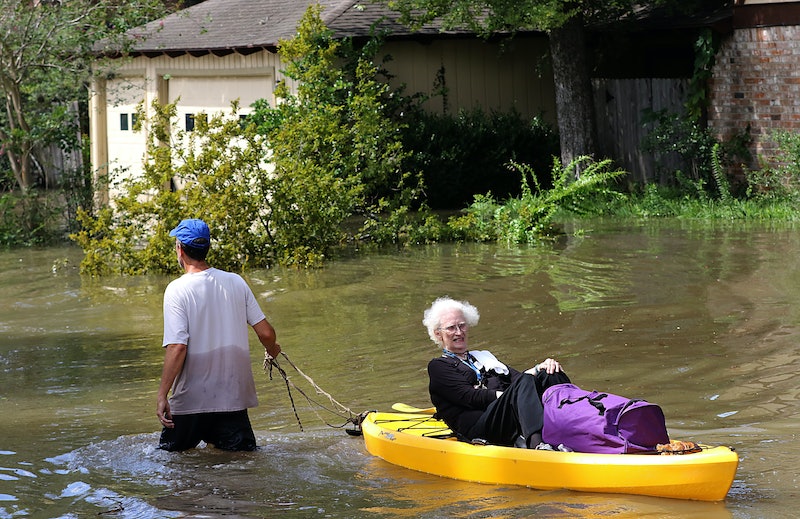 As catastrophic floodwater from Hurricane Harvey continues to drown Houston and the surrounding area, scientists predict human-caused climate change will only increase the likelihood of stronger hurricanes. Climate scientists also agree that global warming was one of the factors that intensified the rainfall from Harvey, a Category 4 hurricane (now tropical depression) that has claimed at least 30 lives so far. The Environmental Protection Agency expressed distaste for these observations, however. In response, the EPA criticized climate scientists for "attempts to politicize" Harvey and the destruction it caused.

EPA spokeswoman Liz Bowman told Reuters, "EPA is focused on the safety of those affected by Hurricane Harvey and providing emergency response support — not engaging in attempts to politicize an ongoing tragedy." Bowman is the public affairs officer for EPA chief and climate change denier Scott Pruitt, who refuses to link CO2 emissions to global warming, despite extensive research saying otherwise. This telling statement indicates that the EPA under Trump views evidence-backed climate change as a political issue, rather than conclusive science. In an interview with far-right commentary website Breitbart News, Pruitt slammed the "opportunistic media" for what he sees are misplaced attempts to explain why Hurricane Harvey resulted in record rainfall, storm surges, and severe flooding.

While the EPA has condemned scientists and the media for bringing up climate change rather than focusing solely on the people affected, it's important to note that global warming exacerbates environmental disasters and environmental disasters affect people — close to 190 million people worldwide every year. Narrowing down to Harvey alone, the Federal Emergency Management Agency (FEMA) anticipates 30,000 people displaced from Harvey will be placed in temporary shelters. Homeowners are projected to foot a $24 billion bill out of pocket. Close to 50,000 people's homes have been damaged or destroyed in Texas as more bodies are still being discovered. Texas is especially abysmal when it comes to preparation for hurricane season: unchecked development in Houston and poorly designed infrastructure make for inept flood protection. New Orleans, which suffers from an antiquated drainage system, has yet to be fully rebuilt following Hurricane Katrina.

Under Pruitt's direction, it's doubtful the EPA will heed scientists' advice to prepare for the consequences of climate change. The Trump appointee said on a Texas radio show that "science should not be something that's just thrown about to try and dictate policy in Washington D.C." But whether he likes it or not, hurricanes will happen, people will be affected, and the United States will have to find a way to better mitigate the damage from natural disasters.