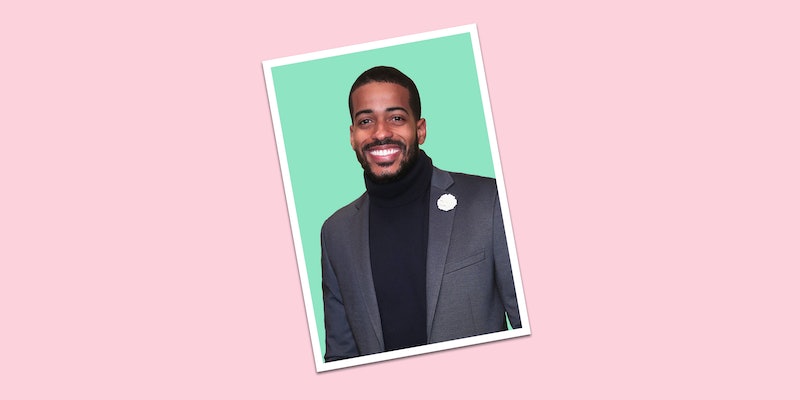 Bustle takes the Bachelor franchise pretty seriously. That’s why we created the Bachelor Nation Class of 2018 — like high school superlatives, but Bachelor edition. Check out what Eric from Rachel's Bachelorette season had to say about being awarded "Most Genuinely Inspirational."

Straight up: Eric Bigger should have had his own season of The Bachelor following Rachel Lindsay’s season of The Bachelorette. Not only is Eric more interesting and dynamic than Arie, who was ultimately chosen as the next season's Bachelor, but his emotional honesty and optimism would have made for a genuinely heartwarming season. Though he never got the chance to be the franchise's leading man, Bustle has an award just for him in the Bachelor Nation Class of 2018: "Most Genuinely Inspirational." Eric may not have won Rachel’s heart or won any hearts at all on The Bachelor Winter Games, but Bachelor Nation loves him, and that’s all that matters, right? (And plus, we're pretty excited to see him on Paradise this season).

"I want to say thank you for acknowledging me as 'Genuinely Inspirational.' It’s amazing because my intention every day is to provide impact and inspire/motivate the masses. I guess being genuine and inspirational has its way. Thank you again! #Itsmiracleseason"

While on The Bachelorette, Eric largely avoided the drama, choosing to spend his time focusing on Rachel and his connection with her instead of getting caught up in tension in the house. He spoke early in the season about how he grew up in a rough neighborhood in Baltimore — he at one point called his upbringing “hostile” — and his family didn’t really have money. He told Rachel his parents separated when he was young, so he lacked the proper role models to demonstrate what a solid adult relationship looks like.

Eric’s ability to open himself up on TV like this is amazing, not because of who he is or where he comes from, but because being emotionally vulnerable and open is one of the scariest things a person can do. Eric didn’t get Rachel in the end, but he’s taking the emotional lessons he learned from his season and passing them on to the public — his Instagram is full of affirmations and ways to make everyday life seem, well, less scary. He’s a personal trainer by day and a sort of guru on the side, meaning that Eric is strengthening the bodies and minds of all who will listen — and that makes him the Most Genuinely Inspirational person in his Bachelor Nation class.