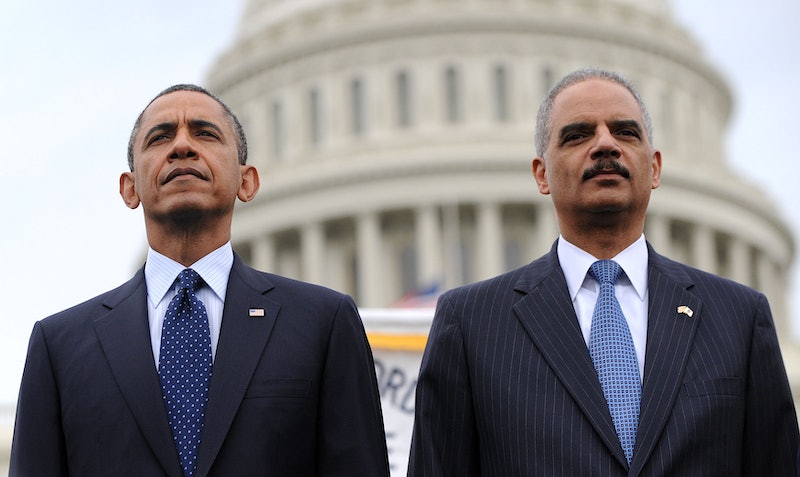 We haven't even hit the 2018 midterms yet, so the 2020 presidential election might seem like it's eons away. But even so, it's already time for the potential candidates to start weighing their decisions. There are signs that the race has already started, as former Attorney General Eric Holder said he's considering running for president.

In an interview on Stephen Colbert's The Late Show, the high-ranking former Obama official confirmed rumors that he was seriously thinking about running for president in 2020.

"Are you seriously considering throwing your hat into the ring for 2020?" Colbert asked Holder.

"Yeah, I'm thinking about it," Holder said. "What I’ve said is that I’d make a determination sometime early next year."

He also made it clear, though, that he's engaged in something else right now. Specifically, he's working on the midterms. "My focus, really now, is on 2018, the midterms and trying to make sure that Democrats take back the Senate, take back the House and that we do well, importantly, at the state level," Holder explained.

Although he didn't mention it in his interview with Colbert, Holder has been working on an initiative called the National Democratic Redistricting Committee.

Holder is the chairman, but he's not the only one from the Obama administration working on that project. In fact, former President Barack Obama himself has teamed up with Holder to promote the NDRC's work, for example by filming in a video discussing the importance of redistricting.

"In America, politicians shouldn't pick their voters. Voters are supposed to pick their politicians," Obama said in the video, after explaining how gerrymandering works and why it's so damaging to American democracy. In essence, he explained, gerrymandering is the process through which the party in power redraws the districts under their control so that the opposing party's voters are all concentrated into a smaller number of districts. This allows them to retain their position in the majority even if the opposing party receives more votes — and according to Politico, Republicans have benefited heavily from gerrymandered districts in the past several elections.

In his interview with Colbert, Holder emphasized that he was working to get Democrats elected not only at the federal level, but also at the state level. This, he said, was so that they could take a bigger role in the redistricting process after the 2020 census.

"I want to make sure that we elect as many people at the governor level, at the state legislative level, so that when 2021 comes, we have a fair redistricting process," Holder told Colbert.

According to the NDRC's website, the initiative is targeting numerous states by "advancing legal action, mobilizing grassroots energy, supporting reforms, and winning targeted elections," with Holder at the head of all of that — and Obama's support behind him. Even just the drive to get out the vote, as Holder discussed with Colbert, is a massive task in the midterms — so Holder definitely isn't just creating unnecessary suspense when he says that he hasn't fully made his decision about running for president.

If Holder does run for president, there's no telling yet exactly which of Obama's policies he would embrace or attempt to redo. However, based on how closely they've worked together so far, it certainly seems as though Obama might be one of the people consulting Holder on whether or not a run is the right step.