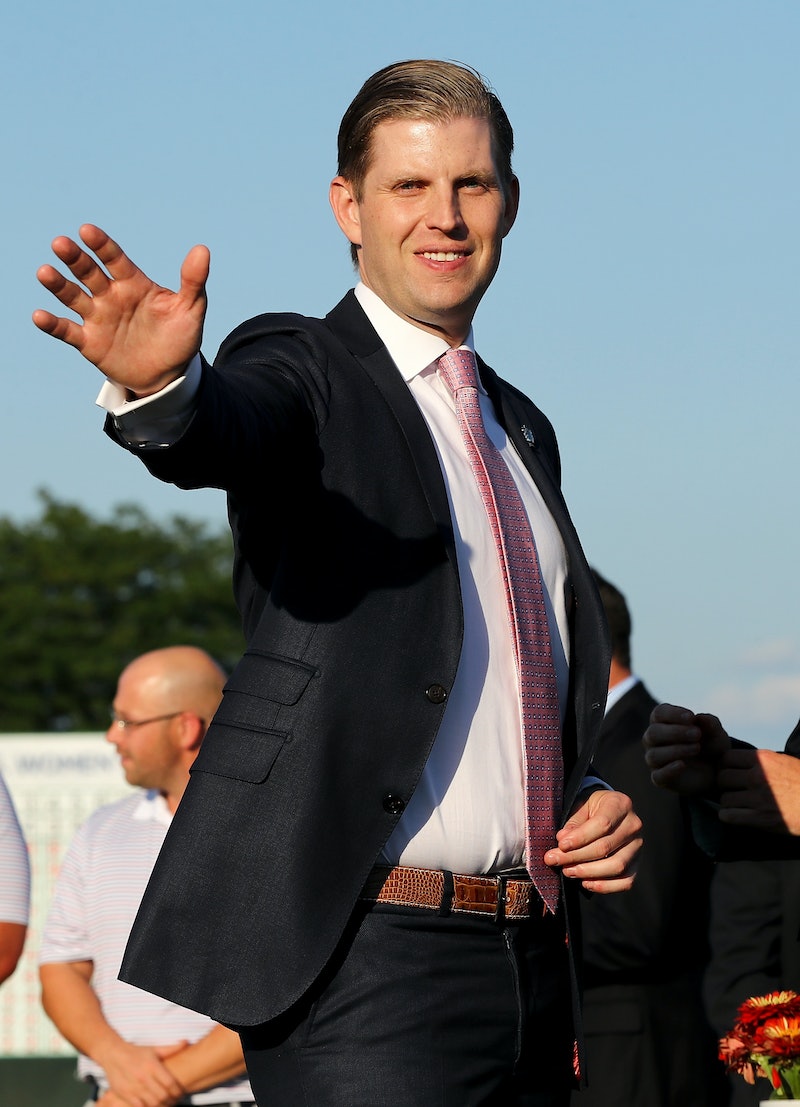 In defense of a racial slur his dad used in front of a bunch of Native American war heroes on Monday, Eric Trump cited Disney's "Pocahontas" movie on Twitter. He suggested that the company, which owns ABC News, profiting off Native Americans was "offensive," and got mercilessly trolled Tuesday on Twitter for it. President Trump's second-oldest son was trying to do damage control after his father mocked Sen. Elizabeth Warren during a ceremony honoring Navajo code-talkers at the White House.

After thanking the veterans for their contributions during World War II, Trump noted that Native Americans “were here long before any of us were here — although we have a representative in Congress who they say was here a long time ago. They call her Pocahontas.” It's a label Trump often uses to refer to the Massachusetts Democrat, who claims she has Cherokee and Delaware Indian heritage.

But never mind the fact that even the president of the Navajo Nation said that the remark was offensive — Eric Trump defended his dad's use of the term by tweeting that it can't be offensive, because Disney profited off making a movie about Pocahontas. The tweet appeared to be a response Johnathan Karl, ABC News' White House correspondent. Karl brought up Trump’s remark on Monday to White House press secretary Sarah Huckabee Sanders, asking, “Why did he feel the need to say something that is offensive to many people while honoring the Navajo code talkers, these genuine American heroes?”

The irony of President Trump using a slur against Native Americans during a ceremony meant to honor their war heroes, however, was apparently lost on his son, and Twitter was there for it.

Some replied to Eric Trump's tweet by defining the word "irony," while others tried to offer explanations for why Pocahontas is considered a slur.

Perhaps it's no surprise that Eric Trump's argument — that a movie about Pocahontas (who was an actual person) is as offensive as his father calling a sitting senator "Pocahontas" — has overwhelmingly been met with criticism.

As Warren herself put it, the timing (and setting) of the president's comment made it all the more offensive. "There he was, at a ceremony to honor Native Americans, men who have really put it all on the line to save American lives, to save lives of people, our allies, during World War II, really amazing people," Warren told CNN on Monday. "And President Trump couldn't even make it through a ceremony to honor these men without throwing in a racial slur."

Trump himself has said he is the "least racist person ever" — though that hasn't stopped him from calling other people (including Warren) racist. During his campaign for president, Trump repeatedly questioned the Congresswoman's Native American heritage claims. In June 2016, claimed to NBC News that she "made up her heritage, which I think is racist. I think she's a racist, actually, because what she did was very racist."

The picking and choosing of what's racist and what's offensive doesn't end with the President, of course. In attempting to explain the slur (and whether or not it was offensive), Sanders said that "most people" are offended by "Senator Warren lying about her heritage to advance her career.”

In addition being met with some spectacular dragging on Twitter, Eric's use of a Disney movie to defend a racist remark has many wondering if the First Son even knows that Pocahontas was real.