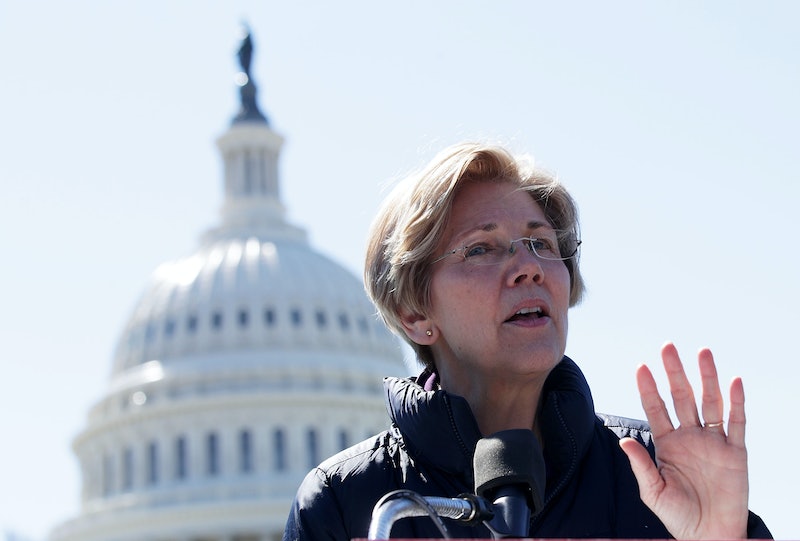 While honoring a group of Native Americans at an event Monday afternoon, President Trump called Elizabeth Warren "Pocahontas," a quip that was reportedly met with pure silence by everyone in the room.

Trump was speaking in the Oval Office to commemorate the service of a group of Navajo Code Talkers, who used a special code during World War II to transmit messages. According to the National Museum of the American Indian, the Navajo Code Talkers were recruited by the Marine Corps in the early 1940s to create a Navajo language code, developing new words for military terms in order to communicate battle messages in secret.

In the White House, Trump told the group, "You were here long before any of us were here. Although we have a representative in Congress who they say was here a long time ago. They call her Pocahontas."

Trump has been criticized for using "Pocahontas" as a slur against Sen. Warren before. Warren has claimed she has Cherokee and Delaware Indian heritage, but has been unable to prove it with verified documentation. So Trump came up with a nickname and began referring to her as "Pocahontas." He was swiftly rebuked by Native Americans, including Ruth Hopkins, a Dakota/Lakota Sioux and columnist at Indian Country Today, who said Trump was mocking the real Pocahontas and other Native American women.

And if his use of the joke in front of a room full of Native American veterans wasn't bad enough, many people on Twitter pointed out that Trump was actually standing in front of a portrait of President Andrew Jackson when he said it. Jackson, who was president from 1829 to 1837, pushed for the "Indian Removal Act" that forced thousands upon thousands of Native Americans from their homes, killing many in the process.

But you know what? I like you. Because you are special. You are special people. You are really incredible people — from the heart, from the absolute heart, we appreciate what you've done, how you've done it, the bravery that you've displayed, and the love that you have for your country.

Like the times Trump has called Warren the name in the past, many people online spoke out about their outrage, calling it disrespectful, disparaging, and disgusting.

"He Needs To Resign"

Obama "Did It Better"

When asked at a White House press briefing about Trump's comments, Press Secretary Sarah Huckabee Sanders deflected the question, stating "I think what most people find offensive is Sen. Warren lying about her heritage to advance her career."