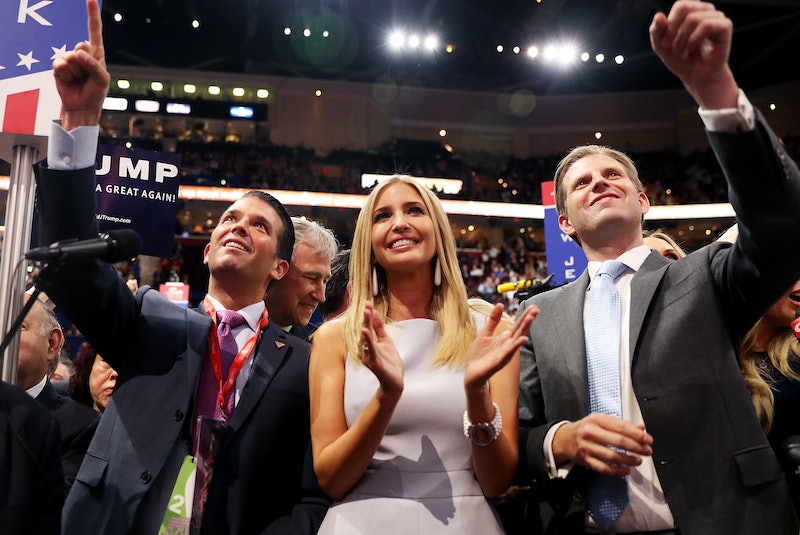 Just hours before President Trump was scheduled to deliver his State of the Union Address, his son appeared on Fox & Friends to discuss a myriad of current events. During his appearance, Eric Trump said Ivanka Trump has helped women more than "probably anybody in Washington D.C.," according to video clips of Tuesday's show.

He was referencing a piece of performance art currently on display at Flashpoint Gallery in Washington, D.C. The installation, dubbed "Ivanka Vacuuming," purports to include a model who looks like the president's eldest daughter. During the performance, she stands on a pink carpet, vacuuming up crumbs that spectators are allowed to toss on the floor before her.

Trump was visibly frustrated when discussing the piece on television on Tuesday, accusing Democrats of "hypocrisy." "These leftists called up a modeling agency, saying, 'You know what, I want to get a nice woman to come stand on a carpet, with a vacuum of all things, so that our people can throw food and crumbs to mimic a powerful woman who has done more for women than probably anybody in Washington, D.C.," he said.

But the piece's creator, Jennifer Rubell, has described the piece as a bit more nuanced. In a press release, she explained that the faux Ivanka is intended to elicit multiple reactions.

“Here is what’s complicated: we enjoy throwing the crumbs for Ivanka to vacuum. That is the icky truth at the center of the work. It’s funny, it’s pleasurable, it makes us feel powerful, and we want to do it more,” Rubell said. “We like having the power to elicit a specific and certain response. Also, we know she’ll keep vacuuming whether we do it or not, so it’s not really our fault, right?”

For her part, Ivanka responded to the art installation on Tuesday, as well. In a tweet, she suggested that the piece was not productive in the way of promoting the advancement of women.

"Women can choose to knock each other down or build each other up," she wrote. "I choose the latter."

It was not entirely clear what Trump meant when he alluded the work that he believes his sister has done to advance the status of women in the United States. While she is consistently reported on in her capacities as both a member of the first family and a presidential adviser, she has largely stayed out of the spotlight since November, when multiple outlets reported that she had used her personal email to communicate about government business. The White House confirmed that she had used her private email, but said it wasn't to discuss any sensitive government information.

“While transitioning into government, after she was given an official account but until the White House provided her the same guidance they had given others who started before she did, Ms. Trump sometimes used her personal account, almost always for logistics and scheduling concerning her family,” a spokesperson for Ivanka's lawyer and ethics council said, according to The Washington Post.

It's true that much of Ivanka's brand — both personally and professionally — hinges on the idea of the working women. (Her most recent memoir, aptly, was entitled Women Who Work.) But while she has talked at length about advocating for gender pay equality and paid family leave, there has been little tangible action in that regard, since she joined the White House in an official capacity. She did successfully help push through more grant funding for STEM programs in schools, according to CNN, which could potentially help more young girls learn about those specific fields, but the money was not purposefully allocated to help women.

What her plans are moving forward, with regard to promoting gender equality, is not currently clear.