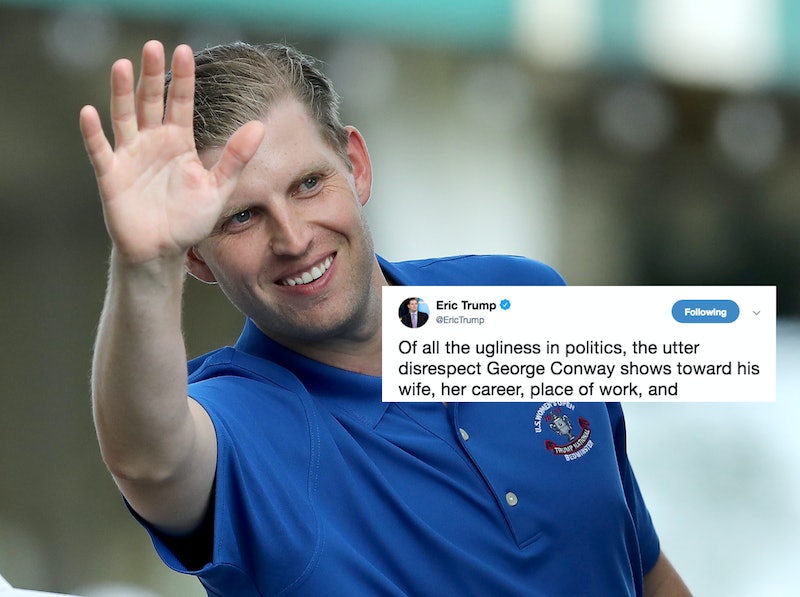 The husband of one of Donald Trump's longterm senior staffers has become well-known for taking frequent jabs at the president on Twitter. Following another widely-publicized tweet on Monday, Eric Trump slammed George Conway for criticizing Kellyanne's "place of work."

Most recently, Conway implied he believes that Trump allegedly tampered with a witness and obstructed justice. Conway's suggestion relates to a Trump tweet in which the president praised Roger Stone, a Trump associate and possible special counsel witness, for saying that he would never testify against POTUS. Commenting on the president's tweet commending Stone, Conway wrote, "File under '18 U.S.C. §§ 1503, 1512.'" Conway's comment refers to United States Code (U.S.C.) statutes for obstruction of justice and witness tampering, as The Hill reported.

Trump is not facing any criminal charges and has not responded publicly to Conway's tweet on the matter. Bustle reached out to the White House for comment.

Conway's tweet appears to have struck a nerve with Trump's son, though, who lambasted Conway in a tweet of his own. As Eric wrote:

Of all the ugliness in politics, the utter disrespect George Conway shows toward his wife, her career, place of work, and everything she has fought SO hard to achieve, might top them all. @KellyannePolls is great person and frankly his actions are horrible.

Conway has gained quite the social media following with his anti-Trump tweets and retweets, with his current follower count at around 180,000. As the Washington Post reported, Conway's account seemingly went viral after members of the public began taking note of the fact that the husband of one of Trump's most loyal advisors was openly criticizing the president on social media.

Conway and his wife have both discussed his tweets during media interviews. During a lengthy interview with the Washington Post in August 2018, Kellyanne told the paper that she thinks that President Trump finds her husband's tweets "impolite." She also had harsher words of her own regarding Conway's criticisms of the president, saying, "I think it's disrespectful ... I think it disrespects his wife."

For his part, Conway characterized his tweets as an outlet for expression during the same Washington Post interview. "It's an outlet, that keeps it [the Trump administration] a small part of my life," he said. "It's a quick easy way to express myself ... I think I'm actually holding back a little ... I think the reason why is obvious."

While Conway may perceive himself as holding back, lately he has been increasingly vocal in his condemnation of the administration for which his wife works — and not just on Twitter. Indeed, during an interview on Yahoo! News' "Skullduggery" podcast, Conway did not mince words when it came to describing why he turned down a job offer at the Justice Department in the early days of the Trump administration.

I’m filling out the financial forms and it’s like ... man, I’m thinking. I’m watching this thing, and it’s like the administration is like a sh*tshow in a dumpster fire. And I’m like, ‘I don’t want to do that. I don’t know.'

In November, Conway and 13 other individuals formed an advocacy group and support network called "Checks and Balances." The group consists of conservative and libertarian attorneys who do not support the Trump administration, CNN reported.

Overall, as Conway appears to become increasingly critical of Trump, it seems like some who are close to the president, like his son, Eric, are pushing back. It remains to be seen whether Eric — or any other members of the Trump family — will continue to call out Conway for his comments in the future.