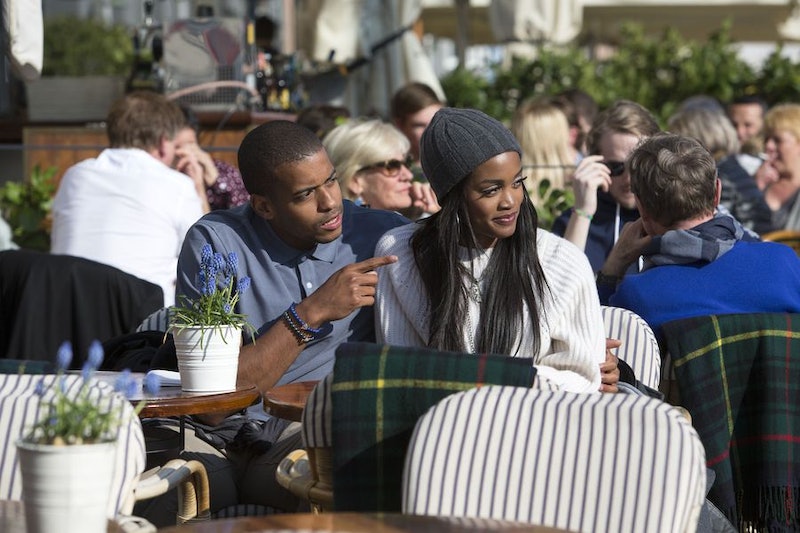 The Bachelorette is heading into its final stretch: The hometown visits. Of course, there will still be more decisions for Rachel Lindsay to make ahead, but meeting the family is a huge milestone in any relationship or season of Bachelorette. When Rachel goes home to meet the families and friends of her top four men, Eric and Dean's hometown visits will be a little more complicated than usual, and The Bachelorette fans need to reserve empathy for Eric's family, even though they're not the typical type profiled on this show. Both men opened up about their complicated personal lives. Dean claimed that his father wasn't supportive after the death of his mother, and Eric grew up with a family he claimed suffered from drug abuse and poverty. Frankly, The Bachelorette and its viewers have never had to deal with a family like that before, and the show's fans have only met one black family at all before — Rachel's.

Already, the trailer for the hometowns makes Dean's father look like a bit of a lovable eccentric. That's not to diminish the very real issues that Dean and his father may have, just that a white guy with a giant beard and a house filled with patterned rugs comes across differently on television than a poor black family that's been affected by the War on Drugs, as Eric tells it. Hopefully The Bachelorette doesn't ignore the realities of Eric's tough upbringing.

It was interesting to hear what types of conversations Rachel had with the guys about meeting their families. Bryan suggested that if Rachel can't impress his mom, that their relationship could end abruptly. Peter is the only one who is asked whether or not he's brought home a black woman before (he never has). Dean and Eric both shared their troubled pasts, but Dean's was framed largely around embarrassment that he's not going to have the same nuclear family as a lot of the other guys vying for Rachel's heart.

Eric didn't really take things in that direction. Instead, he almost warned Rachel: Meeting his family won't be anything like meeting most of these other families. "How I grew up wasn't easy... It was easy to sell a drug or commit a crime," Eric claimed. "I have friends in the projects... Mom, Dad, never seen them together in my life. I always had to figure out life on my own. What I learned is that I'm so good at helping people because I didn't get any help growing up."

Throughout the season, Rachel's biggest criticism of Eric is that he's been unable to really connect with her. This conversation about his family was a step forward in that direction, and may have been the reason why he received a rose. But The Bachelorette and its viewers needs to remember to be as open-minded as Rachel, and make sure that Eric's family is portrayed as sensitively as Dean's — or any of the other men on the show.