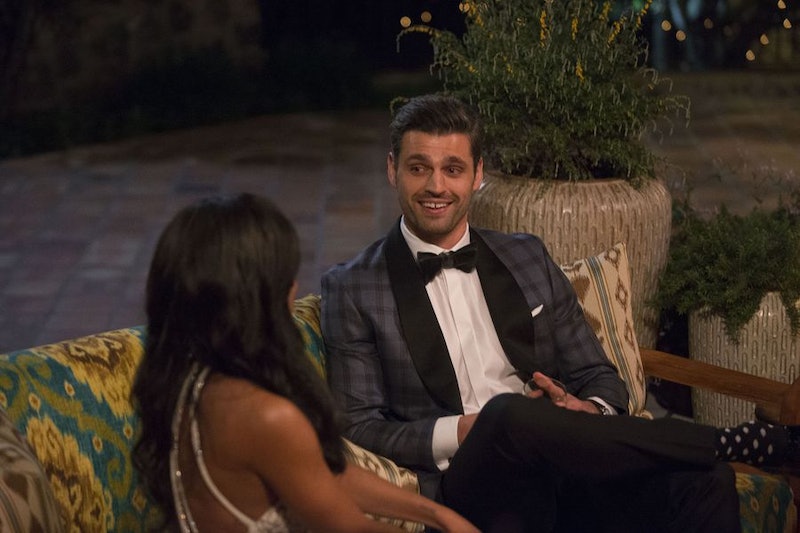 The closer it gets to The Bachelorette finale, the more real things are getting for Rachel Lindsay and her contestants, especially one in particular. On Monday night's episode, Peter seemed like he might be backing out of the competition under all that pressure, and since he's been a frontrunner all along, it's easy to see why that could be devastating for her. So what did Peter do to Rachel on The Bachelorette? Her tears show she's clearly upset, but fortunately, their conversation led to a much happier ending than the promo for the episode showed.

When Rachel and Peter finally sat down to talk one-on-one, he let her know exactly what he was thinking, which was pretty important since she was about to decide whether or not she wanted to give him the rose that would assure him a hometown date. He laid it all out there: He didn't want to get to the point of proposing to her if he wasn't 100 percent ready to take that step with her, so he's planning to let her know if he's not feeling it before then. Not that he's already checked out, of course — he was basically just letting her know that he takes this process just as seriously as she does.

And although Rachel admitted that his honesty scared her, it was definitely for the best. After all, The Bachelorette is giving these people hardly any time to decide whether or not they want to spend the rest of their lives with each other, so honesty about these things is necessary.

In the end, Rachel and Peter were able to figure out that they were on the same page (for now, at least), and she handed over the rose — not like anyone was worried he wasn't going to get it. Hopefully Peter keeps those lines of communication open, and they keep having talks like the one they had during their date. This is setting such a good tone for their future, as scary as it was.