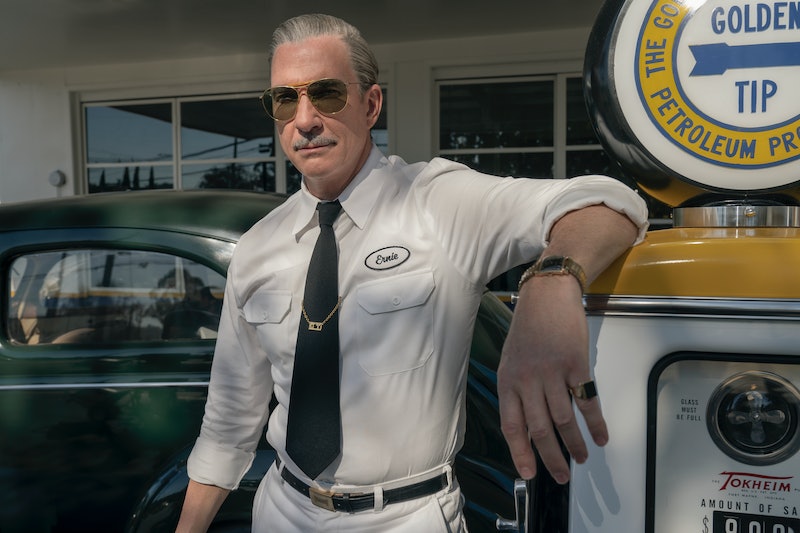 Saeed Adyani/Netflix
By Brad Witter
May 5, 2020

Ryan Murphy has referred to his 1940s-set Netflix series Hollywood as "faction," and Dylan McDermott's character, Ernie West, is an embodiment of this approach. Though much of his storyline is fictionalized, he's also partially based on real-life figures — and yes, there really was a brothel gas station that supposedly catered to the stars.

"I made up my character based on various muses: Scotty Bowers, Clark Gable, people I’d grown up with," McDermott explained in a recent interview with Town & Country. "You never know what goes into the concoction required to create a character. I stole a little bit of information from each of those people, so eventually I could get out of the way and the character could just take over."

Ernie is most similar to Bowers, who director Matt Tyrnauer described as "the premier male madame and sex worker of Hollywood's postwar period" in his 2017 documentary Scotty and the Secret History of Hollywood. (McDermott confirmed to Town & Country that he watched the film while preparing for his role).

Similar to how Ernie operated Hollywood's fictional Golden Tip gas station, Bowers ran an underground brothel of sorts out of Hollywood Boulevard's Richfield Oil station along with actor Walter Pidgeon, where they claimed to have secretly serviced some of the film industry's biggest names.

Although critics have questioned the validity of Bowers' claims over the years, McDermott believes the show would get the approval of Bowers, who died in October 2019. As he told O magazine: "I know if Scotty were alive, he would absolutely love this show. I think he would just marvel at it and get a good laugh."

More like this
'Doctor Who’s New Star Is Already Huge On TikTok
By Maxine Harrison
What’s New On Netflix: The Return Of 'Bling Empire' & A Rebel Wilson Comedy
By Arya Roshanian
'Heartstopper’s Joe Locke Is Manifesting A Jennifer Coolidge Cameo Next
By Nola Ojomu
Mike Myers Plays A Whopping 8 Different Characters In ‘The Pentaverate’
By Brad Witter
Get Even More From Bustle — Sign Up For The Newsletter