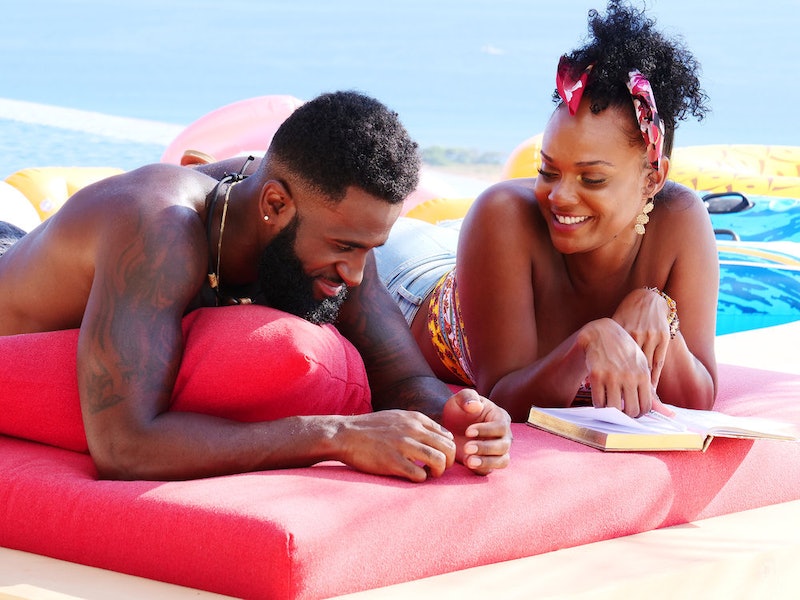 Spoilers ahead for Part 2 of the Temptation Island Season 2 finale. They didn't seem to be hiding their relationship while the show was still airing, and now that they they've officially left the island as a couple, it seems clearer than ever that Esonica and Kareem are still together. At the very least, there's more evidence that they are together than that they're not.

Not only do the two follow each other on Twitter and Instagram, they frequently interact on both platforms. Esonica likes nearly every one of Kareem's posts, and most recently left him an adoring comment on a photo from his interview with PeopleTV's Reality Check. "Look at you," she wrote. Kareem responded with a smiling emoji wearing sunglasses, and she replied again with three smiley faces.

It's not an outright confirmation that they're still a couple, but it definitely comes across that way. In fact, their connection is so undeniable that even the Temptation Island social media team is getting in on it. Earlier this month, the show's account tweeted a video of Kareem in which he asked The Maury Show for long-distance relationship advice. Esonica lives in Georgia, and Kareem in New York. The dots are basically connecting themselves.

Maury advised Kareem to store all of his energy "sexual and otherwise" and save it for the weekend. Kareem then quoted the response on Twitter and said, "Thanks for the relationship advice." At this point, it should come as no surprise that Esonica favorited the tweet.

On Dec. 5, Kareem also sat down with The Tylt for a video interview, and interviewer Keydra Manns did her best to pry a relationship status from him. "What is it like for ya'll now to be in love and like, as a couple?" Manns asked him, straight up. Kareem just burst into laughter. "What's that like?" she pressed. "You guys keep watching," he mustered out. "You guys are gonna love what happens."

Now that their ending has finally aired, Kareem should be able to finally admit that he and Esonica are together — and expect them to be even more open about their relationship.