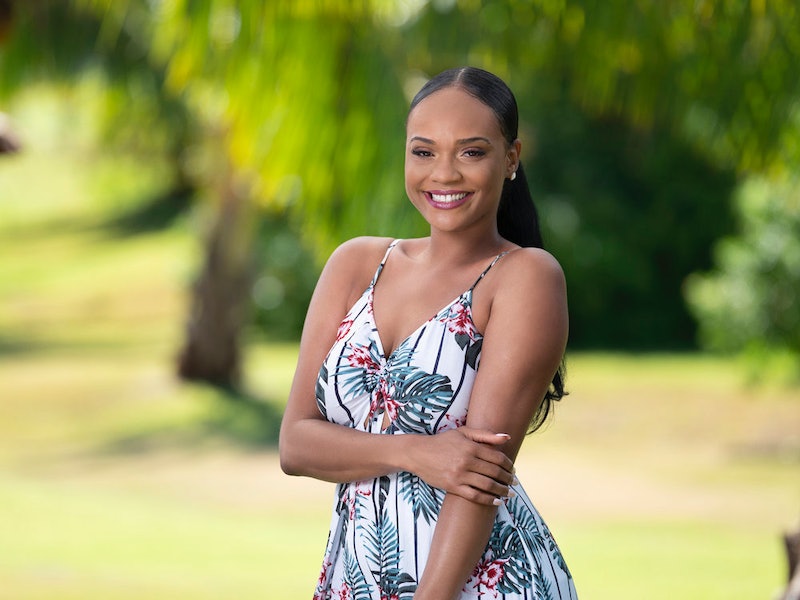 Temptation Island is back, and one of the couples putting their relationship to the test this season is Esonica Veira and her boyfriend Gavin Rocker. We learned a bit about the pair in the premiere episode, but Esonica's Instagram account reveals more about who she is when the cameras aren't rolling — and outside of her relationship.

We know from the show that she and Gavin have been together for about 18 months, but Esonica has some misgivings about whether or not Gavin is even capable of making a real commitment, given that he's cheated on her in the past. She agreed to come on the show so that he can figure out if he's ready to take the next step — but as her Instagram proves, she's a confident woman who's passionate about the things she believes in and knows what she wants. If Gavin can't rise to the same level, their stay on Temptation Island may end in heartache. Esonica doesn't seem like a woman who has time (or is willing) to wait around forever.

You'll have to keep watching to see where things end, but until then, here's what else you should know about Esonica as you watch her journey play out.

Esonica announced the launch of her own cosmetics brand, Forever Royal, back in April 2017. Her goal for the line, which began with five lipstick shades, was to "help promote self-esteem in young women," she wrote.

She's All About Supporting Women

In addition to fostering self-esteem in young girls via her makeup brand, Esonica shares that message often on her account. She's a big fan of inspirational sayings, many of them focused on uplifting women.

Esonica's Instagram feed is full of beautiful selfies, but many posts, like the one above, are shot by professional photographers and show off her modeling aspirations.

She Has A Close Relationship With Her Mom

In a post for Mother's Day 2018, Esonica shared a video of herself with her mom and captioned it with an earnest message to the woman who raised her. "Dear Mom, you mean absolutely everything to me. You are the reason I strive to be the best version of myself," she wrote. "Hopefully very soon in the future I am able to give you everything your heart desires and even more. You have been my sunshine after the rain. The music that makes me dance and eases the pain. You are a phenomenal human being, you are the Queen of Queens!"

She Seems OK With Whatever Happens On 'Temptation Island'

Esonica announced that she's appearing on this season of Temptation Island on Aug. 8, writing, "The secret is out! I’m going to be on #TemptationIsland SEASON 2. You'll have to check it out to see what happened in paradise!!!"

It's easy to assume her positivity about the experience means her relationship with Gavin survives, but it's equally possible that maybe she found someone else she likes more. Either way, it seems like she's happy with the way things worked out.

More like this
‘The Ultimatum: Queer Love’ Is Officially On The Way
By Radhika Menon and Kadin Burnett
How To Follow All the 'Married At First Sight UK' Contestants On Instagram
By Sophie McEvoy
Here’s When You Can Expect More ‘Indian Matchmaking’
By Brad Witter
'Made In Chelsea's Liv & Tristan Are Hard To Keep Up With
By Sophie McEvoy
Get Even More From Bustle — Sign Up For The Newsletter