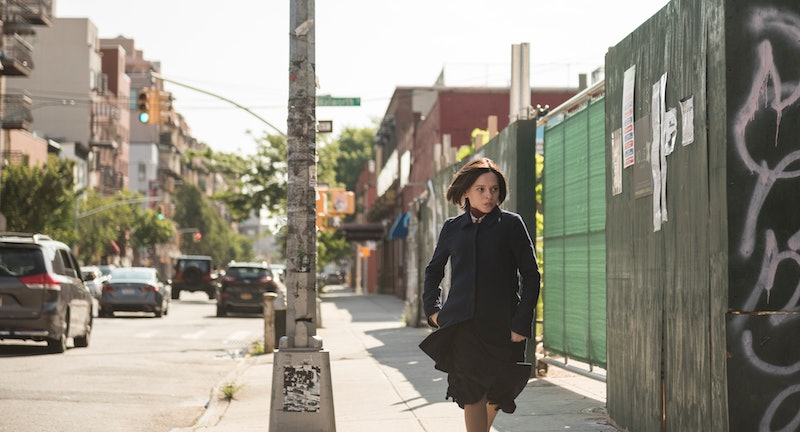 In Netflix's new four-part mini-series, Unorthodox, Esty Shapiro makes the radical decision to abandon her husband and the only home she's ever known. The show is based on the 2012 memoir of author Deborah Feldman, who fled her Brooklyn-based Hassidic Jewish community when she was 23. However, the Netflix series makes a few changes.

Feldman was raised in Williamsburg's Satmar community by her grandparents (her father was mentally ill, and her mother previously left the religious sect). When she was 17, she was set up in an arranged marriage; by 20, she'd had a son. But as Feldman told The New York Post, she was always rebellious of her strict upbringing: she read prohibited books like Little Women and Anne of Greene Gables, and stopped shaving her head a year into marriage, unlike what was customary. After she started taking classes at Sarah Lawrence College and got into a bad car accident, she decided to take her son and leave for good.

Unorthodox's Esty comes from the same orthodox community as Feldman, and is also set up in an arranged marriage. But she and her husband Yanky don't have a child together. And rather than having dreams of becoming a writer, Esty is a promising piano player.

The biggest difference between Feldman's life and the show is that when Esty leaves the Satmar community, she immediately moves to Berlin. Her mother lives in Germany, but she chooses not to reconnect with her after seeing that she lives with a woman. Her husband and his cousin also dramatically attempt to find her and bring her back to Williamsburg. In reality, Feldman temporarily lived with her mother (who identifies as a lesbian) in Brooklyn before settling in Manhattan's Upper East Side with her son. It wasn't until 2014 — two years after she published Unorthodox — that Feldman moved to Berlin.

Feldman told The New York Times that despite some initially distressing moments, like her visit to the Memorial to the Murdered Jews of Europe, she was drawn to Germany's efforts to acknowledge the Holocaust, and how open the country was to refugees. This is reflected in Esty's experience. "We brought Esty to Berlin to be able to talk about what it would be like for a Satmar Jew to flee to the country of the Holocaust's origin, and to reflect on how Berlin is built on trauma and how history creeps through everything there," Unorthodox co-creator Alexa Karolinski told The Times of Israel.

Feldman, for her part, is thrilled to be able to see her story onscreen. "People like me, we never saw ourselves being reflected back in the stories being told in popular culture, so we didn't really know how to create our own stories," she told The Jewish Chronicle. And even though not everyone will be able to relate to growing up in a repressive community, Feldman believes that "the essence of what's happening, that's universally understood."