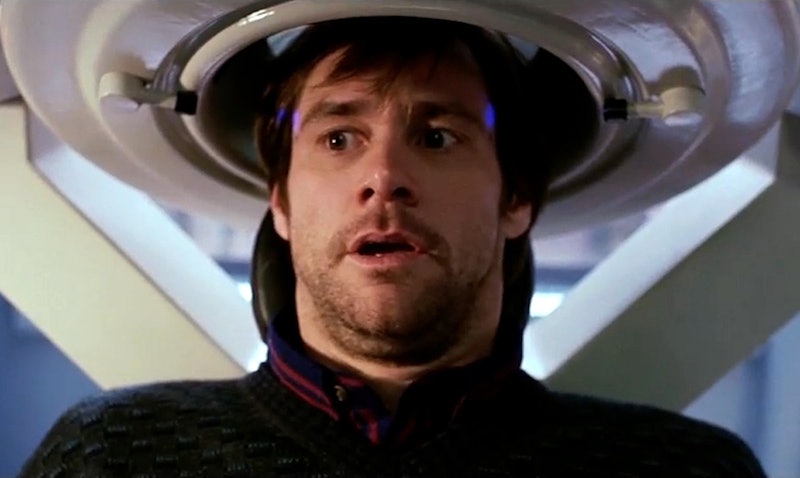 Fifteen years ago, Eternal Sunshine of the Spotless Mind viewers watched as Joel Barish erased his ex-girlfriend Clementine Kruczynski from his memory. Of course, it was only after Clementine rid their two-year relationship from her own brain, using Lacuna, Inc.'s memory erasure procedure. Knowing that Eternal Sunshine ends with the duo possibly giving their relationship another try, it's debatable whether Dr. Howard Mierzwiak's system actually worked. Still, the 2004 sci-fi romance posits a world where exes can be erased overnight with little more than a bad hangover the next morning. It's why on Eternal Sunshine's 15th anniversary, it's worth asking: is real-life science any closer to helping us erase those people we'd rather forget?

According to Dr. Crystal L'Hôte, an associate professor of philosophy at Saint Michael’s College in Vermont, the answer is yes — but just like the human brain, it's a bit complicated. L'Hôte, whose work is focused primarily on philosophy of the mind, tells Bustle that the science of Eternal Sunshine is actually rather accurate. "If you have people retrieve or recollect their memories, then that creates an opportunity to change them," she explains. When a person retrieves memories of a person as Joel (Jim Carrey) does through images and artifacts, like his skeleton portrait and potato dolls of Clementine (Kate Winslet), it "could open up a window for manipulating them."

Currently, doctors are using medications to dampen memories so they'll cause a person less pain or trauma. The most promising drug, according to L'Hôte, is propranolol. In 2016, the New York Times called it "the drug to cure fear," and it's commonly used to help those suffering from stage fright alter the feelings of fear and anxiety that were once associated with memories of public speaking. Yet what many people don't realize, L'Hôte says, is that propranolol also interferes with memory reconsolidation,aka the process of reactivating existing memories.

As such, propranolol is now being given to soldiers to help them deal with post traumatic stress disorder (PTSD), according to L'Hôte, which may feel like life imitating art for fans of Amazon's Homecoming, the sci-fi podcast turned-series that depicts scientists using drugs to "cure" PTSD in soldiers by erasing their traumatic war memories. Doctors also believe propranolol could one day be used to help victims of sexual assault or other violence by dampening their memories, says L'Hôte.

However, manipulating the emotions surrounding a memory doesn't erase it; it just changes the feelings associated with the memory. The dampening of memories is something our brains already do all on their own, L'Hôte says — it just takes time. The problem is not everyone's interested in waiting, which is why people are speeding up the process by using pharmacological and technological means like stimulation techniques such as Transcranial Magnetic Stimulation (TMS), which uses mild electric currents to treat depression.

"But if you actually want to destroy the cognitive content of the memories, as opposed to just the emotional valence," L'Hôte says, "that’s going to be a lot harder." In fact, it's nearly impossible. Although there are studies in mice as recent as 2017 that suggest that we can target memories as precisely as the scientists do in Eternal Sunshine, L'Hôte believes technology will never be exact enough to do the same in humans.

There are many "practical obstacles" when it comes to erasing memories in humans due to the way memories are distributed throughout the brain," she says. Complex memories, like those of a romantic relationship, aren't localized, meaning that "they don’t live in just one area of the brain. To get rid of them, then, you'd have to zap different areas of the brain.

It's why L'Hôte agrees with Eternal Sunshine's Dr. Mierzwiak (Tom Wilkinson) when he tells Joel that "technically speaking, the procedure is brain damage." Where they disagree, though, is with the character's assessment that there's "nothing you'll miss" after an operation like this. "It’s like destroying your cell phone so you can’t get a call from your ex-boyfriend," L'Hôte says. "But then you’re going to miss a lot of other calls that you do want."

Her belief that technology will never be precise enough to target specific memories in the human brain is why L'Hôte thinks that even all these years later, Eternal Sunshine is still science fiction. But a similar scenario to the movie could happen eventually if our brains were to change, which, is less unrealistic than one might think. "We’re becoming very cyborg-like," says L'Hôte. "If our brains were really to become much more digital and incorporate more components that are like a computer then maybe that kind of precision would be possible."

With our current brains, though, it just can't happen, and that's probably a good thing. Eternal Sunshine is about wish fulfillment. It's about having the option to get rid of memories of a bad relationship with a quickie procedure that is pain-free. Yet, it isn't failproof. The movie asks the same ethical questions surrounding memory erasure that L'Hôte and other philosophers continue to ask themselves. What are the effects on a person and their community after a procedure like this? And what could erasing memories do to the intrinsic value of truth and knowledge on our society as a whole? Simply, L'Hôte says, "If you erase the memories you’re not going to grow and learn from your mistakes and you’re likely to repeat the same mistakes that you’ve made before."

It's possible that repeating past mistakes is what Joel and Clementine are seen doing at the end of Eternal Sunshine, as they stand in a hallway laughing at their willingness to try it all again, despite (kind of) knowing how badly it ended. The film is critical of memory erasure, and in L'Hôte's opinion it should be, but she likes that the ending's ambiguity allows the audience to decide for themselves whether Joel and Clementine should get back together.

Eternal Sunshine may be all about two people trying to control their minds in the most extreme of ways, but, in the end, L'Hôte says, "There is a kind of letting go, where they just, in this really non-rational non-instrumental way, decide to take a leap." And while the film might not have accurately predicted the future of memory erasure, it does get something right. Most of us are willing to take a crazy leap of faith for love, despite knowing that we will suffer the consequences if it all goes wrong. At least until we forget about the pain and do it all over again.