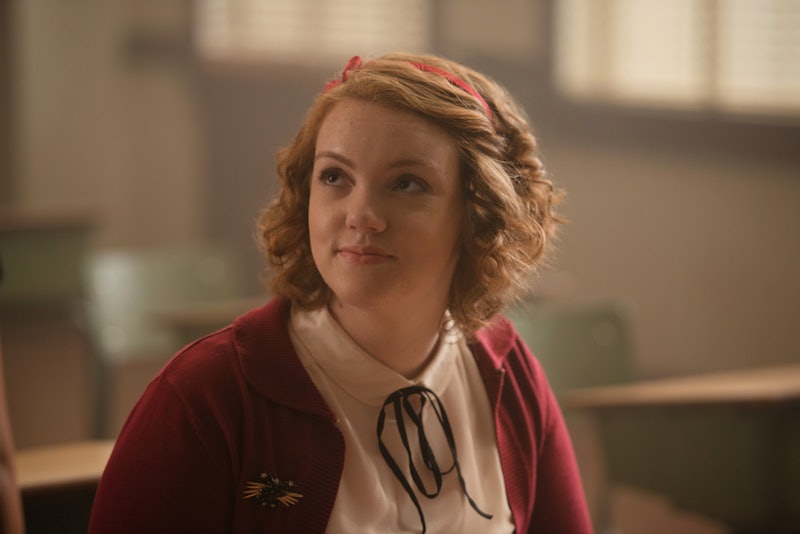 A very familiar face made her grand debut on Thursday's episode of Riverdale. That’s right, you weren’t imagining it, Barb from Stranger Things was on Riverdale, which, if you didn’t know it was coming, may have caught you completely off guard. She looked completely different when not dressed in '80s garb. Shannon Purser plays Ethel Muggs on Riverdale and, in case you missed it, she finally came out on top with a nod to Stranger Things when Cheryl said, “#JusticeforEthel.” The best part about the whole thing is that she’s set to appear on at least three episodes this season, so hopefully she doesn’t end up being taken into the Riverdale version of the Upside-Down. I don’t think any of us could handle a repeat of that nonsense.

While Shannon Purser may get her justice at the end of the episode, I noticed that there were some similarities between Barb and Ethel, besides the fact that those are some old school names. Both Barb and Ethel aren’t the most popular girls in school despite hanging out with people who are in the “popular” crowd. They both know the differences between right and wrong, even if they’re too shy to speak up at first. They both stand try to stand their ground, and, although it doesn’t work out too well for Barb in the end, Ethel gets her day in the spotlight. If we’re lucky, we’ll get to see even more of that in future Riverdale episodes.

Even though the show seems to be going in a completely opposite direction than the comic books, it’s still interesting to compare the characters to their TV counterparts. So I think we should take a look at what Ethel is all about in the comics. Hey, you never know, they seem to be keeping some of the stuff the same like a little love triangle between Betty, Veronica, and Archie (Ms. Grundy not included).

In the comics Ethel is extremely tall and the kids call her “big” Ethel. She’s absolutely head over heels for Jughead, even though he’s never been interested in her. She bakes a ton of food to try to win him over and he can never say no to her delicious cooking.

That all sounds well and great, except one major problem. In more recent issues of the comic, Jughead has been asexual and Cole Sprouse said he would love it if this show did the same. “I hope that huge corporations like the CW recognize that this kind of representation is rare and severely important to people who resonate with it,” he told Teen Vogue, “That demands representation. It would be a wonderful thing if that were the case.”

Sorry Ethel, you’ll might have to find someone else to crush on.

Regardless of what happens with her character, it’s relieving to have Shannon Purser back on our screens again. I swear, if Jason Blossom’s murderer goes for Ethel next, I will boycott. #JusticeforEthel!