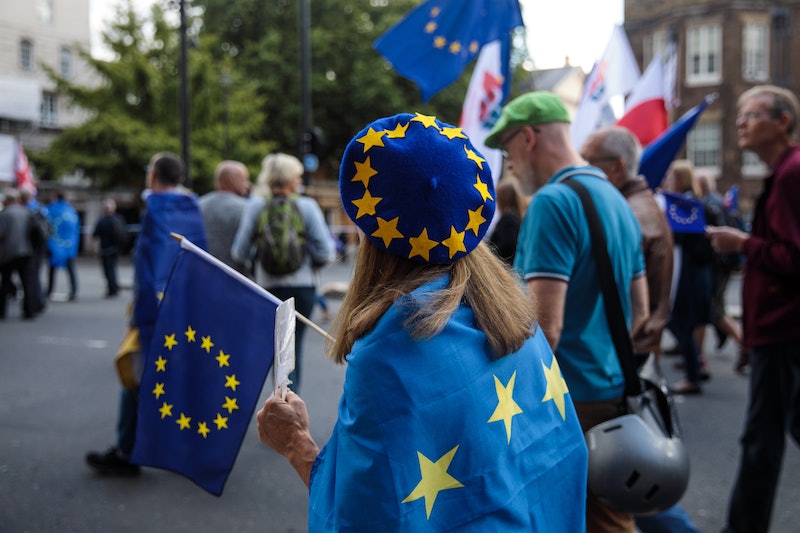 While the terms of the UK's departure from the European Union are still very much up in the air, one thing is certain: Europeans must apply to the EU Settlement Scheme if they want to stay in the country after Brexit. Because there's bound to be a lot of confusion around what EU citizens in the UK need to do post-Brexit, London Mayor Sadiq Khan wants to help make the transition less painful.

"We’re going to carry on being open-minded... We’re not going to suddenly become insular and xenophobic," Khan tells Bustle onboard the #LondonIsOpen bus tour that kicked off on Friday with a trip from City Hall to the University of East London, Stratford Campus. "And that’s why #LondonIsOpen was launched, to make sure people will carry on being the open-minded city that we are. We’ve got to make it easy."

The four-day bus tour around London will offer EU citizens free guidance on how to apply for settled status so they can stay in London after Brexit. Khan says he was "quite worried that too many would fall through the cracks" and end up losing their UK residency. With roughly 1 million Europeans in London, just 10 percent missing the 2021 deadline would mean 100,000 people losing their ability to live in the UK.

"I’ve currently been in the UK for 10 years, so I think that I shouldn’t have any problems. But I'm still quite confused [about] what is going to happen, and I think that’s the problem with the Brexit situation — that it’s not clear what is going on," says Micol Ragni, an Italian fashion designer who joined the #LondonIsOpen bus tour on Friday.

Tahmid Chowdhury, the cofounder of Here For Good, an organization offering free immigration advice as part of the #LondonIsOpen campaign, stresses that the application isn't optional.

"That’s a really big change, and that’s a sort of mentality change as well," Chowdhury says. "There are some people who have been living here for 40 years, and I think previously it would have been fair for them to assume that they didn’t need to apply for something for the right to stay here, but they do."

You'll be fine as long as your application is in before the 2021 deadline, according to Chowdhury, but he suggests applying early — namely because you might have to apply multiple times. No formal appeals process has been set up yet, which means people whose applications aren't initially accepted will just have to keep applying.

"It's much better to apply early, get your eggs in a row," he says. That means not putting it off until 2021.

Through the EU Londoners Hub, you can check you eligibility for settled status, as well as find immigration advisers around the UK who can help guide you through the process. The site also provides Brexit information in various European languages.

"We want to make sure all Londoners who are EU citizens carry on feeling welcome and that’s made as easy as possible," Khan says.

More like this
This Is When Netflix Is Going To Start Charging You For Sharing Passwords
By Darshita Goyal
Watch Jacinda Arden’s Devastatingly Honest Resignation Speech
By Sam Ramsden
Twitter Has *A Lot* To Say About The "Single Penalty”
By Sam Ramsden
What The UK Blocking Scotland’s Gender Recognition Bill Means
By Sam Ramsden
Get The Very Best Of Bustle/UK
Sign up for Bustle UK's twice-weekly newsletter, featuring the latest must-watch TV, moving personal stories, and expert advice on the hottest viral buys.