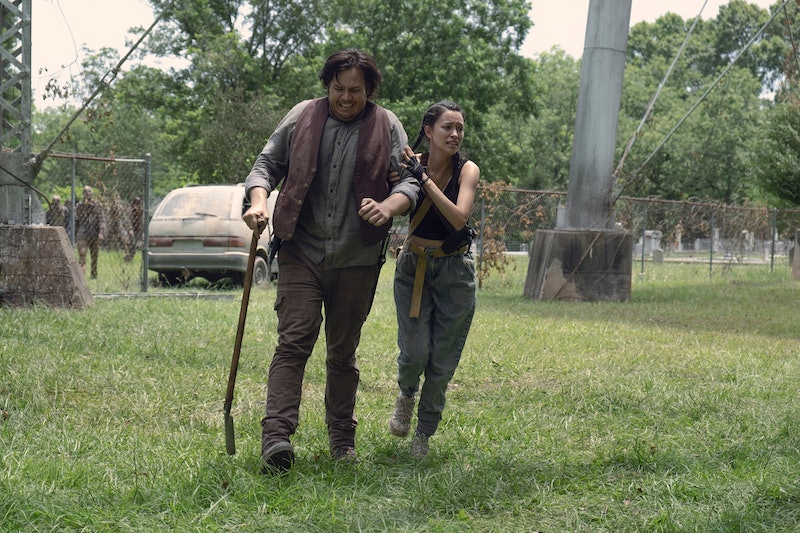 Maggie's exit from The Walking Dead may not be the only thing that's happened off-screen in Season 9. Other characters may be headed for the big door in the sky before we realize it, too. Did Eugene die on The Walking Dead? Rosita returned to the Hilltop without him, so where is he?

At the end of last week's episode, Rosita and Eugene made like hobbits hiding from Nazgul as they were set upon by what they thought were walkers, but may well be the Whisperers — a villainous group from the comics that disguise themselves as the undead. That's why it appeared that zombies were talking, but they're just creepy humans. This week, her once companion and would-be romantic professor was no where to be found. Ultimately, this week, Rosita manages to shoot up a flair and is rescued by Jesus and Aaron, but she's alone.

Rosita tells Aaron and Jesus she left Eugene in a barn and came to get help. What barn, and where, is not specified but there are a lot of abandoned barns in the area. Were they just running from walkers, he'd be fine, but savvy fans know that that isn't the case. By the end of the episode, a group including Jesus, Daryl, Aaron, and some other Hilltoppers form a search party to find him. Tara almost went. It's a whole thing. The point is, Eugene is missing and the journey to find him will probably lead to the Whisperers formally introducing themselves in the Walking Dead midseason finale.

Fans are pretty much in agreement that this is how the Whisperers will show up on the AMC series. In the Walking Dead comics, the villainous group follows two characters named Marcus and Ken — and when a search party goes out to find Ken, they attack. Rosita and Eugene are clearly standing in for those two characters.

Ken does not live, by the way, and the Whisperers end up taking a member of the search party hostage. Fans should definitely maintain a healthy sense of worry for Eugene leading into next Sunday's episode.

It's definitely setting the stage for a major showdown.

Eugene in the comics is still alive and kicking. He has a major role to play in the Whisperer War. He runs a bullet factory, like TV's Eugene did for Negan, and helps to extend Alexandria's radio signal so effectively that they make contact with a group in Ohio called the Commonwealth.

Meanwhile on the AMC series, Maggie is who knows where. According to Jesus and Aaron, she and little Hershel left with Georgie, the woman who gifted them with community building plans. Jesus in in charge of Hilltop now, and doesn't seem thrilled by the promotion. Maggie sends them letters... but how? Who is in charge of delivering post-apocalyptic mail? Also, where exactly is she? Most likely, this community that Maggie and Georgie went to is the Commonwealth, but we'll have to wait and see.

As for Eugene, he's injured and alone and not the most intrepid of survivors. Plus, the Whisperers are looking for him. None of this means good things are coming onThe Walking Dead. Amidst all of the time gap changes and new developments that keep cropping up for us outsiders, Eugene's disappearance is a reminder that this new threat is very, very real.