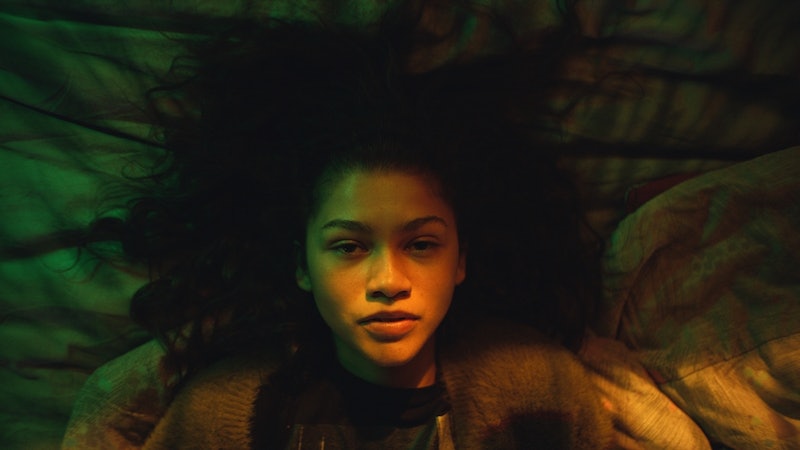 Within the first five minutes of HBO's new teen drama Euphoria, protagonist Rue Bennett flatly recounts the dark, difficult childhood that's shaped her into the teen she is today. Though brought up in a loving, middle class home, she explains, she's spent her life combatting a conflicting mix of diagnoses, eventually developing a drug addiction in order to numb the chaos constantly unfurling in her head. "I remember the first time it happened to me I got so scared I wanted to call 9-1-1," she says of feeling her heart stop while high. "And then over time, it's all I wanted. Those two seconds of nothingness."

It's a raw and unflinchingly bleak opening sequence, but one that sets the tone for the rest of the series, which follows a group of high school teens grappling with self-identity against the backdrop of drugs, sexuality, violence, and trauma. Premiering on HBO on June 16, Euphoria is perhaps the darkest depiction of teenhood since the 2007 British series Skins, which featured frank explorations of similar themes amid the turbulence of adolescence.

Zendaya leads the cast as Rue, who is 17 and fresh out of rehab following a drug overdose. Much of the show follows her slow, staggered recovery, but Zendaya tells Bustle that to her, it's just as much about the character discovering her own goodness. "Rue is special because regardless of the decisions she makes — or the mistakes or the things she can do to other people — she's a good person," she explains. "I don't think she's realized that she's a good person yet, but she's good. It's just about her being able to accept that and get to that point. Does she ever get there? I don't know. That's up to [viewers] to decide."

Though initially based on an Israeli series of the same name, Euphoria stems heavily from the personal experiences of series creator Sam Levinson. "I went in to meet with Francesca Orsi, who was head of drama over at HBO. We just started to talk about life," Levinson recalls. "I talked to her about my own struggles with anxiety, addiction, and depression. The Israeli series was a source of inspiration in terms of the initial thing, but [Euphoria is] a very personal piece about the anxiety of being a teenager and some of the stuff I was grappling with in terms of addiction and other things. It just took on its own life."

The series is also executive-produced by Drake, who, given his roots in the Canadian teen drama Degrassi, is no stranger to the genre. "He read the scripts and really responded to them. He's been a real champion for the show," Levinson says of the rapper's involvement.

"[Euphoria is] a very personal piece about the anxiety of being a teenager."

Euphoria is largely told from Rue's perspective, but the characters who flesh out her world must each contend with their own unique struggles. Jules in particular takes up a central space in the story, as she becomes fast friends with Rue. "In one of the first nights she goes out [in the town], it all gets turned upside down; then something beautiful and new is being built with Rue," Schafer says. However, Jules is also grappling with her trans identity. "Her drive is feeling affirmed — affirmed in her femininity and sexuality as someone who's had to navigate the world differently than a lot of her peers," Schafer continues, noting that as a trans femme actor, this aspect of Jules' story especially resonated with her.

Seeking affirmation and self-discovery are two uniting threads in the show. Cassie, for example, is trying to define herself by something other than her promiscuous past, while after years of being fat-shamed, Kat creates a secret online persona and begins uploading erotic videos in an effort to reclaim agency over her body. "She leads this double life. It's a big departure from who she is in person," Ferreira tells Bustle. "She feels like she's invisible and not the one who has a voice in her group of friends. [Everyone] sees her [as] just that girl who's around. [She's] on that border of adulthood and still being a child, and that line is very blurred sometimes. We've all lived through that age where you don't know how to figure yourself out."

But while Euphoria is a coming-of-age tale at its core, like Skins, it deals with many heavy, difficult themes rarely examined onscreen, such as with Rue and the myriad ways her addiction weighs on those around her, and with Nate, a hyper-masculine jock who lashes out in violence as an attempt to bury his sexuality. "On the surface level, he seems like this ultra-aggressive typical straight white jock. But for me, I look at him as a frightened little boy," Elordi says. "All of the things he does are reactions to the world falling apart around him."

"People should know they're not the only ones dealing with these things."

That's not to say Euphoria is all doom and gloom. Whether through Rue's PowerPoint presentation on what constitutes a good dick pic or, say, Cassie's drug-fueled orgasm on a carousel, Euphoria offers an honest, multifaceted perspective of teenhood. And dark as the show may be, the hope is that, in watching, viewers will come away a little less lost and lonely than its characters.

"We're telling people's stories. That honesty and realness is what people will connect to and what people need," Zendaya says. "These are real stories. People should know they're not the only ones dealing with these things."