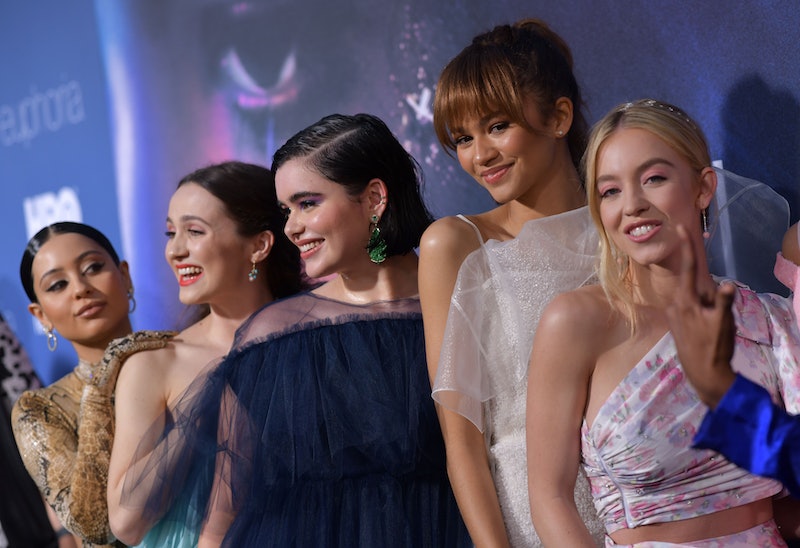 Our favorite gang of misfit teenagers, villainous monsters, and sweet lost souls are back. Euphoria Season 2 is officially in production, as announced on Wednesday, March 11, by the show's official Twitter account, meaning that their return to our HBO screens is imminent. And from the looks of it, it seems that Zendaya is just as excited for the series to come back as fans are.

The Euphoria Twitter account confirmed the news by posting a photo of stars Zendaya (Rue Bennett) and Angus Cloud (Fezco) smiling and laughing at what looks to be the cast's first Season 2 table read, with the telling caption "here we go !!!!!!!!!!!!!!" The account also posted a sweet photo of Zendaya smiling while reading the script, captioned with the fitting "season freaking two."

Even though production on the season just stared, fans can expect to see more behind-the-scenes previews to come on social media. "We're taking you behind the scenes as no show has before," Euphoria promised on Twitter, adding an affirmative "period" in a separate tweet. We need photos of Zendaya with every other iconic cast member (including rumored boyfriend Jacob Elordi), stat!

Season 2 plot details have not yet been revealed, but fans are not the only ones that are dying to find out what happens to Rue and the gang next. Zendaya told Elle in October 2019 that she "harasses" show creator Sam Levinson daily for new information. Later that year, she told Euphoria's music wiz Labrinth that she had read some of the Season 2 scripts, but wouldn't spill any details. "I talk to Sam every other day," she said. "I read four scripts that are f*cking brilliant."

Most of the first season's cast is expected to return, including Hunter Schafer (Jules) and Barbie Ferreira (Kat). But fans should also expect to see some fresh faces — Euphoria reportedly put out an open casting call for some interesting new characters in January. There's been no word yet on who will fill those roles.

Although a premiere date for Season 2 hasn't been announced yet, it's definitely time to get your maroon hoodies out of the coset — and make sure that your HBO log-in is still good.

More like this
Nicola Coughlan Shared A Lady Whistledown Excerpt From ‘Bridgerton’ Season 3
By Grace Wehniainen, Alyssa Lapid and Sam Ramsden
The 'Andor' Timeline, Explained
By Gretchen Smail
Alicent's Green Dress In 'House Of The Dragon' May Be An Act Of War
By Kadin Burnett
A New 'And Just Like That' Table Read Pic Confirms A Key Character's Return
By Jack Irvin and Grace Wehniainen
Get Even More From Bustle — Sign Up For The Newsletter