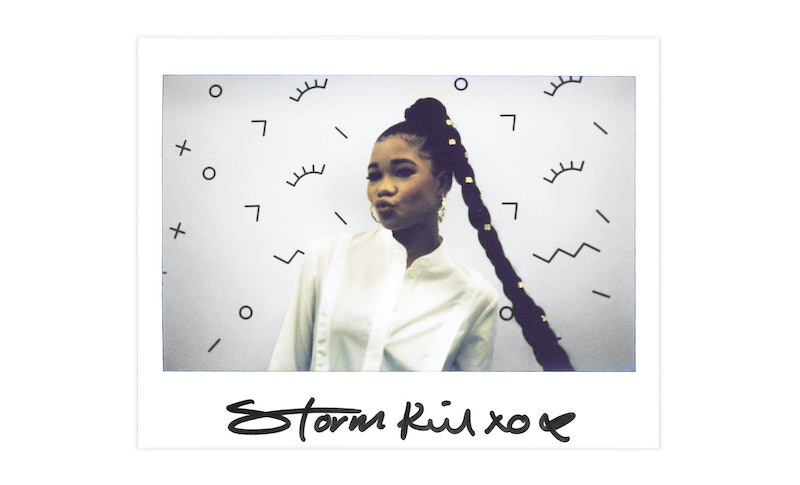 When celebrities hang out with Bustle editors, we want to give them the chance to leave their mark. Literally. So we hand them a pen, a piece of paper, a few questions, and ask them to get creative. This time, Euphoria and When They See Us star Storm Reid is leaving her mark in the Bustle Booth.

Storm Reid is aware of the power she has to change history with a story. At 15 years old, she cherry picks the roles she accepts because she's keenly focused on making an impact with every single one. "I want everything that I choose to be a part of to have a strong female lead and have a diverse crew and cast," she says. "So if those things don't line up with my morals and values, I don't want to be a part of it."

That purpose-driven instinct led her to a starring role in Ava DuVernay's film adaptation of A Wrinkle In Time, and another in DuVernay's acclaimed Netflix series When They See Us, which recounts the harrowing experience of the Exonerated Five. In the series, she stars as Lisa, a friend of Korey Wise (played by Jharrel Jerome). And it's in her scenes, however brief, that we see the only glimpses of 16-year-old Korey simply being a teenager, before spending 12 years behind bars for a crime he didn't commit.

"I feel like Miss Ava just did an amazing job of humanizing [the Exonerated Five]" she says. "I don't think [When They See Us] is going to give them back the years that they lost or the adolescence that they lost, but I feel like it will give them a piece of closure and understanding for all people to know what actually happened."

This June, Reid will star as Zendaya's younger sister Gia in HBO's Euphoria, a sometimes harrowing series that follows Zendaya's depressed addict Rue and other high-schoolers in her orbit as they navigate adolescence in the social media age.

"We're really touching on tough topics that teenagers are going through right now and scenarios that are happening," she says of the show's fearlessness in tackling issues surrounding addiction, anxiety, sexting, sexuality, bullying, and more. "I know that some shows talk about certain situations and leave it at that. But we're going to the tenth degree and showing what actually happens."

Though Reid has already become a Gen Z idol in her own right, she doesn't shy away from praising the Black game changers of the past. Along with her contemporaries Zendaya and Yara Shahidi, she amplifies the messages of past Black icons on social media, particularly poet-activists James Baldwin and Maya Angelou, and American abolitionist Solomon Northup. She says it's important for her to honor the past as she figures out her own future.

"They created the spaces that we're in now," she says. "And even though they're not getting recognized by the people that they should be getting recognized by, we're going to give them all the praise because they deserve it. It's just really about respect because I really feel like if my ancestors didn't do what they did, I wouldn't be here."

As Reid creates her own space by honoring the giants before her, she's got her eyes set on a goal that would make her ancestors proud: becoming an American action hero. "I would love to be in an action film, running around and [kicking] some butt."

Get to know more about the bright star that is Storm Reid in her Bustle Booth questionnaire below.