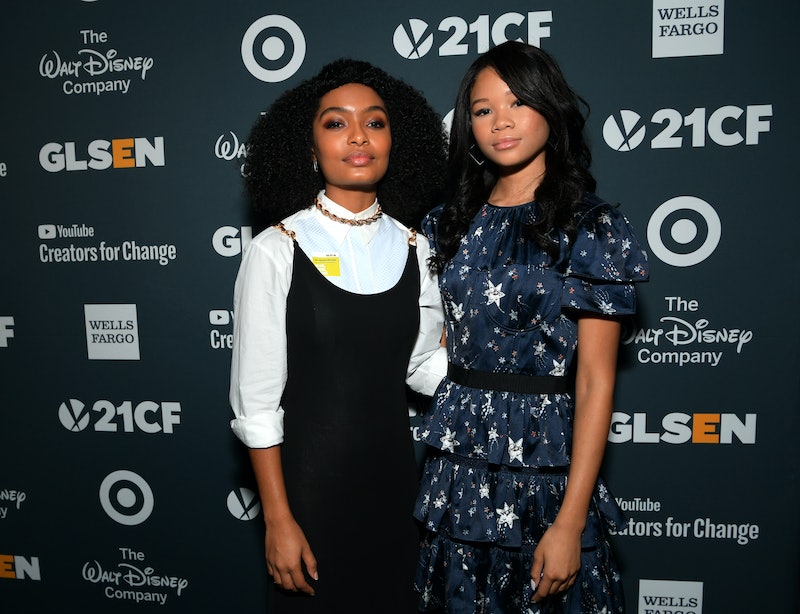 Prom season is upon us, and the promposals are in the air for non-famous folk and celebrities alike. Grown-ish star Yara Shahidi helped with her brother's promposal and the results are almost too much for a mortal heart to take. (And yes, you are about to see the word "promposal" no less than 850 times.) Before actor Sayeed Shahidi asked A Wrinkle In Time star Storm Reid to prom, he reached out to his sister Yara and his buddies for some guidance. And then, he created a promposal. Reid said yes, and the prom dates took a photo with the posterboard used in the promposal.

Yara shared the photo of Sayeed and Reid posing with the poster and noted that she was part of her brother’s promposal planning committee. Yara wrote,

“After big sister FaceTime consultations, conversations with his homies and knowing what would make her smile, Sayeed SURPRISED Storm with the CUTEST promposal #proudbigsis #jrprom #lovearollerset #canvaspainting”

Now, let's get to the actual promposal. Sayeed's promposal involved a homemade sign that reads, “Storms are rare in L.A. I’m lucky I found one. Prom?” Welp, that is a clever and sweet and perfectly succinct promposal message if I ever saw one. Around the promposal message, he painted some lightning bolts, flowers, a butterfly, a sun, and a moon. And finally, he attached two photographs to the sign. Man, Yara was not kidding when she called this "the CUTEST promposal."

Reid and Sayeed also posted the picture of the promposal promposterboard on Instagram. “So Lucky I get to go to my first prom with her !! #picscomingsoon,” reads Sayeed's IG caption. “He's just the absolute sweetest," wrote Reid. "Saturday can't come fast enough.”

As Teen Vogue pointed out, this will not be the first time Sayeed and Reid attend a school dance together. Sayeed asked Reid to Homecoming in 2017, and again in 2018.

Reid and Yara have been pals for a while, too. If you would like to see some more delightful content, look no further than the conversation between Reid and Yara that was featured in InStyle’s October 2018 issue. Highlights include Yara talking about doing the robot whenever she tries on outfits “because if you can’t do [the robot] well, then your look is either too tight, too loose, too long, or too short” and Reid telling Yara she is “definitely going to steal that robot trick.” Who has two thumbs and plans on stealing that robot trick, too? *Points all two thumbs at own face.*

More like this
Paris Hilton’s Tweet About The 2006 “Holy Trinity” Photo Will Make You Feel Old
By Marina Watts
What To Know About Simon Guobadia’s 3 Ex-Wives & Children
By Brad Witter
Adele Freaks Out After A Fan Used A Filter On Their Selfie At Her Show
By Radhika Menon
In Their Divorce Settlement, Here's What Kanye Reportedly Must Pay Kim K & Kids
By Radhika Menon
Get Even More From Bustle — Sign Up For The Newsletter