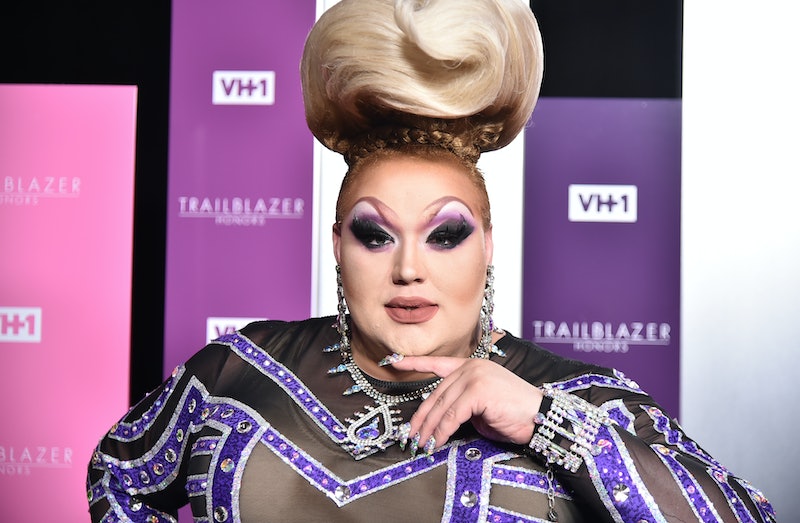 Viewers knew Eureka O'Hara was back with a vengeance the moment she bowed down to kiss the work room floor as the first queen to enter Season 10. Her Season 9 reign was ripped from her by an unexpected injury during a dancing maxi-challenge, and, "like a phoenix from the ashes," per her Season 10 entrance, she returned. Not only did she return to Drag Race more prepared than before, but she also recovered from a serious blow to the knee — a crucial foundation to drag performance. So it's safe to say that Eureka O'Hara is the official comeback kid of Drag Race, and she has earned that title and more. In an interview with Bustle, Eureka looks back on how far she's come and shares what's in store for her future.

Eureka is known as a boomerang drag queen, and not only because of what she's bounced back from physically. She's also been tested emotionally in the competition, particularly in Season 10. Many of the queens slotted her as "too much" or "too loud." And while she is a self-proclaimed "extra" person, Eureka has had to learn to come back from hateful comments. The good news is that she knows how to overcome negativity, and she's learned from those experiences.

"I’ve learned to be myself authentically," Eureka says. "When you are [yourself], your tribe will be found, and people will love you for exactly who you are." Even in a culture that's said to be founded on the pillars of inclusion and acceptance, Eureka struggled to gain acceptance from many of the other Season 10 queens, mostly because of her boisterous personality. But she has realized that her personality is also what brought her to the finale stage in Los Angeles, so she wouldn't change a thing.

"Honey, I wanna be on TV and movies, that’s why I did this!"

"I literally am in the best position that I could possibly be in without winning the crown," she says. "So I’m honored and blessed to have support, and that I made it in every episode. I missed out last year... I did not miss out on Season 10." Shantay, she stayed all the way up to the top three, and as much as she would've liked to win, Eureka says she knows Aquaria was also deserving of the crown. "You cannot take that away from her in any way," she says. "There’s not a single girl on the cast of Season 10 that I can say wanted to win as bad as I did, except Aquaria. And I truly believe that. And you know what I’m proud of the most? I gave that little beautiful, skinny, white, thin, New York fashionista ass a run for her money."

One thing Eureka hasn't revisited is her relationship with another Season 10 sister, The Vixen. The two of them have a somewhat tumultuous past and a tendency to disagree — their equally big personalities clashed more than once on the show. And when their rocky relationship was brought up during the reunion episode, things got pretty heated, and The Vixen walked out. At this point, Eureka says she knows where she stands, and that's all she can control. "I don’t really communicate with The Vixen much," she says. "I know that we’re both booked and busy, and happy from what I can tell. I think everyone wants to point the finger most of the time, and all I wanted to do was say, ‘Hey, I acted a mess. I really was embarrassed that I even acted that way in that moment, which is why I kept myself from doing it again throughout the season. And I wanna move past it.’ And that’s just where I stand."

As far as Eureka's future goes, she wants to keep coming back — to the screen, that is. "I’ve got the goal of being on Saturday Night Live," she says. "Honey, I wanna be on TV and movies, that’s why I did this!" For now, she just released a new single called "The Big Girl," and the music video is seriously iconic.

"The big girl’s gonna shine every day just by being me," Eureka says. "I'm big, I’m here to jig, and I didn’t win this gig. But I’m still here to motherf*ckin' party."