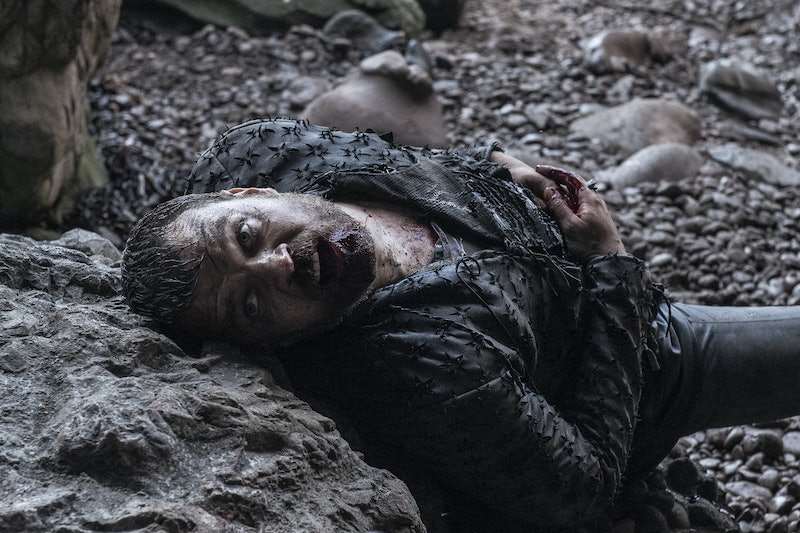 Westeros' most annoying villain is finally done on Game of Thrones. We can all rest a little bit easier. As far as we know, Jaime killed Euron on Game of Thrones — but don't worry, he still thinks he somehow won. Trust him to take credit for something he didn't do (the death of Jaime Lannister) with his dying breath.

Well, at least, he's probably dead. Game of Thrones didn't show a dead body. However, Jaime stabbed him real good at the end of their duel. He's almost definitely, most likely, absolutely dead as a doornail. He also thinks he's the one who killed Jaime Lannister. If in fact Jaime is dead (we also didn't see his body, though it is safe to assume) then what killed him is... a bunch of rocks. The Kingslayer wasn't even that weakened from the fight. He makes his way up to the Red Keep just fine.

The duel between Euron and Jaime truly was the most petty fight for two men to be having at that particular moment in this particular episode of Game of Thrones. They both had better things they should have been doing. Like, you know, getting the woman they allegedly both loved out of King's Landing, helping to evacuate the city, or at the very least saving themselves from Daenerys Targaryen's fiery wrath. Really? They're going to fight over who Cersei loves the most? In this climate?

Maybe it's for the best. So much of Daenerys Targaryen's rushed arc in Season 8 reads like an irrational angry woman stereotype, which sucks. At least there are some stereotypically dumb boys in the mix as well. Guess Jaime and Euron learned the hard way that toxic masculinity kills.

Euron was the last of the real chaotic evil men on Game of Thrones. First there was Joffrey Baratheon/Lannister, then Ramsay Snow/Bolton, and finally Euron Greyjoy. It was somewhat of a tradition on Game of Thrones, but all things must end.

The funniest thing about Euron's arrogant claim in his final moments is that it absolutely, in no way, matters at all. History certainly won't remember that he "was the one who killed Jaime Lannister," and it's possible that he won't be remembered for harpooning Rhaegal the dragon either. Hilarious. It would have been nice if Euron had been taken out by Yara — but it's fitting that Jaime Lannister got one last win in before his tragic demise, and that Euron died doing what he loved... bragging about something irrelevant to the situation.

Speaking of Yara, can we finally go check in with her now that Euron is dead? The Iron Islands are officially hers. She clearly had better things to do, and we're all thankful for it, but might she want to check in on this whole awful situation? Possibly start a resistance with the North now that Daenerys has taken over what remains of King's Landing? This isn't the end of House Greyjoy yet, and the best of them seems to be the last woman standing.