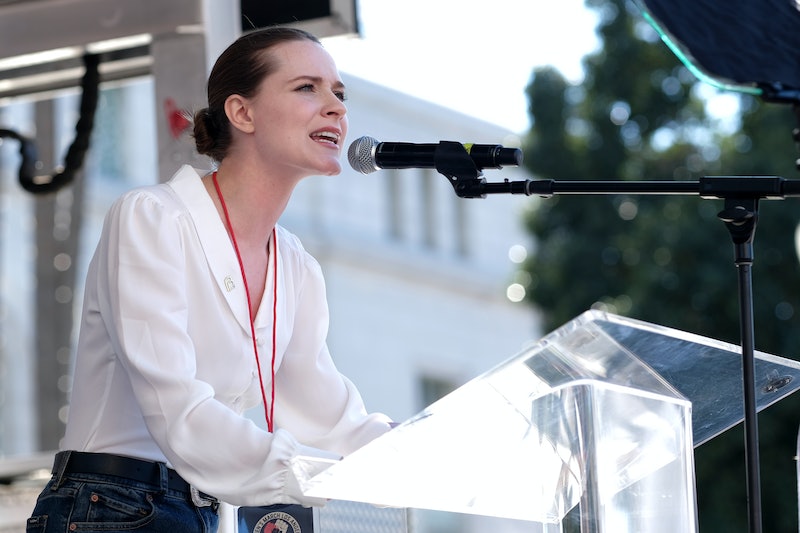 In one tweet, the actor shared photos from a past photoshoot, along with a caption about how her experience with intimate partner violence wasn't visible. "The day of this photoshoot, I was so weakened by an abusive relationship. I was emaciated, severely depressed, and could barely stand. I fell into a pool of tears and was sent home for the day. #IAmNotOk," Wood tweeted alongside pictures from the photoshoot. In a separate tweet, the actor also shared an image of her self-harm scars that she incurred during the abusive relationship.

The #IAmNotOk movement, which is supported by a new website and Twitter account, encourages survivors to share their stories using the hashtag #IAmNotOk to raise awareness about intimate partner violence. On the heels of Wood's tweet, scores of other people began sharing their stories and offering one another support. On its Twitter account, the #IAmNotOk movement lets people know that it's OK not to be OK. If you are in an abusive relationship, it's not your fault, you have nothing to be ashamed of, and you are not alone.

According to the U.S. Centers for Disease Control, "The term 'intimate partner violence' describes physical, sexual, or psychological harm by a current or former partner or spouse. This type of violence can occur among heterosexual or same-sex couples and does not require sexual intimacy."

While these statistics are sobering, an editorial in the Journal of Epidemiology and Community Health stated that though it's believed that intimate partner violence affects 25 percent of women, it's estimated that only between 2.5 and 15 percent of cases are reported. Underreporting stems from the fact that victims of intimate partner violence are often isolated from family and friends, and are threatened with harm if they leave or tell anyone about the abuse.

Perpetrators of violence can also threaten children and pets in an effort to control their partners. Because of this, pet friendly domestic violence shelters, like PALS (People and Animals Living Safely) Place in Brooklyn, N.Y. are becoming more prevalent. Aside from fear of retribution, many people don't report intimate partner abuse for fear that they won't be believed, which can increase their chances of being harmed if they are sent back to their partner.

In addition to living in fear, victims of intimate partner violence can suffer myriad health consequences. "[Intimate partner violence] is connected to other forms of violence, and causes serious health and economic consequences. Apart from deaths and injuries, physical violence by an intimate partner is associated with a number of adverse health outcomes," the CDC reported. "Several health conditions associated with IPV may be a direct result of the physical violence. Other conditions are the result of the impact of IPV on the cardiovascular, gastrointestinal, endocrine, and immune systems through chronic stress or other mechanisms."

Though there has been increased awareness about intimate partner violence in recent years, it's not OK that 20 people per minute are being abused by an intimate partner every single day, as #IAmNotOk reported on its website. That's 100 people in the time it took to read this story, and almost 30,000 people per day. With more awareness of the issues faced by people in abusive relationships like the kind brought by Wood's tweets, its possible to help survivors get the help they need.