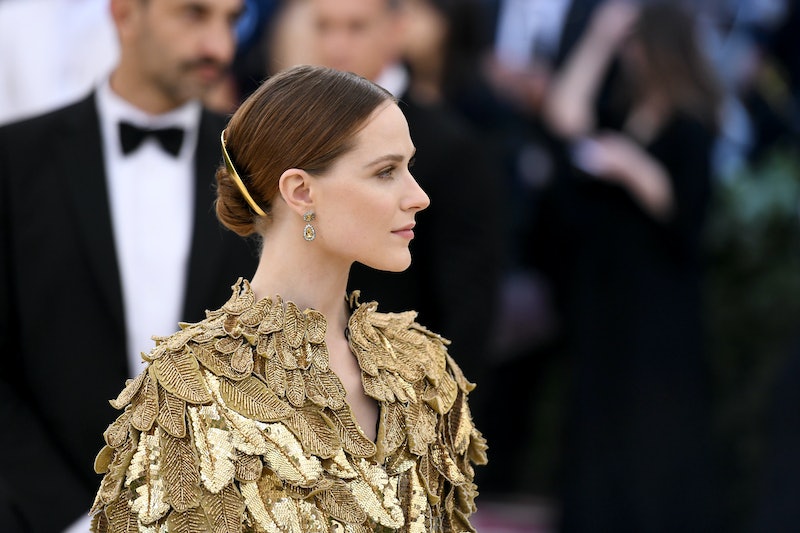 As part of an online campaign to spread awareness of domestic violence called I Am Not OK, actor Evan Rachel Wood shared a photo of her self-harm scars. She wrote, “2 years into my abusive relationship, I resorted to self harm [sic]. When my abuser would threaten or attack me, I cut my wrist as a way to disarm him. It only made the abuse stop temporarily. At that point I was desperate to stop the abuse and I was too terrified to leave. #IAmNotOk.” Many of Wood’s followers replied to the actor with messages of support or their own stories of surviving domestic violence. This kind of reaction is why experts say that even if photos like these might trigger some viewers, sharing them can help to destigmatize both issues and help others get the support they need.

“There’s no one right way to talk about self-harm behaviors,” April Foreman, April Foreman, a psychologist and board member of American Association of Suicidology, tells Bustle. There isn’t a lot of research, she says, about the potential benefit of destigmatizing self-harm through images like those that Wood posted, versus the potential harm of seeing triggering photos. But Dr. Julie Cerel, director of doctoral programs at the University of Kentucky College of Social Work, and president of the American Association of Suicidology, tells Bustle, “Showing that she still carries the impact after having been a victim of abuse was pretty darn powerful.”

Self-harm occurs in up to 4 percent of U.S. adults, and in 2010, the Telegraph reported that two in three of cases affect women. Self-harming behaviors can result out of a lack of coping skills, the National Association for Mental Illness says, which is why it’s possible that abuse can be a trigger for self-harm.

“Often times, people use nonsuicidal self-injury as a way of relieving their own pain or their own intolerable feelings,” Cerel says. “It was surprising that Wood said that [self-harming] was the only way she could stop [her partner] from hurting her.”

“We know in abusive relationships there's a cycle of abuse, there's building tension," Foreman says. "Then there’s a sort of explosion, [which could be] yelling, screaming, hitting. Then there’s a rapid de-escalation, which could be someone harming themselves. It’s a climactic event, and then it goes down below a certain threshold, and [the cycle] repeats.” During these phases of tension or escalation, Foreman says, people in violent relationships are often trying to modulate their or their partner’s emotions, and self-harming behaviors could be a form of that.

Foreman stresses, however, that abuse and self-harm are not directly linked. “I would not say [self-harm] is a ‘normal’ thing to do if you’re in a relationship with intimate partner violence.”

Cerel says that self-harm, like abuse, is often hidden, and it’s tough to see the warning signs that someone you love might be experiencing either, apart from physical signs of injury. This is why platforms like #IAmNotOk, which seeks to raise awareness and support for survivors of intimate partner violence, are so important.

Cerel says that if you’re concerned about if a loved one may be self-harming, the best thing to do is to ask them. For people who may be triggered by seeing images of self-harm scars, stepping away from social media and practicing self-care can be helpful. “If someone does feel triggered and feels like that this is something that they need help for, get into treatment if you're not already,” she says.

Though sharing images of self-harm scars on social media is controversial — Twitter banned content that "glorifies" self-harm or suicide in February 2018, and Instagram made changes to its platform in February 2019 so that "non-graphic self-injury scars" would not be shown in search, explore, or hashtags — experts say that at best, it can help open up a conversation that too often is shrouded in silence. With celebrities like Evan Rachel Wood sharing their stories, hopefully it will become that much easier for others to get help.