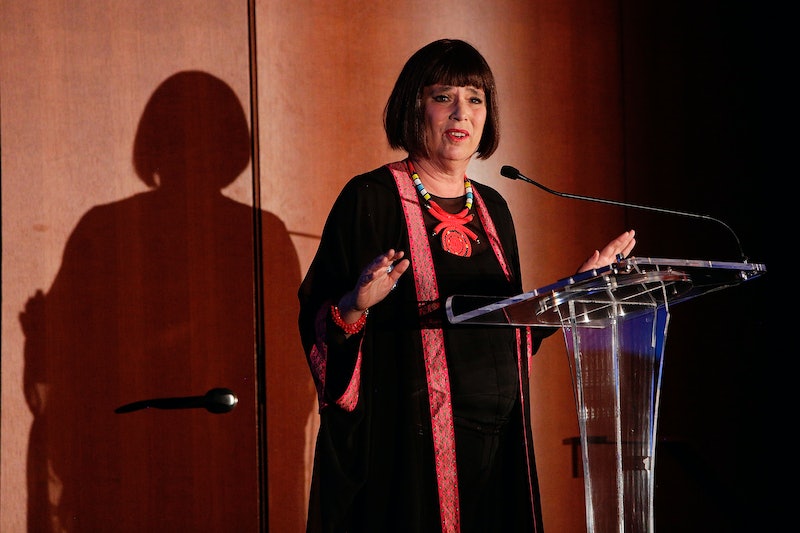 When I speak with iconic playwright and activist Eve Ensler, the first thing I notice is how unafraid she is to use direct, intentional language to reveal the truth. When asked even an introductory "how are you doing," she responds with the only reasonable answer anyone with a heart should be using these days: "How can any of us be doing?" She continues, "It’s so impossible. I think we’re all trying to figure out how to live a life in the midst of this." By "this", Ensler means the Trump administration, and she tells me how she's unwilling to allow the actions of our president to become normalized.

"What I know," she says, "and what we’ve seen from this last election is that we now have a president, a 'predator in chief' who not only himself confessed to sexual assault, who openly brags about grabbing women’s genitals, he’s been accused of rape, [but] he’s been accused of sexual harassment, and he surrounds himself with men like Bannon who has been charged with domestic battery." (In 1996, Bannon's then-wife accused him of assault, but Bannon pleaded "not guilty" and the case was ultimately dismissed.)

Ensler, who was honored earlier this month at New York's Athena Film Festival, has never shied away from speaking her mind. She is responsible for the groundbreaking play The Vagina Monologues, which remains one of the most significant cultural touchstones of the past two decades due to its embrace and reclamation of words used to describe women's bodies and experiences. And throughout the lead up to the 2016 election, Ensler penned several pieces of thoughtful, energizing journalism for The Guardian that served as both sharp and poetic reflections and powerful calls to action. "Rise, Sisters, Rise, Defeat Donald Trump" she implored in one piece; "It's Time For White People To Reckon With Racism" she demanded in another. And still, on Nov. 9, we all woke up in a raw, divided America that had not heeded her words, says Ensler.

"When he first announced that he was running," Ensler says of Trump, "everybody thought I was crazy [for voicing concern], and I kept saying 'no, you don’t understand, it’s real.'" Ensler has been fighting Trump, she says, for "for 30 years," and she recalls an event she organized decades ago, Brunch at the Plaza, to serve food to thousands of members of New York's oft-forgotten homeless community. "I know who Donald Trump is," she says. "Back in the old days, when I was working and supporting the efforts of homeless people who were trying to get rights, he was busy gentrifying New York and making sure more and more homeless people existed."

Who Trump truly is, Ensler says, couldn't be clearer to her. "There’s all kinds of talk about is this a coup, or not a coup, but what it feels like to me is that a group of white men who are billionaires, and corporate, have essentially seized our government," she says. And they have, she argues, "a white nationalist, anti-immigrant, anti-woman, anti-gay, anti-trans agenda, and what they want is more money and more resources for themselves, and they intend to dispense of us in pursuit of that."

This is a daunting situation for so many of us, but Ensler has been a radical feminist activist from the very beginning. So in this ever-fractured America, she says she's "doing a lot of organizing" and coping by continuing to fight as hard as ever. Just take Ensler's V-Day movement, which has, for 20 years, worked to end violence against women and girls (and the website for the organization makes sure to note that "women and girls is an inclusive term reflecting all those who were assigned and/or identify as female") by, among other actions, having hundreds of groups from around the world stage benefit performances of The Vagina Monologues to benefit local anti-violence groups.

"We are the ones we’ve been waiting for. That’s what I feel like now," Ensler says of organizations and movements like V-Day and its One Billion Rising campaign, Black Lives Matter, the protests against Trump's immigration ban, the Women's March, the protests against the Dakota Access Pipeline, and others. "We are seeing in every state, in every little town, people are at their Congressional offices, people are protesting, and I think what we’re seeing is going to be the new progressive world."

Despite being horrified by what she describes as "heartbreaking, hateful, violent legislation and executive orders," Ensler is buoyed by the activism, strength, and, more recently, the efforts to break down the "silos" that have divided people in America for so long. "I think what’s really important is to reach out of your own community, get out of your own circle and find people and ally yourself with people who need your protection, need your support, need your platform, need your resources," she says. "That’s what all of us should be doing right now."

And we can all look to Ensler as a leader. On Feb. 10, her Athena Film Festival honor recognized her as being one of the "extraordinary women" who've shown "leadership and creative accomplishments in the film industry." And on Valentine's Day, her One Billion Rising Revolution celebrated with a "Revolutionary Love" protest, as people across the world come together and rise to fight oppression. "The more we keep the reality of our stories and the reality of our experiences front and center," Ensler says, "the more possible it is to overcome these forces."

In other words: the future is here, and it's us.