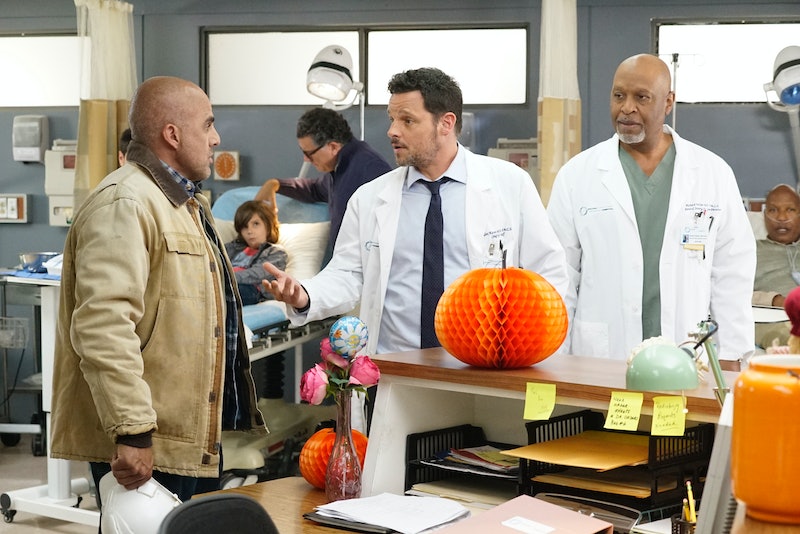 It's the spookiest time of the year! With Season 16's sixth episode airing on All Hallow's Eve itself, the show will be paying homage to the holiday in "Whistlin' Past The Graveyard," the next in a fine tradition of Grey's Anatomy Halloween episodes. While not every season has featured a tribute to trick-or-treating, the ABC series has offered up its fair share of memorably macabre hours featuring plenty of ghosts both metaphorical and literal, and even some honest-to-goodness zombies. And this year, some of your favorite doctors are about to discover some skeletons in their closets… or, more accurately, in their backyards.

According to the official synopsis of the upcoming episode, in "Whistlin' Past The Graveyard," viewers can expect a gruesome discovery at Pac North: "Alex is hoping to impress investors, but when he hears disturbing news about skeletons on the construction site grounds, he enlists Richard to help with distraction tactics." The surgeons at Grey Sloan will also be feeling the holiday spirit, even if there are fewer dead bodies (hopefully). "Teddy feels the pressure to be super-mom after tasking herself with creating original Halloween costumes for Allison and Leo, while Meredith fears she won't make it home in time for trick-or-treating with her kids. Elsewhere, Jackson tends to a pediatric patient who is upset she is spending her Halloween in a hospital."

Spookiest scene: After seemingly being shot to death while biting a man, a patient suddenly returns to life as a "zombie" and bites Leah Murphy in the neck.

Thankfully, it turns out that the drug-addled patient actually had a rare condition called situs reversus, in which all of his organs are reversed from their usual positions — which is why the gunshots to the heart didn't kill him, and why Murphy had trouble locating his heartbeat. In addition to that faux-resurrection, there's also the case of a little girl at risk of being literally scared to death (because her body doesn't produce enough adrenaline), a woman with a wound infested with maggots (which actually saved her life by eating any infection-causing bacteria), and Shane Ross feeling haunted by his deceased colleague Heather Brooks (RIP).

"I don't know anyone who isn't haunted by something or someone. And whether we try to slice the pain away with a scalpel or shove it in the back of a closet, our efforts usually fail. So the only way we can clear out the cobwebs is to turn a new page or put an old story to rest — finally, finally to rest."

Spookiest scene: Convinced that his foot doesn't belong to him, a man cuts off his own limb with a chainsaw in the middle of the ER.

How did a man get his hands on a chainsaw in Grey Sloan's emergency room? That would be thanks to the local chainsaw pumpkin-carving contest, which also brought in plenty of other creatively mutilated patients to the hospital. But the spookiness was leavened with a dose of sweetness, as Meredith took a cute young patient (future 13 Reasons Why star Dylan Minnette) "trick-or-treating for ears" in an effort to raise funds for the boy's surgery. In the end, Mer finally came to terms with her mother's recent death, as she and Richard poured Ellis' ashes down the drain in one of the OR's scrub rooms.

"Death means something different to all of us. We all have different ideas about how to honor the dead, different ideas of how to grieve, different ways of moving on. Well, I may not be an expert, but I do have some experience with losing people I love. And I say the right way to grieve is however the hell you want."

Spookiest scene: As Meredith travels the halls of Grey Sloan, she's watched over by the ghosts of her dearly departed friends and colleagues.

Actually more of a Día de los Muertos episode than a Halloween episode, this one is actually less about gruesome scares and more about fondly remembering those we've lost. While Season 4's "Haunt You Every Day" saw Meredith grapple with her mother's death, this Season 15 episode brought Mer face-to-face with her father's impending demise. After receiving news of Thatcher's illness, Meredith is able to visit her estranged father and arrive at some semblance of peace with him shortly before he passes away from leukemia. This one may not have evoked screams, but definitely plenty of tears.

Where will "Whistlin' Past The Graveyard" fall in this ranking? Find out when the eerie episode airs on Thursday, Oct. 31.