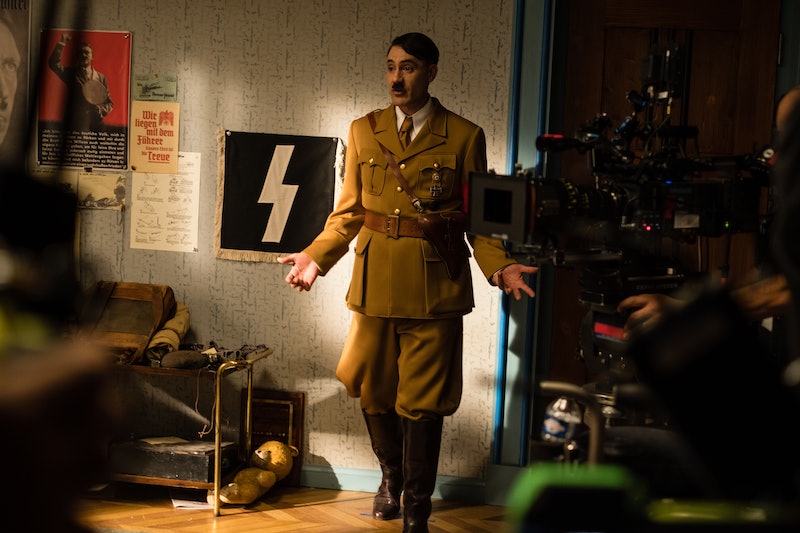 Like everyone on the right side of history, Taika Waititi abhors Adolf Hitler, and he's been putting his Jojo Rabbit press tour to good use, telling everyone who'll listen just how much he disliked playing the fascist dictator. To be clear, his portrayal of Hitler isn't entirely based on the man who led Nazi Germany through the second World War and was one of the most evil people to have ever existed. Rather, Waititi's Hitler is the clownish imaginary friend of a child. Even though the film is very much a satire, the Jojo Rabbit filmmaker and star still has some strong feelings about his role.

His Hitler solely interacts with Jojo (Roman Griffin Davis), a young boy growing up in Nazi Germany during the second World War. He's a part of the Hitler Youth organization, and as such, is very much caught up in the illusion of a happy, shiny Germany under the rule of his hero, who he's also made his imaginary companion. But Jojo's world comes tumbling down when he learns that his mother, Rosie (Scarlett Johansson), is anti-Nazi and has been hiding a Jewish teenager named Elsa (Thomasin McKenzie) in their home. As Jojo struggles to reconcile this discovery with his own personal beliefs, he leans on the suspect — and sometimes violent — advice of his pal, Adolf.

Using this device, Jojo Rabbit not only denounces but also mocks Hitler as a ridiculous, hate-filled figure whose beliefs and priorities can only be a joke to anyone rational. And, judging from what Waititit's said about playing him, that's the same energy he brought to the character:

"Week one down of our anti-f*ckface satire, Jojo Rabbit. Can't wait to share it with the world. Also, what better way to insult Hitler than having him portrayed by a Polynesian Jew? #F*ckYouShitler @jojorabbitmovie @foxsearchlight"

Early on in filming, Waititi tweeted a photo of himself flipping the bird at a poster of Hitler and made sure that both the tone of the movie and the irony of his casting were well-known to his followers.

"They said they really want to make it but they said, 'We're only interested if you play Hitler.' Which was lunacy to me."

When the film ultimately landed at Fox Searchlight, the studio insisted that he play the dictator, the director told Business Insider. He continued, "[Fox Searchlight] were right, looking back on it. If I worked with another actor maybe that person would have researched it too much or tried to do a more authentic version of Hitler and pulled away the buffoonery I was after."

"I was just embarrassed on set. Having to be dressed like that and having to talk to people. Often I took off the mustache between set ups or put a hat on. Or I would take the jacket off. But still, you catch yourself in a reflection and you’re reminded. For most people it’s something like seeing themselves and going, ‘I forgot, I got a haircut yesterday.’ For me it was, ‘Ah, I forgot, I look like Hitler.'"

Waititi also wrote and directed the film, which added another layer of friction for him, since he had to deal with other cast and crew while in costume. In the same Business Insider interview, he shared some thoughts on that pretty surreal experience.

“I’m usually quite lively on set, and I like to make everyone feel comfortable. I’d just be waltzing around and then catch a glimpse of myself. 'Oh, right, I’m dressed as one of the most evil people in human history.'"

Speaking to Vulture, Waititi stressed again how difficult it was to have the same set experience he's used to cultivating when he was in full Führer garb.

"I didn’t have to do any research, and I didn’t do any research. I didn’t base him on anything I’d seen about Hitler before. I just made him a version of myself that happened to have a bad haircut and a sh*tty little mustache. And a mediocre German accent."

Another actor might consider that research essential, but not Waititi. He explained to Deadline, "It would just be too weird to play the actual Hitler. And I don’t think people would enjoy the character as much. Because he was such a f*cking c*nt, and everyone knows that as well. I think people have got to relate to really enjoy the ride."

Waititi had a pithy comment to share on Twitter regarding a Redditor's comment on his casting. When a user posted that they were "uneasy" about him playing a white man, the filmmaker poked fun at the idea that people of color are somehow usurping historically white characters. Hailing from New Zealand, the director's father is Māori and his mother is of Russian Jewish and Irish descent, which certainly adds another level to his Jojo Rabbit role.

"I think it was a little difficult for people to figure out if it was a good career move, and I can f*cking totally understand. Who really wants to see themselves as Adolf Hitler on a poster?"

The imaginary Hitler character isn't even included in the novel, Christine Leunens' Caging Skies, which Jojo Rabbit is based on. Waititi told The Hollywood Reporter that he found the hook when he added Jojo's controversial imaginary friend to the script. Unfortunately, he eventually had to embody him too.

"That was a sad moment for me, yelling at the crew dressed as Adolf Hitler in public. I looked like Charlie Chaplin in The Great Dictator."

Also to THR, Waititi recalled a memory of yelling across a river to his crew. He was describing how he wanted a certain shot framed, but he was still in full Hitler garb.

"If you look at the details on the uniforms, there’s lightning bolts on the belt buckles, a skull and crossbones on their hats. So it was like this make-believe type of thing, which is a boy’s fantasy when they were creating all that stuff."

In a chat with Entertainment Weekly at the Toronto International Film Festival, Waititi described the moment when he realized how immature all the Nazi imagery and symbology was. "It annoyed me a lot catching my reflection in the mirror and seeing myself," he continued. "I felt so ridiculous and it did look ridiculous."

It would be pretty concerning for anyone to enjoy playing Hitler, so Waititi's comments only serve to underline that Jojo Rabbit is, in fact, a "f*ckface satire" that doesn't give the dictator any more serious consideration than he deserves.