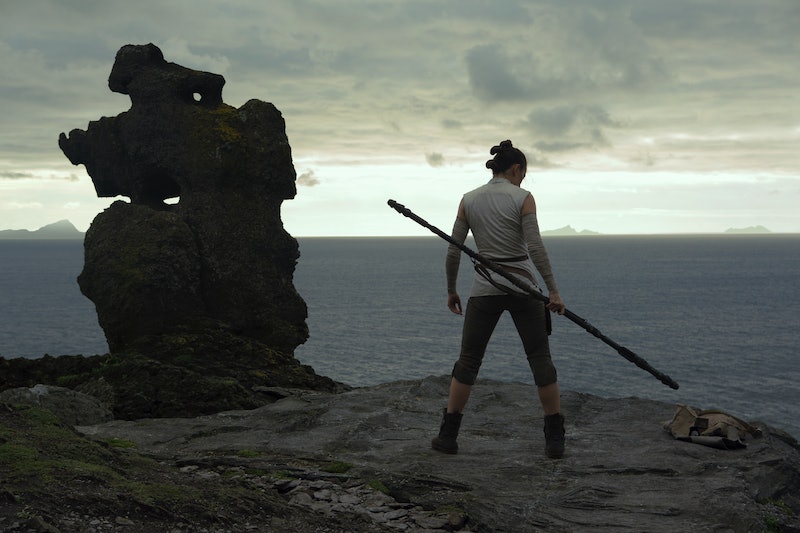 Spoilers ahead for Star Wars: The Last Jedi. Since Rey, the lead character in the Star Wars sequel trilogy, was first introduced, fans have been theorizing about how she relates to the main group of characters or is connected to the story. Now, as we all know, Star Wars as a movie saga is a story about familial legacy, specifically that of the Skywalker family and their various cohorts. So as soon as Rey was revealed, everyone assumed that she just had to be related to someone, right? The Force Awakens set her up as an orphan abandoned on the desert planet of Jakku, who longed to reunite with her parents and eagerly awaited her return. The Last Jedi sadly doesn't offer any more definitive evidence as to who Rey's parents are, but there are a few new clues in Last Jedi about Rey's parents that suggest the franchise has been keeping it all in the family.

What The Last Jedi does offer, first and foremost, is a very literal "explanation" as to who Rey's parents are, but it can't totally be trusted. Throughout the film, Rey and Kylo Ren, aka Ben Solo, have formed a sort of psychic bond and use telepathic communication via the Force to speak with each other across the galaxy. Towards the end of the film, it seems like Rey and Ben are about to team up, and Kylo Ren uses his "knowledge" of Rey's parents to try and lure her to the dark side. Kylo taunts her with what he says she allegedly already knows: that her parents were nobodies who sold her for gambling and drinking money. "You have no place in this story," Ben says to Rey. "You come from nothing. You are nothing." But can't we trust Kylo Ren's story? Not necessarily.

Knowing that Kylo Ren is unreliable and would say anything to lure Rey to his side, we have to take what he says with a grain of salt and look elsewhere for hints of Rey's lineage. And we can find one example by looking no further than Kylo himself.

As shown in the movie, Kylo Ren and Rey have seemingly equal powers. In one of the many climactic battles in The Last Jedi, Rey and Kylo both reach for the blue lightsaber once again, only this time, with Kylo uninjured, the pull is the same on both sides. The lightsaber hangs in mid air, pulled equally on both ends until the point at which the Jedi weapon is split in two. That they have equal strength would suggest they are somehow related, perhaps even brother and sister. In the Star Wars novels (which are no longer canon) Han and Leia have a son and a daughter together. But it would be weird that Han and Leia may have sent away their younger daughter for safety reasons while their older son went off to train to be a Jedi with his uncle, Luke Skywalker. And besides, wouldn't Han and Leia recognize her?

But perhaps Rey is a Skywalker, just not a Solo. Everyone knows that the Force is strong in the Skywalker family, and Leia is the Skywalker in the Han and Leia couple. And The Force Awakens did suggest that Han and Leia parted ways after being together for a while. So it's totally possible that Leia had a secret second baby who wasn't Han's. This is sort of hinted at when Rey visits a deep cavern of darkness on Luke's secluded island. She comes upon an icy mirrored wall that she gazes into. Tapping into the Force, she asks the mirror to show her her parents. A silhouette emerges from the shadows, and the outline looks mysteriously and eerily like that of Leia Organa. The Leia figure lingers for only an instant before the reflection then morphs back into Rey.

But that, too, would be strange right? Leia and Rey spend enough time together in The Force Awakens and The Last Jedi to the point where not mentioning to Rey that she's her mother wouldn't only be silly, but downright cruel. There is, however, evidence to suggest that Rey might also be the offspring of Luke himself. Luke and Rey have similar backstories, were both left on desert planets as orphans, and have incredible power with the Force without any formal training. And they bond together very quickly in The Last Jedi, much like Rey did with Han in TFA. But neither Luke nor Leia ever act like they're keeping a secret from her, and it would be just too goofy if neither of them know who she is right off the bat. Luke and Leia are both powerful enough in the Force that they'd have to recognize her, instinctively knowing who she was from the start.

So it sounds like Kylo Ren's story might be right after all. But even if Rey's parents are just nobodies who sold her to some scum on Jakku, there's still another theory that would explain her power. Rey could essentially be a Force baby, willed into existence by the Force itself, just like another Jedi we all know and hate/love: Anakin Skywalker. The Phantom Menace revealed that Anakin's mother just found herself pregnant by some sort of divine intervention. It's totally possible that Rey is yet another product of the Force creating some all powerful Jedi through miraculous insemination. Which would make her very special indeed.