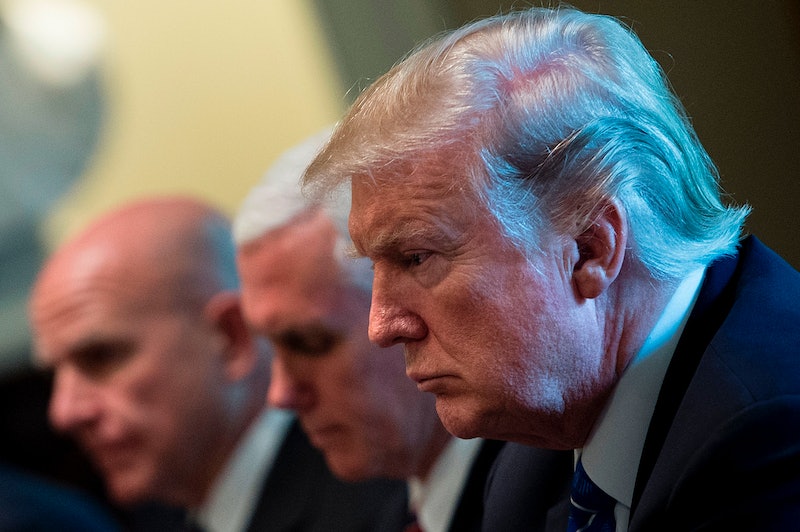 Ever since Donald Trump became president, activists have been keeping an eye on the current administration and the kind of executive orders the president has signed. Activists have felt that Trump's rhetoric has long been a cause of concern for religious minorities, racial minorities, women, working-class Americans, and other vulnerable segments of American society. Particularly when it comes to gender, advocacy groups have expressed their fears about what Trump's administration could take away from women.

Cause for concern among activists isn't baseless. Several instances of Trump's rhetoric have led people to view the president with a strong dose of skepticism. In a video leaked a month before his 2016 presidential campaign, Trump could be heard boasting about grabbing women "by the pussy." Although the president apologized for his language later on, a dent had been left in the trust of the American public.

In addition to his craven statements about physically hounding women, the president's pre-presidential position on rolling back reproductive rights like overturning Roe v. Wade, expressing his plan to defund Planned Parenthood, reportedly saying in 2004 that pregnancy is "inconvenient" for business, and using ad hominem attacks on female politicians and journalists, have forced people to be wary of the administration's attitude toward women and their rights.

Here's a list of what the administration has already done in regard to women's rights.

Almost immediately following his inauguration, Trump signed the executive order for the Global Gag Rule, which prohibits organizations from mentioning "abortion" and in the failure to do so, denies them financial help. Such a move could expose women and young girls to early deaths and result in a higher number of unsafe abortions.

During the campaign trail, Trump vowed to overturn Roe v. Wade, the 1973 Supreme Court verdict that stated that women had the constitutional right to abortion under the Fourteenth Amendment. "That will happen, automatically in my opinion," Trump said in 2016 while claiming that he would appoint judges suitable for the task.

To deliver on that promise, right his inauguration, Trump picked anti-choice Neil Gorsuch as his pick for the Supreme Court.

In March, Trump revoked Fair Pay and Safe Workplaces order, which was signed under former president Barack Obama. The order demanded companies and enterprises to follow 14 labor and civil rights laws, which would protect laborers working for such entities. It was a critical order that was meant to help working class women, especially, from workplace abuse and transgressions.

Two rules in the order involving paycheck transparency and prohibiting employers from making decisions based on sexual bias. Without those two rules, women are even more vulnerable to sexual harassment, arbitrary firings, and unfair wages.

In April, Trump quietly signed a bill that would give states the power to withhold federal funds from centers that provide abortion services such as Planned Parenthood.

5. Trump Offers To Support Planned Parenthood On One Sinister Condition

In March, Trump's administration reportedly offered to support Planned Parenthood on one condition: it had to stop providing abortion services. The offer of conditional support, however, was wholly rejected by Planned Parenthood president Cecile Richards who said, "We won't back down in the face of threats or intimidation, or turn our backs on the patients who count on us. Not today, tomorrow, not ever."

Trump has frequently appointed people to agencies they have openly opposed. In this particular case, Trump appointed openly anti-choice Roger Severino as the head of the Office of Civil Rights. Severino has been an open opponent of same-sex marriage and abortion, so his appointment to the very Office of Civil Rights not only endangers women but also disenfranchised LGBTQ groups in America.

Trump's support for defunding the United Nations Population Fund program is one of the biggest anti-woman moves the president has pulled. The program is meant to educate new families on planning for children, maternal health, and other services that are critical for women from financially unstable backgrounds.

With these examples out in the open, it is almost impossible to think Trump's administration is one that advocates for the safety and prosperity of women.

More like this
How To Fight For Reproductive Rights, Based On How Much Time You Have
By Courtney Young
How To Support Gun Control Reform Right Now
By Morgan Brinlee and Carolyn Steber
34 Quotes That'll Inspire You On Juneteenth & Beyond
By Syeda Khaula Saad and Siena Gagliano
17 Powerful Photos From March For Our Lives Protests Across The U.S.
By Michelle Toglia
Get Even More From Bustle — Sign Up For The Newsletter