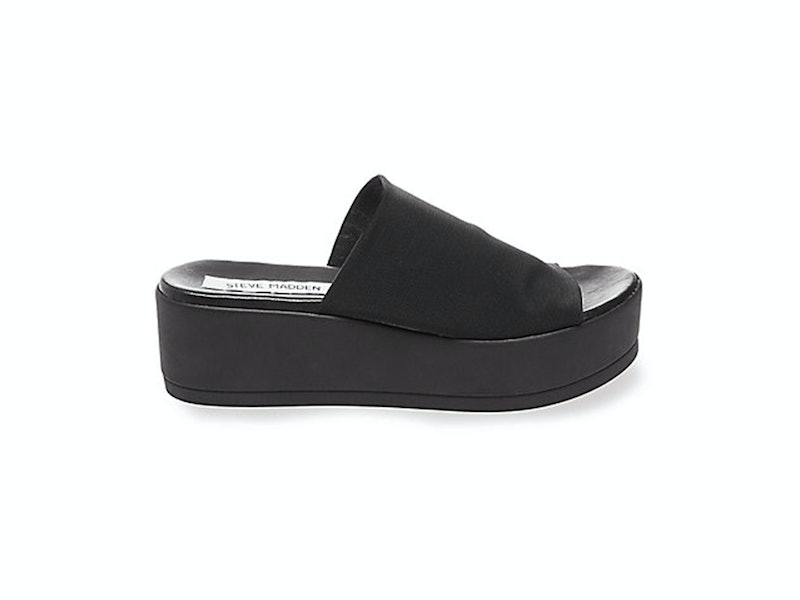 Fwap. Fwap. Fwap. Fwap. The sound of the Steve Madden Slinky alternating slaps between the ground and the wearer's feet echoes in the memories of just about every person who grew up wearing shoes in the late '90s and early '00s. They were a simple platform sandal with a thick, stretchy, usually black band. Owning this minimalistic slide was essentially a footwear requirement if you had any hopes of being considered stylish in the early aughts.

The Slinky was far from the first Steve Madden shoe, but the eponymous founder of the brand tells Bustle the release of that design in 1994 seemed to coincide with the company becoming a household name. "[The Slinky] was just a great shoe. It had the magic," Madden tells Bustle. "What can I tell ya? Like a great song. What can you say? It's just one of those things."

The Slinky certainly seemed like the magic spell the brand had been waiting for: In the recently released documentary Maddman: The Steve Madden Story, Daianara "Dee" Amalfitano, former president of specialty brands for Steve Madden, recalled that after The Slinky was released, "all of a sudden, every girl I spoke to knew who Steve Madden was."

Fellow shoe designer Sam Edelman agreed, saying in the documentary, "I remember he had some monster shoes. Big bottom shoes. And then he had a shoe called The Slinky. And The Slinky was huge."

Although the name Steve Madden is practically synonymous with '90s footwear, Steve Madden the man got his first job in the early '70s, working in the basement of a shoe store called Toulouse. "It was such a creative time in the shoe business when I started," Madden says in Maddman. "[The] fashion explosion was platform shoes." Specifically, the Glam Rock styles out of England would remain a huge influence on Madden's work through the heyday of Steve Madden shoes. "I loved them. They were great. They were theatrical," Madden explains in the film. "I would try them on in the basement."

After some time in the basement of the shoe store, Madden says he made his way to the selling floor, where he got even more obsessed with shoes and the role they played in women's day to day lives. "I was trying to figure out why something became big, why something became popular," he says in the documentary.

Madden took a break from shoes until after college, when he got a job at Jildor in Long Island, then moved to New York City and started working at L.J. Simone Shoes where he got to do "every job in the shoe business." He lived in the East Village, which was home to many in the post-punk, hardcore set, plus was heavily involved in the club scene during the early '80s. The grunge-y styles worn by residents of that neighborhood undoubtedly had a significant inspirational hand in the designs Madden brought to the shoe industry once he launched his company in 1990.

"Grunge was big back in the '90s when we first started. Shoes had a more masculine look to them," Amalfitano says in the documentary. "They were a little bit rougher and tougher. It's because of that whole grunge phase that music went through, so our inspiration starts from there. Steve really is very music-focused."

Madden started by making shoes in his garage, and his first hit style was called The Marilyn. "It was a little slide," Madden says in the documentary, "but if you wear it under your jeans it looked like a boot." It lacked the thick sole so widely associated with Steve Madden today, but had the minimalist sensibilities that would make The Slinky so popular years later.

Madden started selling his garage-designed shoes to every store he could out of a red car driven by his former doorman, David Cristobal. Eventually, Madden was connected with Jordan Belfort to help with fundraising for Madden's shoe company. Yes, as in The Wolf Of Wall Street Jordan Belfort, a film Madden says depicted their lifestyle during that time quite accurately — "though I don't know if I was that dorky," he says in the documentary. The money Belfort helped Madden raise was used to build the business and open his first brick-and-mortar store. When the company started, it was just Madden; Cristobal; Wendy Ballew, the current director of operations; and Arvind Dharia, the current CFO.

With his chunky platform designs aimed at teenage shoppers, Madden was considered a bit of an outsider in the high-fashion world when he first started to seriously hit the scene. "Both the fashion industry and, I think, the media industry at the time did not take teenagers seriously," Mary Clark, the Former Creative Director of Sassy, says in the documentary. Madden, however, did.

After the Marilyn came the Mary Lou, Madden's version of the Mary Jane. "We made a shoe that was for a market that wasn't being served. It was truly young fashion. The field was sort of empty," Madden says in the documentary. It's that Mary Lou shoe that's featured in Wolf Of Wall Street.

The team continued to tap into the oversized platform format that seemed to be working so well for them. "Our biggest goal of the day would be 'how much higher do you think we can make this heel? How much higher can we make this platform before Steve, like, kills us?'" Amalfitano says.

Being anti-fashion was something that always a mission of the brand. Perhaps you recall those ads with the big-headed, skinny-bodied, large-footed cartoon girls? "We wanted to do something that wasn't like other fashion companies with the beautiful girls and the poses, so we did something a little unique," Madden says in the doc.

Shortly after the first series of those ads were released, The Slinky arrived. The combination of those striking ads and a platform heel that was cool and accessible to the masses seemed to create a perfect storm of popularity for the brand. Although a rep from the brand tells Bustle that they don't publically share sales statistics on individual styles, several sites (including the Steve Madden UK blog) report that big-time celebs like Britney Spears and the Spice Girls rocked The Slinky — so it's safe to say just about everyone else wanted to wear them too.

When coming up with what would ultimately become an iconic '90s shoe, the design team went through several iterations during the brainstorming process. "We tried different bottoms," Madden tells Bustle, including one that was about twice the size of the final product. Once they reached that sweet spot of just the right height and type of stretch fabric, "the Slinky was an instant hit," Madden tells Bustle.

In the documentary, Madden's employees recount stories of his being inspired by shoes he saw on the street. "I've actually seen him say, 'Let me buy you a new pair of shoes and let me take the one off your foot,'" Karla Frieders, Chief Merchandising Officer for Steve Madden, says in the film. However, beyond the grunge styles that had always been a huge influence for Madden, he tells Bustle he doesn't recall any specific inspiration behind The Slinky.

"We were into that kind of flat shoe at the time, and it just sort of fit into what we were doing," Madden explains, noting that they had worked with some stretch fabric before, but never combined with this type of platform bottom. "It's just a magical, magical shoe."

The Slinky continued to be a bestseller for the brand until it was discontinued from the collection in 2000, the brand tells Bustle. In 2001, Madden was sentenced to 41 months in prison for stock fraud, but continued to consult for his company during that time. After he was released, Madden admits he struggled a bit to get back into the swing of designing hits. "I did feel being out of touch with the styles and not being able to put my finger on the winners. Since so much of styling and design is context, you know? So, I was out," Madden says in the documentary.

Plus, there was a noticeable shift in popular shoe styles: We teetered our way into the 2000s on stilettos, not chunky platforms. The anti-fashion aesthetic that had made The Slinky and other Steve Madden shoes a hit was no longer all over the red carpet. "That's not my look, so I don't have a feel for that," Madden says in the documentary of the dressier, strappy heels. "I know it's fabulous. I know it sells like crazy."

Eventually, though, nostalgia got the best of modern-day shoe buyers. The '90s resurgence in fashion is still going strong, which includes a renewed fondness for those chunky, platform heels. "Vintage" Slinkys are going for up to $50 on eBay and Etsy. In 2016, Steve Madden announced the brand was releasing an updated version of the shoe.

But it's not an exact match to the original Slinky: "We changed it a little bit, made it more modern," Madden tells Bustle. Crystal Ro at BuzzFeed pointed out that the sole and stitching are slightly different, but it's essentially the same sandal you came to love in high school — all the way down to the signature fwap.

A rep for the brand tells Bustle that the brand does not "release numbers/statics for individual footwear styles, but but the shoe relaunch was very successful with the public." There's no better sign of a true icon than a glorious comeback.

For a fascinating look at the entirety of Steve Madden's career, check out MADDMAN: THE STEVE MADDEN STORY, available now on iTunes.

More like this
These Are The Best Socks A Woman Can Buy
By Lisa Fogarty
How To Wear A Bucket Hat Like Rihanna, Dua Lipa, & More
By Allie Fasanella
15% Pledge Director LaToya Williams-Belfort On The Impact Of Supporting Black Business
By Dominique Norman
Harry Styles’ Red Carpet Looks Have One Thing In Common
By El Hunt
Get Even More From Bustle — Sign Up For The Newsletter