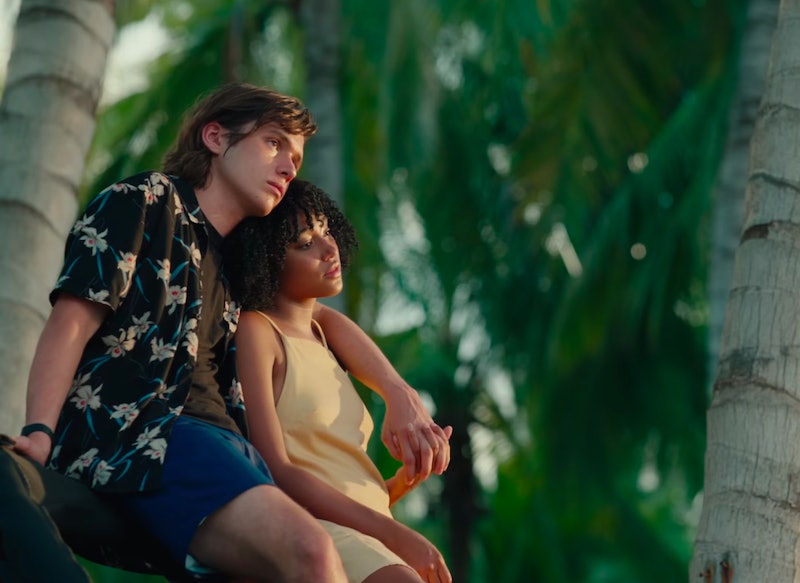 There are a lot of things that can go wrong when adapting a YA novel. Bringing a beloved book to the big screen is a tricky thing, especially when the book is mostly inner monologue or written conversations, as is the case with Everything, Everything. The book by Nicola Yoon features a budding romance that starts on Instant Messaging — not exactly the stuff movies are made of. As a result, screenwriter J. Mills Goodloe had to make some serious changes to the book. That said, most of the Everything, Everything movie vs. book differences are pretty tame with one notable exception: the race of the protagonist.

Normally, when a book is adapted to the big screen, the most noticeable changes will be to the plot. And that is somewhat true with Everything, Everything. For example, Olly, the boy next door, is not a parkour enthusiast in the movie, and he and Maddy text on smart phones, not computers. There's a slightly different pace to their love story in the film, as well as a few tweaks to Maddy's medical condition that keeps her from going outside (she falls ill in the movie after stepping foot outside for the first time). Overall, the plot tweaks are pretty much what you'd expect from an adaptation. And none of the differences between the Everything, Everything movie and the book change the soul of the love story.

The biggest change made to the book in Everything, Everything is Maddy's race. Instead of being half Japanese and half African American, in the film Maddy is half white and half black. The change was no doubt done to reflect the heritage of the movie's star, Amandla Stenberg, a young biracial actor who lends a bit of celebrity to the YA adaptation. The shift in Maddy's ethnicity has no real effect on the plot, as the story's interracial romance remains very much in tact. The change is notable, however, because it reflects how limited Hollywood can be when thinking about diversity.

I doubt that the filmmakers went out of their way change Maddy's race in Everything, Everything. After all, the movie was made within the Hollywood system, where black Asians generally don't lead mainstream movies and interracial relationships on the big screen are mostly shown as black and white — literally (Loving, Save the Last Dance, Guess Who). In fact, good luck trying to find any evidence in film that black Asians exist.

Still, by featuring a black, biracial protagonist and star, Everything, Everything is breaking down barriers in Hollywood. It's also conforming to Hollywood stereotypes of how audiences interpret ethnic diversity on screen. It's a bittersweet victory, but also a step in the right direction. I guess, as with any film adaptation, there are some things that simply don't make it. In Everything, Everything, it just happened to be Maddy's Asian heritage.