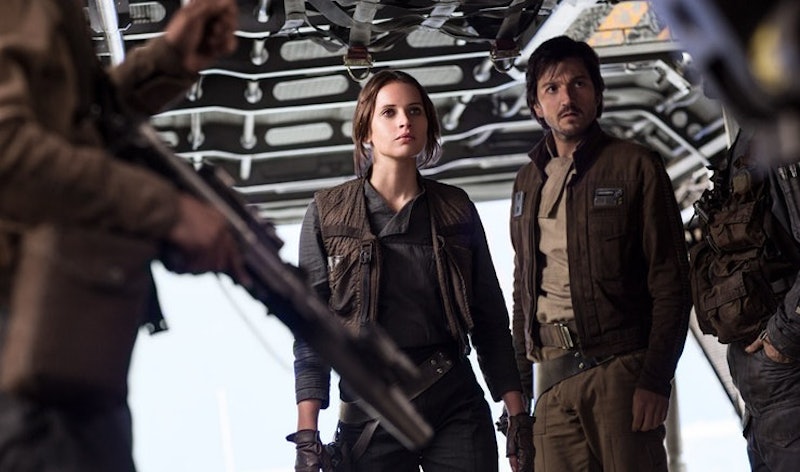 The time has come: No, not summer time, but the time when new shows and movies come to Netflix, and leaving the streaming site throughout June and July, to bribe you into staying indoors instead of playing in the sun. Don't get me wrong. I'm sure the beach and the pool are equally fun places to spend your time, but, come July, you'll be able to watch Rogue One: A Star Wars Story on Netflix. Look into your heart, friends. Do you really want to leave the comfort of your home after that? I know, I know. It's quite a dilemma.

But Rogue One isn't the only amazing thing that's on its way to the streaming site. We've got classics like Titanic, finales like Pretty Little Liars 7B, and a whole mess of comedy specials and Netflix originals to tempt you into making a you-sized dent in your couch instead of lounging by the nearest body of water. Personally, I'll be watching The Worst Witch like it's going out of style, just for the sheer nostalgia value, but I know there's got to be something below that will make even the most outdoorsy person reconsider that hike. Whether you're more into movies or more into TV shows, we're all into Netflix. And these shows coming in July will remind you why.

I remember watching this film on one of my first plane rides. The relationship depicted between a young troubled boy and his orca is beautiful.

A woman and her daughter take the journey of a lifetime to find their missing father and husband. You don't want to miss this one.

Xiao Man and Da Bao investigate some of the most dangerous and time-sensitive cases in this Singaporean drama.

Nicolas Cage plays a depressed con artist who is inspired by his daughter to live life just a little differently for his own sanity.

A deal goes wrong by a former lover, and then they learn they have to be on good terms before someone gets hurt. Sounds complicated.

It's a great show for kids to learn that there are truly no limits to what you can do.

Marine biologists and ad executives team up to study the effects of global warming. Perfect for the documentary lovers out there.

This comedy is a perfect example of what not to do when divorce papers are served.

If you're a big Jackie Chan fan, you'll love watching him battle an army aboard a dangerous train.

A man is sent packing by choice from a Bachelorette-type show after he discovers that his dad has passed away.

Barbara Streisand stars in this musical about a young widow named Dolly and a professional matchmaker.

Punks turn into legends in this story of how Blondie truly came to be.

The most famous grupero band in Mexico is created when five young people seek a way out of their personal drama.

No, not the animated film. The childhood favorite about a girl cursed into an everlasting sleep made its return in 2014. See what happens when her prince finds her before it's too late.

If you remember your first awkward kiss, then you'll feel for the kid who's taking everyone's pointers on how to get it just right with the girl of his dreams.

Editor's Note: A previous version of this story incorrectly referred to Unriddle 2 as a Korean drama, instead of a Singaporean drama.

More like this
Here’s Everything Coming To & Leaving Netflix In August
By Jake Viswanath
UK Viewers Are Now Able To Board Seth Macfarlane’s 'The Orville'
By Frances Stewart
What’s New On Netflix: 'Never Have I Ever' & 'Indian Matchmaking' Return
By Arya Roshanian
What’s New On Netflix: 'Bridget Jones’s Diary' & 'Monster-in-Law'
By Arya Roshanian
Get Even More From Bustle — Sign Up For The Newsletter