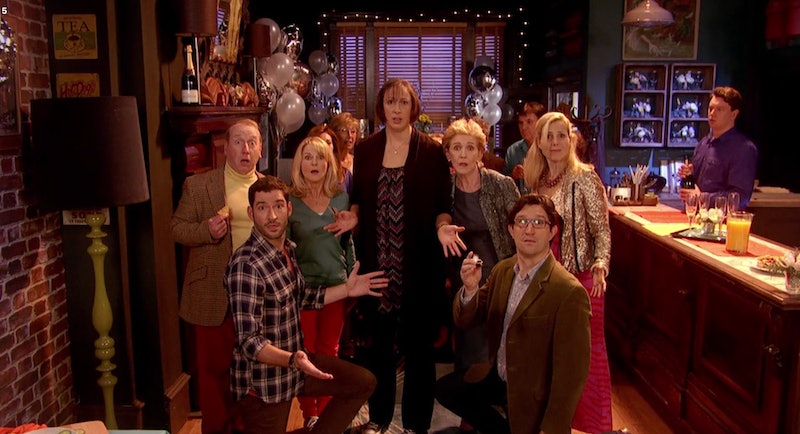 Can you believe it, a whole decade has passed since comedian Miranda Hart graced British TV screens with her hilarious BBC One sitcom. The series last aired in 2015 with a Christmas special, and to celebrate this milestone Hart and the rest of the cast are reuniting to reminisce and to treat fans with some behind the scenes anecdotes. Such fun! So here's everything we know about the one-hour Miranda special.

The special will see Hart join co-stars Tom Ellis, Sarah Hadland, Patricia Hodge, and Sally Phillips on stage at The London Palladium as they look back over their time on the sitcom. According to a BBC press statement, the "show will feature a host of treats and surprises," including stories from behind the scenes and recollections of some of the most iconic moments in the series.

"What happened with my sitcom and comedy alter-ego over the last ten years has been unexpected to say the least, so it's very moving for me to have the chance to celebrate and thank my cast and the fans from The Palladium stage," Hart told BBC One. "We are hoping to put together what I call such fun hour of television for them all."

The only thing that seems to be under wraps, for now, is an official air date for the Miranda special. Although, the broadcaster did announce yesterday (Oct. 16) that it will air on BBC One later this year. Bustle reached out to a BBC rep for more info on an air date, and they say it's still to be confirmed.

As exciting as this special is, it's hard not to be a little disappointed that this won't be a one-off episode. Like a chance to see all the characters are getting on ten years on, especially when it comes to Miranda and Gary (played by Ellis) after that Christmas special.

Although there is a slight possibility that a fourth series of Miranda could become a reality. After The Sun published an article suggesting that a new series was underway, Hart tweeted: "To confirm re The Sun, I don't know where it came from that there's a new series of Miranda. I write & play her & she's still on honeymoon!" As Radio Times writes, she also tweeted "that she had 'thought about' bringing the hugely successful show back, 'but that's all'."

If Miranda does indeed return, it'll only be on the small screen. There will be no Downton Abbey-esce journey to cinemas, according to Hart. "I considered it and worked towards writing a script. Then I kept thinking, these films never work," she told BBC Radio 4 Extra (via BBC News). The comedian continued:

"The transition from a studio sitcom to a film never works — The Inbetweeners is a perfect example of it working brilliantly because it was filmic anyway. But what are [the characters] doing on location? And we're not hearing laughs [from the audience], so it's such a different thing."

So a film definitely isn't on the cards, but it seems that a fourth series of Miranda could very well be a possibility. So exciting!