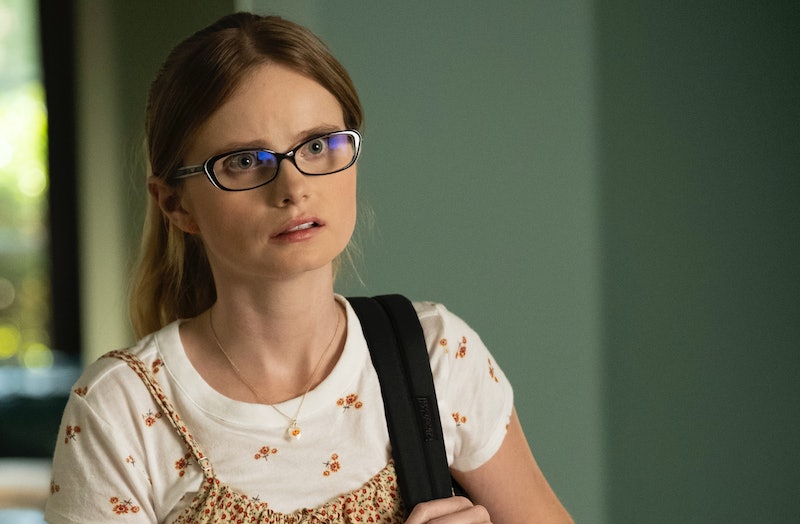 Less than a year ago, Everything's Gonna Be Okay star Kayla Cromer was sitting on stage at a Freeform event feeling like someone had punched her in the gut. She'd just taken a risk and revealed to the audience that she's on the autism spectrum. Divulging that information in Hollywood, Cromer tells Bustle, "can either make or break your career depending on people's perceptions." But given the film and television industry's long-standing — and much-criticized — tendency to cast neurotypical actors to play autistic characters (see: The Good Doctor, Atypical, and even the Oscar-winning Rain Man), she wanted the chance to show that autistic actors are just as capable as anyone else.

"By not casting people with autism to play autistic characters like those, they're acting like we don't exist," Cromer says. While she adds that playing characters who are dissimilar from you is part of being an actor, she says neurotypical actors portraying autistic people aren't able to connect to their roles on a fundamental level. "All they've done is research. They haven't walked in our shoes every day. It just comes down to that."

Cromer hopes to make space for more autistic actors in her role as Matilda, a 17-year-old high schooler with autism on Everything's Gonna Be Okay. The show comes from creator, writer, and executive producer Josh Thomas, who plays Matilda's 20-something Australian half-brother, Nicholas. He's visiting his family in America when their father announces that he has cancer and dies shortly thereafter, leaving Nicholas as the ill-equipped guardian of Matilda and her 14-year-old sister Genevieve (Maeve Press). Like Thomas' previous show, the critically adored Please Like Me, Everything's Gonna Be Okay blends the joy, sadness, and awkwardness of life. It also makes Cromer the first autistic actor to portray a lead character in a TV show.

Thomas said in a BUILD Series interview that while the choice to cast an autistic person in the role of Matilda started as the "ethical and woke" thing to do, "it was so much better to get the authentic person doing the authentic thing."

Cromer agrees. To her, getting autism right on TV is actually pretty simple — and something Everything's Gonna Be Okay manages to accomplish. "It's the best that one show can do, because Matilda is only one character with autism. She doesn't represent the entire autistic community, because everyone with autism has different forms of autism or has different levels, different quirks," she says. "By hiring an on-the-spectrum actress to play [Matilda], it just makes the performance more accurate and more honest and more respectful."

It's still a performance, though, and Cromer says she and her character do have a few key differences. For example, Matilda is a talented composer who plays her piano when she's stressed or overwhelmed, while Cromer doesn't know how to read music. However, both are "high-functioning" (a term Cromer admittedly hates), and Cromer can relate to the loneliness that Matilda experiences. "I'd say we're both outcasts in high school," she says. "[Matilda's] isolation was more by choice because she prefers that. With me, I was isolated by my peers through bullying because they already knew I was different. But we both went through that same form of loneliness."

With that experience behind her, Cromer is optimistic about the future ahead of her. She wants to portray a Marvel superhero, like Cloud 9 or Squirrel Girl (she claims she already has the buckteeth); join a major action franchise like the Fast and the Furious; and do a guest spot on one of her favorite shows, Law & Order: SVU. Another item on her acting bucket list? Playing a neurotypical character. "I would like that opportunity to prove the industry wrong," Cromer says. "Whatever they throw at me, I will do."

More like this
Viktor Hargreeves’ Coming Out Scenes Are The Sweetest Part Of Umbrella Academy Season 3
By Gretchen Smail
Johnny Sibilly Makes “Gay Shit”
By Hugh McIntyre
Mel C, Courtney Act, & Rob Beckett Will Be Judges On ITV’s New Drag Show
By Sam Ramsden
Why Simone Ashley Had To Study Snails For Intimacy Training, Pre-‘Bridgerton’
By Grace Wehniainen
Get Even More From Bustle — Sign Up For The Newsletter