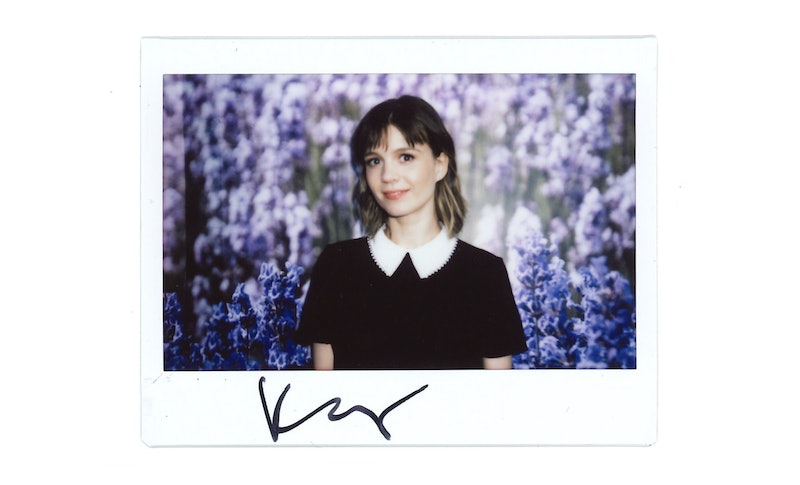 When celebrities hang out with Bustle editors, we want to give them the chance to leave their mark. Literally. So we hand them a pen, a piece of paper, a few questions, and ask them to get creative. This time, Evil star Katja Herbers is leaving her mark in the Bustle Booth.

If the idea of demons walking among us freaks you out, you might be spooked watching CBS's horror-drama Evil. And if you ask Evil star Katja Herbers if she thinks the potential demonic activities her character investigates on the show could be real, she'll tell you a semi-spooky, semi-hilarious story of her own.

"The more time I spend reading these scripts and filming these storylines, kooky things start to happen to me," says Herbers, who plays the resident psychologist on a team of experts investigating requests for official Catholic church exorcisms. "Yesterday in the morning, my phone started playing Maroon 5, which is something that I’ve never in my life listened to, and then it bought something on Amazon and made a ZocDoc appointment. I was like, is my phone possessed?"

Whether her phone needs an exorcism or a full overhaul of her passwords is up for debate, but Herbers is quick to clarify that working on Evil is far from traumatizing. "We're having a lot of fun," she says of the cast, which includes costars Mike Colter, Aasif Mandvi, and Michael Emerson. Herbers studied psychology in college, so she's also been enjoying doing some supplementary reading into the real science behind her character Kristen Bouchard's cases. Still, there's something about the material — as it deals with evils both human and occult — that's sticking with her. "I’ve had a few nightmares. It’s hard!" Herbers says with a laugh.

Working on a show that centers on possible demonic possession and religion was eye-opening for Herbers, who was raised secularly in Holland. While filming the first Evil episode where an actual exorcism takes place, a consulting monsignor was on set to ensure accuracy. (The Catholic church still administers the rite of exorcism today, when it's deemed necessary.)

"He was like, 'Yeah, this is how it goes,'" Herbers remembers. "And I was like, 'This is how it goes?' This is brutal. It’s violent. It’s horrible.'" She plumbed the depths of YouTube to watch videos of allegedly real exorcisms to find out — something she does not recommend. ("Just watch our show," she advises.) Herbers knew going into the series, however, that creators Robert and Michelle King weren't out to mock religion or the devout. "We have religious people on the team, so in no way is anyone making fun of anyone’s perspective," she says.

If she has her way, however, Evil could dip into satire territory in the future. "I’m interested to see, maybe in the second season we’ll go visit the White House or something," she says wryly. "See how we can explain that."

Learn more about Herbers in her Bustle Booth questionnaire below.

More like this
In 'Paradise Square,' Tony Nominee Joaquina Kalukango Tells A New Civil War Story
By Kate Dwyer
Everything We Know About When To Expect Money Heist: Korea Part 2
By Kadin Burnett
The Umbrella Academy Cast Breaks Down That Wild Season 3 Finale
By Gretchen Smail
Viktor Hargreeves’ Coming Out Scenes Are The Sweetest Part Of Umbrella Academy Season 3
By Gretchen Smail
Get Even More From Bustle — Sign Up For The Newsletter