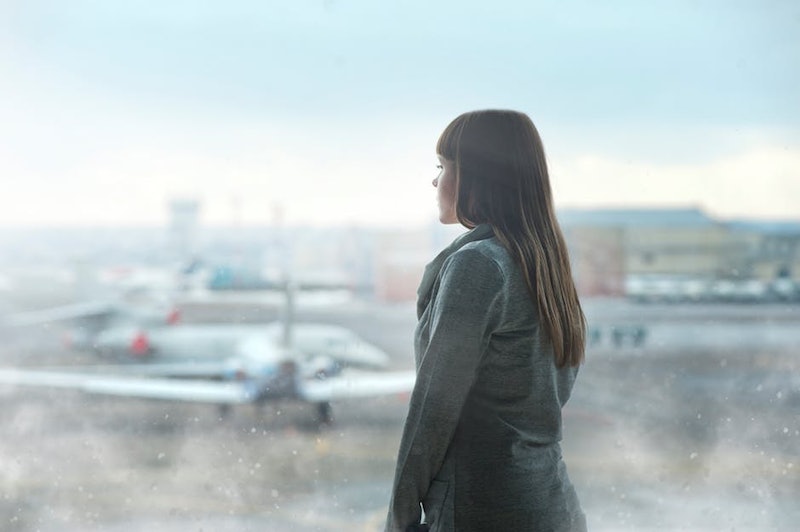 It seems like every few months brings a new story about sexual assault on an airline flight. In March, a woman on a flight from Tampa to Toronto claimed she was sexually assaulted by a fellow passenger. In April, a woman was reportedly groped by an intoxicated man on a flight while her daughter sat right next to her, and the flight attendants kept bringing the man alcohol. In July, a woman claimed she woke up to a man masturbating next to her on an American Airlines flight. And these are just the reports that make it into the news — meaning that it's likely that many more incidents occur without attracting media publicity.

Though they told Slate that they had "40 open cases involving sexual assaults on aircraft in 2015," the FBI doesn't specifically track airplane sexual assault in their national crime statistics. And there's no record of how many reports are made to local authorities instead of the FBI — or to crews who then don't pass the information on to law enforcement at all. Airlines themselves, according to a specialist investigation in 2014, habitually refuse to disclose their own statistics about sexual assault incidents on board their planes. Add this to the fact that the Bureau of Justice Statistics reports that 75 percent of sexual assaults go unreported, period, and it begins to seem like the issue is much larger than many had previously realized.

In fact, not understanding the scope of the issue is one of the biggest obstacles preventing airlines from making progress. "Part of the problem," Sara Nelson, international president of the flight attendant association AWA-CFA , tells Bustle, "is that we don't have a full understanding of how much of a problem this is on our planes. We have anecdotal information, we have reports from some passengers who have been willing to stand up, but this is a unique crime, and the victims of it have unique needs." So how do we combat a sexual assault problem when we're not even sure of its scope? Bustle talked to several experts about why sexual assaults occur on airplanes — and what airlines can do to make air travel safer for women.

More like this
Here's Why Your Nose Runs When You Eat
By Carolyn Steber
Ben & Jerry’s & Tony’s Chocolonely Are Launching 4 Responsible New Flavours
By Sophie McEvoy
Your Daily Horoscope For August 18, 2022
By Alexandria Lettman
15 Matching Halloween Costumes For You & Your Dog
By Kirsten Nunez
Get Even More From Bustle — Sign Up For The Newsletter