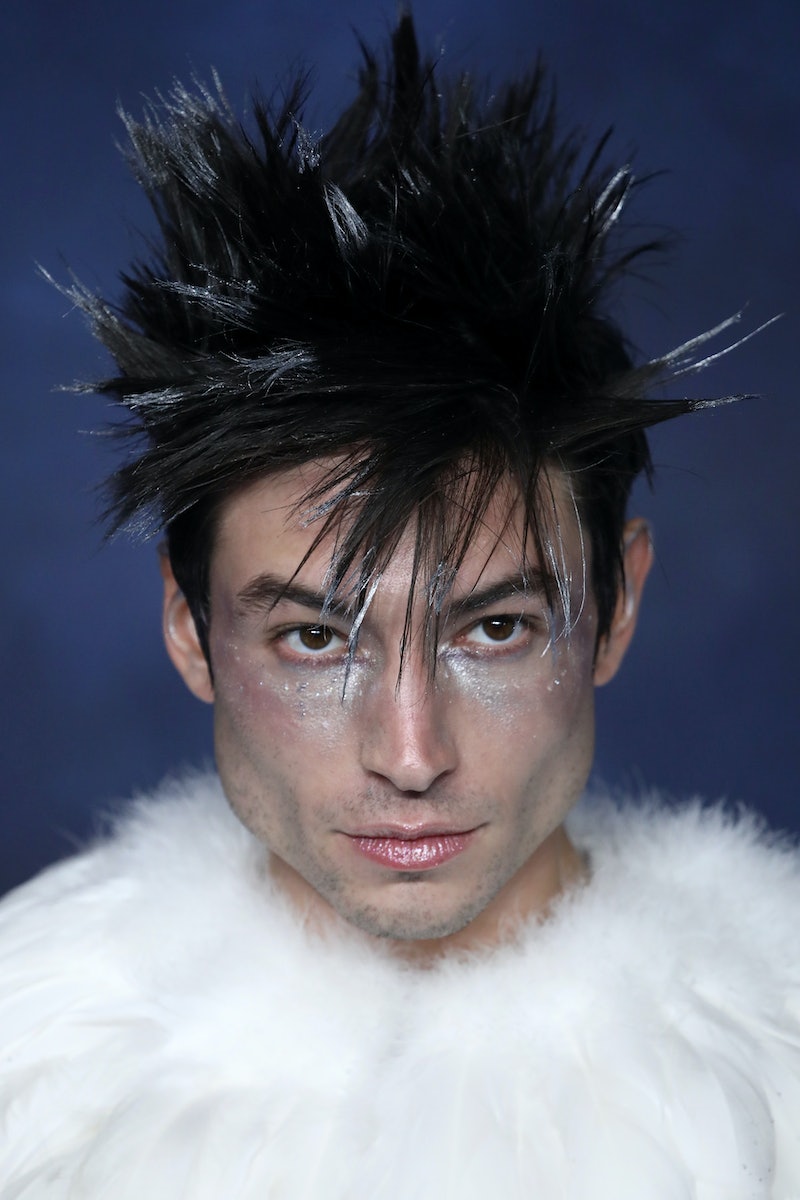 Ezra Miller needs to be in every film from now on IMO, just so I can see what he turns up wearing at every premiere and press conference. After stepping out as Toadette at Comic Con and later in a couture Moncler look for the recent Fantastic Beasts premiere, his recent outfit has me well and truly shook. At the London showing of Fantastic Beasts: Crimes of Grindelwald, Ezra Miller dressed as Hedwig (Harry's snowy owl) in the throes of death. First of all, RUDE. And second of all, I’m kind of into it.

Miller somehow managed to get Givenchy — a.k.a. Meghan Markle’s wedding designer — to create him the ultimate cosplay outfit with a Hedwig-approved cosy feathered jacket. Underneath that, he wore an all white suit and rounded off the look with frosted hair tips, silvery make-up, and an unusual owl ring on the tip of his fourth finger. You know, in case you didn’t get it.

However it was his hands that immediately caught everybody’s attention, as they were inked with twin text triangles that repeated one of Harry Potter’s Unforgivable Curses over and over again. If you look closely, you’ll be able to make out that it’s just one long string of the killing curse "Avada Kadavra," inked until Miller ran out of space.

If you’re a fellow Potterhead, I’m sure you gasped as loud as I did at the audacity. If you can cast your mind back to the fate of the greatest gal Hedwig, you’ll remember that she sadly met her end in the final HP book; Harry Potter and the Deathly Hallows. After being forced to flee from Little Whinging, a number of people were sent out as Harry decoys to distract the Death Eaters while the real Harry snuck off with Hedwig and Hagrid on Sirius’ motorbike.

Devastatingly though, Hedwig was hit and killed by the very curse Ezra Miller stamped all over his hands. So, the man genuinely dressed up as Hedwig being smacked with the killing curse. Aesthetic: literary childhood trauma, but make it chic.

Owl-related magical deaths aside, there was another geeky aspect to Ezra Miller’s outfit which seems to have gone largely unnoticed. If you zoom in on his white boots, you’ll be able to pick out some cursive script on the toes of them.

Like Harry, Ron, and Hermione, he’s pledged his allegiance to Dumbledore’s Army with those very words on one foot while the other reads "still recruiting."

I wasn’t the only one having a moment over Ezra Miller’s outfit. His co-stars Eddie Redmayne and Dan Fogler ambushed him on the carpet to do what I was dying to do the moment I laid eyes on that big coat — they worshipped it and also blissfully sunk their fingers into it.

Honestly, look at that Redmayne and tell me that isn’t the face of a man terrified of his own joy.

Although I’m thrilled that the new instalment of Fantastic Beasts is upon us, I’m also low-key devastated that the press tour is coming to an end. I’ve got all my fingers and toes crossed that his character survives the gritty prequel to the Harry Potter series, just so he can bless us with more Potter-related outfits. I for one want to see Miller’s take on the Whomping Willow next time round.

Ezra Miller stars as Credence Barebone in Fantastic Beasts: Crimes of Grindelwald, which will be released in UK theatres on November 16.

More like this
23 Times Meghan Markle Dressed Just Like Princess Diana
By Bustle UK
Harry Styles' New Gucci Collab Is Serving Woodland Chic
By El Hunt
Everything To Know About The Musical ‘Joker’ Sequel – & Lady Gaga’s Role
By El Hunt
Here's How To Stream 'Downton Abbey: A New Era' & The New 'Downton' Channel
By Alice Broster and Sam Ramsden
Get The Very Best Of Bustle/UK