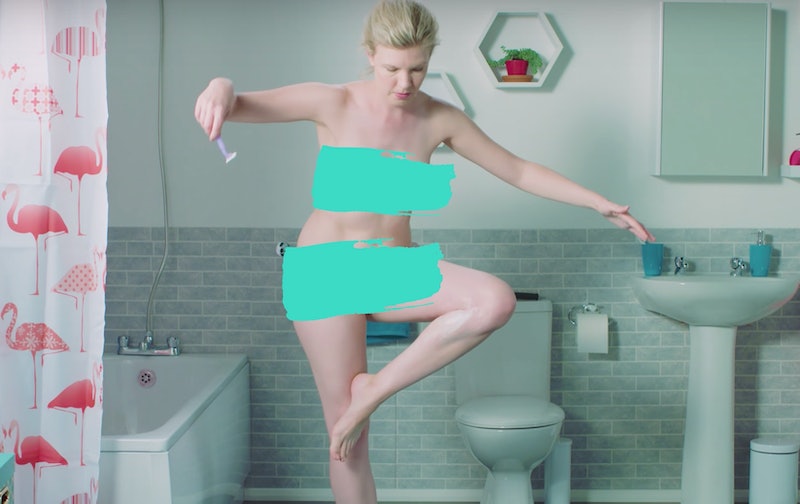 Society and social media police and censor women's bodies — this isn't exactly groundbreaking news; but what does make headlines is when the biggest social media platform in the world censors a woman's body for no clear reason. That recently happened when Facebook banned a shaving ad for implied nudity, elaborating that the ad wasn't approved because they don't allow images that are "sexually suggestive or provocative."

The ad, for the brand Friction Free Shaving (a razor delivery service), is harmless and silly. It features a woman doing "shoga" — shaving yoga. She gets into uncomfortable positions to get to all those hard-to-reach spots and hopefully achieve smoother skin. As can be expected, she's in a bathroom, and there are two modesty bars covering her chest and down-below regions.

This is apparently the "implied nudity" that was "sexually suggestive or provocative" that Facebook spoke of.

Friction Free Shaving co-founder Briar Keen had thoughts on this, per the Daily Mail: "We wanted to move away from traditional and outdated women’s shaving ads that are overglamorized, sexualized, and unrealistic. We don’t think that a woman shaving is anything to be ashamed of and find it sexist and deeply offensive that Facebook have banned our ad on these grounds."

Is the ad Facebook-friendly or not? Decide for yourself:

If Facebook's ad policies were applied evenly to advertisers across the board, complaints would be unfounded. The problem is the lingerie ads that'll show up in your news feed. Or the ads attempting to entice you to try "naughty Christian girls" for free, calling you a "fat bride" who needs help in the weight loss department, or the ads telling me I could make a killing selling my eggs. Dearest Facebook, I may not want children, but I like my eggs right where they are, thank you very much.

It might seem, then, that social media actually doesn't have a problem displaying women in a sexual and revealing manner (lingerie), along with literally selling their bodies money (naughty Christian girls), telling them they're insufficient due to their weight (fat bride), or suggesting what they do with their bodies in a rather obtrusive, invasive manner (selling eggs).

The only conclusion I can come to is that it was a man who rejected the ad, or someone else who doesn't understand how difficult it is to shave your knees, or the pure anger and hate that fills your soul when you spend 20 minutes meticulously shaving only to discover a strip of hair you missed when you step into different lighting.

Facebook told BuzzFeed News in a comment that they're "working with the advertiser to find a solution that is compliant with our advertising policies" — polite, professional, and diplomatic. Except there still wasn't a problem to begin with.

In that first scenario, Facebook later apologized for the oversight and later re-approved the video of breast exams... but what about the countless others turned away?

And just so Facebook doesn't feel singled out, let's not forget the many times Instagram has also censored women's bodies, like that one time they got really uncomfortable over menstruation, and breastfeeding, and post-baby bodies, and — get this — pubic hair! We can't be seen shaving and we can't be seen in all our naturally hairy beauty. We're screwed.

One instance of female body censorship may not seem like something to pitch a fit over; but these individual instances add up, and they're what contribute to our culture's many misguided beliefs about the female form, including:

If we don't stand up for what's right, nothing will ever change. And right now, we're standing up for shaving, because that sh*t is annoying and Friction Free Shaving's commercial was spot-on.