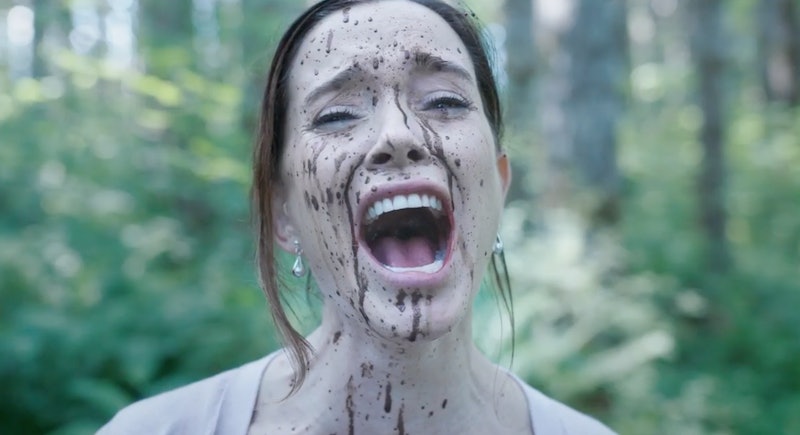 Facebook Watch just released the trailer for their new show The Birch and it just might make you cautious around trees. The platform's latest horror series follows three teenagers and a blood-thirsty monster lurking in the woods called the Birch. As showcased in the 30-second teaser, which you can watch below, the Birch not only looks terrifying, but she's also not afraid to pray on the vulnerable.

The Birch, which has somewhat of a Blair Witch vibe, stars Ocean's Eight's Midori Francis as Lanie, American Vandal's Xaria Dotson as Evie, and Black Mirror's Dempsey Bryk as Thurston. According to the series' official description obtained by Bustle via press release, the lives of these three teenagers — Lanie, Evie, and Thurston — intersect when the Birch arrives in the woods. "Sworn to protect the vulnerable wherever she is summoned, the Birch demands a dangerous toll for her services," the description reads. "Our heroes grapple with the grim realities of making her acquaintance — both as friend and foe."

According to Deadline, the series is based on the short The Birch, which won a 2017 Webby for Best Drama: Individual Short or Episode and was also featured at the 2017 Tribeca Film Festival for Tribeca N.O.W. Special Screenings. The outlet also reported that the Birch will have a complicated relationship with Lanie, Evie, and Thurston. Per Deadline's September 2018 post about the series, viewers will see "a dark relationship between a synonymous monster protector in the woods and a pure-hearted teenager who summons her in a time of crisis."

The Facebook Watch series will drop one to three episodes weekly, with each episode being told from multiple character perspectives. There will be 15 episodes in total, with The Birch set for an Oct. 11 premiere at 4 p.m. EST on Facebook Watch.

For those unfamiliar, access to Facebook Watch is free for all Facebook users. All you have to do is look for the "Watch" tab in the upper left navigation menu on your computer screen. The tab should also be located on the bottom your Facebook app, if you're using a mobile device. If not, click the three lines on the bottom righthand corner of the screen and find "Watch."

Once you have access, you can choose from "Editor's Picks," "Top Picks," "Search," and "Watchlist." If you're not sure what you want to check out, you can search for the video or series you're interested in. However, if you're signing on for a specific show, like The Birch, you'll want to look under "Facebook Watch Shows." Facebook Watch is a hybrid of YouTube and streaming services like Netflix, which means there's a lot of video content to sift through. That said, viewers can't access cable or watch live TV through Facebook Watch.

The Birch is just one of a handful of new shows set to premiere on Facebook Watch this October. The platform is also launching Limetown, a new series starring Jessica Biel with a similar sinister vibe. Though Limetown doesn't involve a menacing, tree-like creature haunting teenagers, it does involve an entire town disappearing from one day to the next.